Building Chris-Craft: Inside the Factories 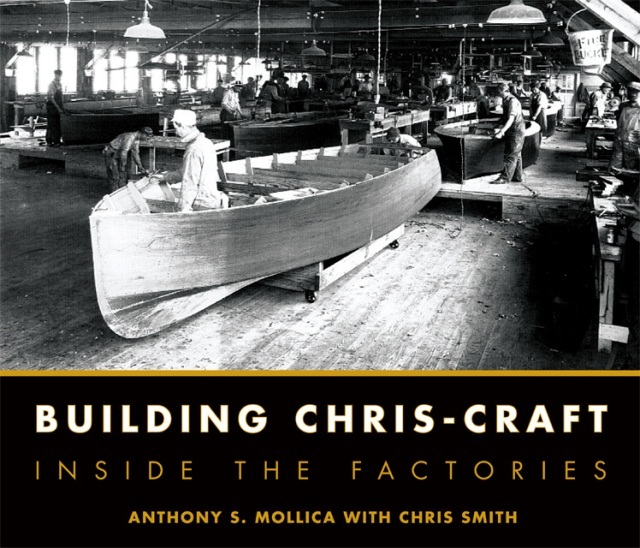 The book jacket refers to Chris-Craft boats as “a touchstone of American ingenuity and leisure” and on both counts this is not hyperbole. Claiming the title of America’s oldest manufacturer of standardized powered recreational boats, the quality and appeal of the firm’s boats was such that a large enough number of buyers subscribed to the advertising slogan “Without a Chris-Craft, life at a shore resort or summer home cannot be called living” that the company held—for several decades—the rank of world’s most popular motorboat purveyor. Whether an affordable 8 ft Pram or a mega-dollar 65 ft Constellation motor yacht, from fishing to racing to ocean-going pleasure boat the company covered all ends of the market and all lifestyles.

You could consider this book the back story to Mollica and Jack Savage’s 2001 beautifully illustrated history book Chris-Craft Boats (same publisher, ISBN-13: 978-0760309209). That book too benefited from the input of company founder Christopher Columbus Smith’s grandson, Chris. His involvement in the new book is even greater which is only fitting as it looks at the very things Chris dealt with his entire professional life, the inner workings of the company both in terms of business and philosophy as well as the design and building of the boats. Mollica, a lifelong boater (two national sailing wins) who has another 11 boating titles to his name and is a trustee of the Antique Boat Museum in Clayton, NY, was a history teacher by trade for some 40 years before he moved into visual communications (SUNY) until his retirement in 1996. Both the ability to properly research a subject and then present it engagingly result here in another most worthwhile book. Boat lovers, obviously, will be drawn to it but so will readers with interests in American industrial culture and even readers who may not have any specific boating interests but who just want to know (to borrow the title of a popular American documentary TV series) “how it’s made.”

It should be pointed out that the book’s core focus is on the 1920s to (only) the 1960s, including military craft. The early history—from the first boat from around 1874—is covered in some detail but the post-1960 history not at all. That was the year the company that had been family-owned for 86 years passed into the ownership of National Auto Fibers (grandson Chris being the only family member to make that transition) which would lead to multiple subsequent owners and reorganizations—and a prosperous present.

The book covers every aspect of boat building, be it the purchase of raw wood for the frames to trucking the finished boat to its new owner. Chris-Craft was one of the few companies to keep detailed records of all its boats for some 60 years, the “Hull Cards.” Its archives were given to the Mariners’ Museum Library at Christopher Newport University (Newport News, VA) in 1986. The more than 350 linear feet of material constitute one of the most complete histories of a boatbuilding company, and this book draws heavily on that material as well as the recollections of former employees. It also adds to the record a large number of previously unpublished photos and new insights into the firm’s methods and techniques and even decision-making process. There is also fresh detail on the relationship between Smith and Garfield Wood as competitors—in racing and in business—and then as partners.

The photos and illustrations (mostly b/w) cover all phases of design and construction and there are also showroom and promotional photos along with ads, brochures, and several technical illustrations. Appended are shop terms, factory locations, and such minutia as moisture content range for wooden components as well as criteria for wood selection for structural members. A Resource section lists books and organizations; the Index is a bit on the light side but contains the key people and subjects. Except for the inexplicably yellow endpapers the design is not only topic-appropriate but overall very nicely conceived and executed.

When all is said and done, the book accomplishes exactly what mattered to the author/s: to capture, and to celebrate, a form of applied art and craft that was once so commonplace as to be taken for granted. It also gives proper credit to three generations of the Smith family’s way of doing business. Both are, sadly, all too often under-appreciated—until they have disappeared!