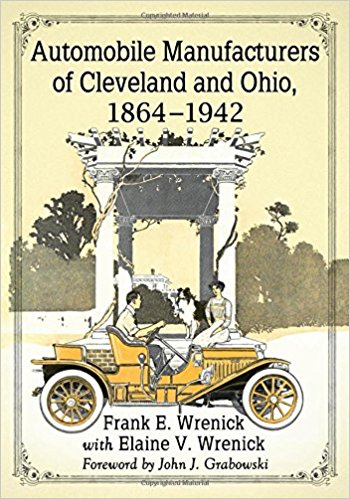 Several cities and states have made the for the title “Motor City,” but I’ve always believed that one city and state truly rivaled Detroit in the early days of the automobile industry—Cleveland and Ohio. Now there’s a new book that validates that claim and does it quite well.

Frank Wrenick, a long-time transportation historian, with assistance from his wife, Elaine, has produced the definitive book on the role of Cleveland and Ohio during the early days of the automobile industry. This is not a coffee table automotive book; it’s intended for the serious researcher. That’s not to suggest it’s dry. Although the book is well researched and documented, it’s well written in a highly readable style. Illustrations and photos are black and white, but that’s not a shortcoming.

I knew that the Cleveland automobile era ended in 1932 when the last Ford was built in that city but had no idea that its history extended back as far as 1864 and that during that span of time 550 companies existed to build automobiles! A small but significant number of the cars were Classics (as defined by the Classic Car Club of America); most notably Peerless, Stearns-Knight, Winton, Jordan, Owen- Magnetic and Templar. Another legendary marque had its beginnings a few miles east of Cleveland in Warren, Ohio—Packard. That’s quite a gathering of motorcars! Among the famous non-Classics built in Cleveland and Ohio were Baker, Crosley, and Willys-Overland.

The book includes every automobile that was built in Cleveland and Ohio, including cars that existed only as prototypes or didn’t even make it that far. Significantly, the book also looks at the automotive sup- pliers that were based in Cleveland, who also made their impact on the automobile industry.

I commend the Wrenicks on a fine addition to automotive history and McFarland & Company for continuing to publish such books.

This review appears courtesy of the SAH in whose Journal 284 it was first printed.

Automobile Manufacturers of Cleveland and Ohio, 1864–1942
by Frank E. Wrenick with Elaine Wrenick

Squire: the Man, the Cars, the Heritage »
« Desert Boneyards: Retired Aircraft Storage Facilities in the U.S.