Chassis 141, The Story of the First Le Mans Bentley 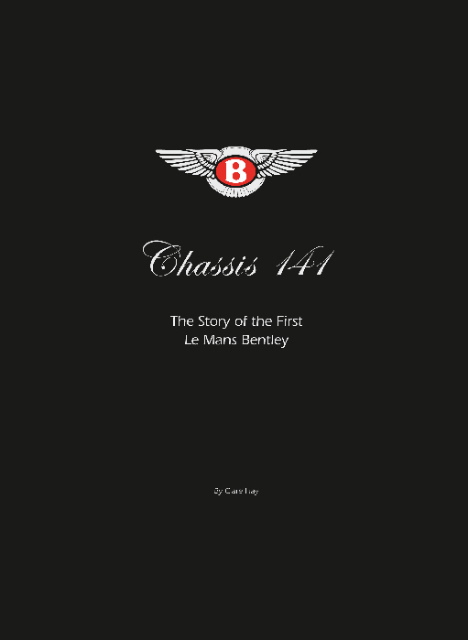 Hay has earned recognition as a pre-eminent chronicler of WO Bentleys from sweeping histories written about the Bentley firm during its early Cricklewood years. Painstakingly researched, these books include Bentley: the Vintage Years 1919-1931, Bentley Four and a Half Litre: Supercharged, and Bentley “Old Number One”. All are among the most definitive, respected canons of Bentley literature.

This particular book shines its laser beam on just one single car. (And, for the sake of avoiding confusion, readers be advised that C Hay has also previously published as M Hay.)

From record-breaker, to hauler, to full restoration, Chassis 141 tells the story of an important Bentley, specifically the car that established Bentley’s reputation as a competent racing machine. Its racing success led to the company’s commercial success, and without this car and this driver, who knows what the fortunes of Bentley, the company, might have been.

Originally owned by Bentley dealer/amateur racer John Duff and fielded at Brooklands, Le Mans and elsewhere, this car had a stellar racing career, setting the Brooklands Double Twelve record and then representing the marque—the only participant from Great Britain—at the inaugural 24 Hours of Le Mans. Its glory days forgotten, it ended up as a tow truck and still later with a shooting brake body built by an undertaker. Then it was left to rot until Tom Wheatcroft’s Donington Collection bought it for parts. That was in 1980, and not until 1987 did someone (Michael Ware) realize what they had here.

Since Hay took to publishing books only as limited-editions on a pre-subscription basis, the ability for ordinary mortals to acquire books like this one has become rarer than hen’s teeth. The book was launched at the 2009 Pebble Beach Concours in honor of its protagonist, chassis 141—which was making its own appearance at this august event (pun intended)—and is a much expanded coffee-table version of a more modest 48-page monograph originally published in 2003 by the W.O. Bentley Memorial Foundation (WOBMF). That booklet had been the result of private research, conducted by the author for the car’s owner, Peter Briggs of the York Motor Museum in Western Australia.

This new book is so tall it won’t fit (upright, anyway) into average-height bookshelves. It reproduces almost all of the text of the 2003 booklet, with minimal changes. But it is the bounty of photos that is the book’s main attraction with the quantity and selection enriching the text and extensive captions adding layers of detail. Excerpts from Bentley Sales Manager A.F.C. Hilstead’s 1953 book Those Bentley Days, about his involvement in the 1923 Le Mans race, are included.

Other chapters are contributed by the book’s editor, Australian motor journalist Graeme Cocks. Cocks was CEO of the now-closed (but said to be re-opening) Fremantle Motor Museum which featured vehicles from the family collection of Peter Briggs, 141’s current owner. It was through Briggs commissioning Hay to research the history of 141 that Cocks and Hay made contact, and it was Cocks, with his background in publishing, who suggested expanding the material into a large-format book. In addition to his piece on co-driver and Bentley Works Manager Frank “Sunshine” Clement (illustrated with a neat 1956 caricature by artist Frank Sallon) Cocks wrote the several chapters dealing with the circumstances of Briggs acquiring 141 from Tom Wheatcroft’s Donington Collection, the dismantling started and abandoned, and Briggs’ no-holds-barred resurrection of the car.

In addition to 141’s racing record, the appendices now include 3 Litre specs, Clement’s racing notes, a table of lap-by-lap times of the 1922 Brooklands Double Twelve record, 1923 Le Mans results, notes on dismantling/restoration, and some correspondence. It boggles the mind to realize how close this largely original chassis came to being scrapped, but the really inquisitive reader will probably find the narrative surrounding the years between Wheatcroft buying the derelict car and its identification in the 1980s by Michael Ware (Curator and Director of the National Motor Museum at Beaulieu from 1966–2001) tantalizing, while equally tantalizingly short on details like who?, what?, when?, and where? Some more detail can be found in Ware’s 2008 book Automobiles Lost & Found but even that doesn’t seem to tell all.

This book, 900 copies produced clothbound and 200 leather, can be expected to go o/p quickly—with little likelihood of being reprinted.

Adapted from a review originally written for the January/February 2010 issue of The Flying Lady, the periodical of the Rolls-Royce Owners’ Club (RROC/USA), which he edits.