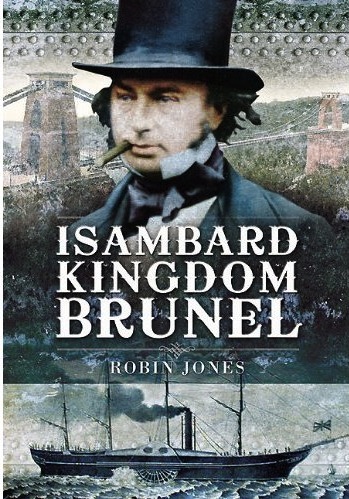 “Brunel was the catalyst which the Industrial Revolution needed to take it to the next stage.”

Isambard Kingdom Brunel—a colorful name for a colorful man. This celebrated civil engineer (1806–1859) was so important a figure in his day that a cool 143 years after his death he placed second in a BBC public poll to determine the “100 Greatest Britons.” Winston Churchill came first. One name is a household word the world over, the other not so much. And it’s not for a lack of literature or that the things he built, invented, or dreamt about didn’t make a dent in the universe.

Now reissued by a new publisher, this book was first released in 2006, the bicentenary of Brunel’s birth which was commemorated with a multitude of events, including a theater play (Mrs. Brunel: A Life With Isambard Kingdom Brunel, written and directed by Mike Lucas) and stacks of biographies. One of his biographers, Adrian Vaughan, published Brunel: An Engineering Biography that year. It took a somewhat revisionist view—some would call it provocative—of the man called “the Napoleon of engineers” and whom he let speak for himself in a 2010 book, The Intemperate Engineer: Isambard Kingdom Brunel in His Own Words. Both, and especially the latter, would be an ideal companion piece to read alongside Robin Jones’ book. 2010, incidentally, is not any old random year but the 175th anniversary of Britain’s first major railway, the Great Western Railway whose chief engineer Brunel became at the tender age of 26. And then he stunned his countrymen by proposing to extend it westward to North America by building steam-powered iron-hulled ships, of which he promptly designed and built three.

Nothing would be more tempting than turning this book review into a review of the multitude of Brunel’s engineering accomplishments. But, we’ll let the book/s do that and, for the sake of context, say here merely that he was the proverbial Renaissance man, combining a host of skills and interests, a Big Picture visionary who was not afraid of coloring outside the lines. In other words, a man you’d want to know about if you don’t already.

Bridges, tunnels, railroad infrastructure, ships, a pre-fab hospital even. Challenging projects, each in its way, and innovative but within the bounds of relatable parameters—unlike his “atmospheric railway” that attempted to move rail cars not by steam locomotive but atmospheric (vacuum) traction in which stationary pumps sucked air from a pipe running in the center of the track. Jones gets it just right when he says that Brunel’s actions “fast-forwarded the march of progress by several decades” and that “he rarely saw technology as just functional, and strove to entwine the fruits of the Industrial Revolution with the elegance and grace of the neo-classical painter.”

Jones is a widely published journalist who specializes in industrial archaeology and something called “heritage transportation.” He’s also been editor of Heritage Railway magazine since its launch in 1999 and is thus in a good position to work from a large frame of reference. With neither a Foreword nor Epilogue the reader can on the one hand safely infer what the attraction of this topic was to Jones but on the other is left to wonder what deficiency he perceived in the existing literature to propel him into action. Earlier bios (L.T.C. Rolt et al) were indeed rather fawning, glossing over what Brunel (“I shall not be unhappy if I do not reach the rank of Hero.”) himself had the good grace to call his “self conceit and love of glory.” 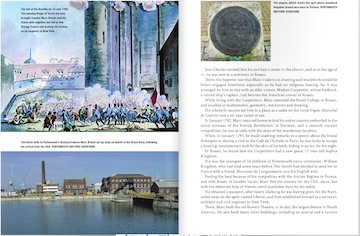 Jones does say that he intends his book as “a travel guide to some of the lesser-known delights [Brunel] has bequeathed to us.” Which is not to say that he doesn’t include such signature pieces as the Thames Tunnel, the Clifton Suspension Bridge (the longest span of any bridge in the world at the time), the SS Great Western (the first steamship to engage in transatlantic service) etc. etc.

He begins with a chapter on Brunel’s father, only proper considering the enormous influence he had, teaching Junior drawing and observational techniques from the age of four and also his native tongue, French, and the basic principles of engineering. The following 18 chapters then present specific projects, and a final chapter discusses an O gauge scale model of Brunel’s Broad Gauge. There is no Index so if you come across something that you’ll want to find again later, you’d best take notes.

The book is extensively illustrated with period and modern-day illustrations, including technical drawings and fine art. The writing is fluid and engaging, easy on the technical minutia, and presents a nuanced picture of a complex person.

The book, incidentally, is approved by Britain’s National Railway Museum, one of the largest and richest collections of railway related material in the world. Royalties from the sale will help fund the NRM.

Occupant Protection and Automobile Safety in the U.S. since 1900 »
« Fiat 500: The Autobiography