The Knife and Fork Man, The Life and Work of Charles Benjamin Redrup 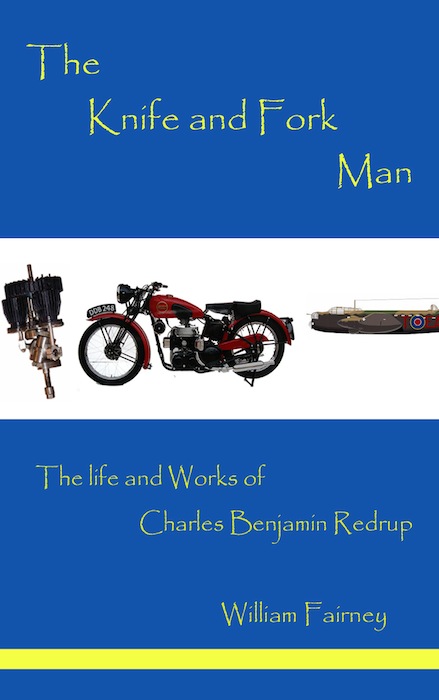 Charles Redrup enjoyed what most people would consider to be a very fortunate life. He was born in 1878 of wealthy parents who lived in South Wales, UK. Such was the availability of family money that all ten of the Redrup children (of which Charles was the first) were able to receive a good private education. Furthermore, at the age of just 16, Charles’ parents bought him a house near the family home in the coastal town of Barry. Money was provided to set up a workshop (including a lathe) for the boy to foster his growing engineering interests and, on top of all this, he was signed up as a Premium Engineering Apprentice (i.e., the parents pay the employer for the instruction) with the Great Western Railway for a five-year period.

From this beginning, Charles Redrup was able to pursue his love of engineering for the whole of his life and he did this mostly in England working sometimes for established firms and sometimes with a few private partners. In his time, he designed rotary, radial, and axial engines for motorbikes, cars, and aircraft. He started his married life in the aforementioned parental-gifted house and by 1925 Charles and Jessie Redrup had a family of eight.

Professor Fairney does his best to describe the huge variety of Redrup engines but struggles a bit. For instance, the first Redrup engine was a small, 2-cylinder rotary for motorcycle use (known as the “Barry” engine). The author provides a drawing, a photo, and a written description of the device but there are major discrepancies between the drawing and the picture and the description doesn’t do much to reconcile the two graphics. Fortunately, the patent (GB 1904 13314) can be easily downloaded from the Espacenet site to clarify the situation.

Redrup next turned his attention to engines for balloons and early aircraft. His first designs were described by him as “reactionless”, i.e., the radial cylinders (sometimes with a propeller attached; sometimes without) rotated in the opposite direction to the crankshaft and propeller. The first “reactionless” was a 2-cylinder development of the “Barry” engine with push-pull propellers, the next, according to Fairney was “a contra-rotating radial aero-engine which had three cylinders and an epicyclic gearbox” but the photograph provided shows this to be a 5-cylinder motor with bevel gears (much like the Siemens-Halske rotary). The author then claims this engine was later converted by Redrup to operate with 2-blade contra-props and he shows a photo of such an engine (3 cylinders, 2 props) to illustrate this but by now the reader is totally confused!

Those interested in aero engines are probably familiar with a couple of axial, air-cooled Redrup engines known as “Fury 1” and “Fury 2” developed in the late 1920s. They didn’t go into production but were flight-tested in Spartan aircraft. The full story is told in this book as is the saga of the Hart engine which was a 9-cylinder radial designed by Redrup in 1914. It showed some promise and was given some government encouragement regarding its further development. However, like so many of Redrup’s designs, problems and delays ensured that it never went into production which was regrettable because Great Britain was chronically short of home-grown engines for its WWI aircraft. Fairney claims that Redup filed a patent for this engine on behalf of the Hart Engine Company but no number is quoted by the author and there are no appropriate patents listed in the Espacenet database.

This book is characterized by many “asides” and “potted histories”, e.g., Redrup started making engines in his home town of Barry in Wales so a short expose of the coal exporting and brick manufacturing enterprises that made Barry a prosperous town is given. Similarly, brief accounts of the Royal Aircraft Factory, Crossley Motors, and Bristol Tramways appear as background to Charles Redrup’s association with them as his career unfolded. However, on the strength of his work for the A.V. Roe Company, the author devotes no fewer than 15 pages to yet another recounting of the R.A.F 617 Squadron “Dambusters” and their modified Lancaster aircraft which seems a little excessive!

In terms of presentation this book has pluses and minuses. The text, on quality glossy paper, is clear and easy to read although some minor imperfections indicate computer compositing. Illustrations abound—almost every page has a picture or diagram on it. In the middle of the book there are 24 pages of color pictures, which look great. What spoils the graphics is the huge variation in the reproduction quality of the b/w photos. Far too many have a washed-out, faded look to them. The scanning and printing of original document pages is particularly bad—most are indecipherable studies in shades of gray. All this is just another indication of the fact that the book publishing industry and computers have a long way to go before they can be regarded as compatible.

For all his lifetime of tinkering with engines and other devices, it appears that Redrup never produced a motor or a device that could be classified as a winner. Undoubtedly, he was someone who kept on trying and an eternal optimist. His story is interesting and we are indebted to Professor Fariney for bringing it to us.

The Knife and Fork Man

The Life and Work of Charles Benjamin Redrup

Posted Under: Biography/ Autobiography, Technology | Author: Other | No comments yet