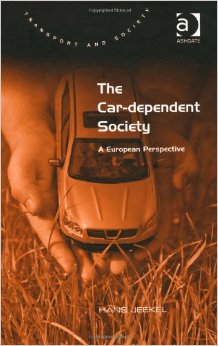 “People in our time use cars frequently. One can ask whether this is always a free choice. For a whole category of activities modern Western man seems to be dependent on the car. This form of dependence is, in contrast to others, which are often defined as addiction, seen as normal.”

A key premise in this academic text is that “the distance traveled per car is diminishing in Western Europe while the number of cars per households is rising.” This is an unintuitive phenomenon, leading to the inevitable question: “What are all the cars used for?”

American readers should not dismiss this as a European issue. While the cliché is that Americans drive “everywhere,” the annual European mileage of 7,677/13,500 km is proportionately (i.e. taking into account the vastly larger US distances) not much different from the 12,334 miles in the US.

What does remove the book at least a bit from an American frame of reference is that the author (a cum laude urban planner by training, then consultant and politician and presently Director of the Dutch National Road and Water Agency) approaches the subject from a social science angle, which, by definition, cannot be universal but is culture-specific. If concepts such as risk society, peri-urbanisation, task combiner or transnational place-poligamy are not in your everyday cocktail-party vocabulary, you’ll have to exercise the grey matter a bit to get into the swing of things. To make it less abstract: if you are the sort of person who drives the 100 ft to your neighbor’s house (let’s just be optimistic for a moment and assume you actually commune with your neighbor . . .), you are probably using your car without thinking about alternatives. Why? Because you’re hooked, an addict, dependent on your car for your every—hah!—move.

Dependence is the end state of the process of habituation that goes from casual use to frequent use to reliance on and, ultimately, dependence on the drug of choice: coffee, cocaine, car. The user no longer sees or seeks alternatives; partly, as Jeekel sees it, because “cars are becoming individualized consumption articles” thanks to western society not attaching a stigma to unthinking car use—damn the torpedoes i.e., global warming and the whole litany of transgressions man inflicts upon the planet, the only one he’s got.

Now, the job this book, this author undertake is not to pontificate but to define, describe, analyze an issue and to project outcomes. Sure the author has a possible solution: change the “societal story.” This means addressing the reasons that make people reflexively, unthinkingly reach for the car keys as the tool of choice. It’s obvious enough to see car ownership and use in terms of our much-valued desire for independence, flexibility, even self-realization and work on changing that. It’s not nearly as obvious to accept that the data show that parents have an undeniable, quantifiable fear of letting their children venture out into the world unescorted (by a parent, in a car). Enormous amounts of data from the 13 countries that constitute Western Europe have been churned to pin down such stirrings and there is much to be discovered here that one simply never thinks about unless one is conversant in such matters.

The book concentrates on five specific questions about forces in society that require or invite the use of a car. As a proper academic text should, it meticulously defines its terms and methods, lists its sources, takes the reader into the discovery, and challenges you to compare your own conclusions to the ones it offers. It’s work, to be sure but—no pain, no gain!

Among the possible answers to the Five Questions is one that Europeans have much less resistance towards: more government action—shudder. But, the reality is, sadly, that when individuals can’t be bothered to act, the officials that have been elected to look out for the common good, the greater good, will fill that vacuum, as indeed they must. So, read the book, think, act.