The Bombing of Rolls-Royce at Derby  in Two World Wars 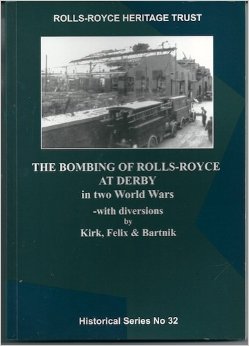 Although not directly aircraft engine related, as its subtitle “With Diversions” implies, the story manages to wrap enough aircraft material into the text to make it worthwhile reading.

The concept of the book is to use various bombing raids on the Rolls-Royce manufacturing facility in Derby, England to describe the offensive and defensive equipment used. In this way, the reader can get a better understanding of the Zeppelins used to bombard England during World War I. Using the bombing of the Derby area as a backdrop, the authors went into great detail into the history of the Zeppelin, its development, the Maybach engines that powered them, etc. Of course, the British would not and could not take this assault on their homeland unopposed so the book delves into the British fighters of the day. It could be argued the authors were diverging off the subject and this is either implied or admitted to in the text.

Most of the book was devoted to a bombing raid by a Dornier Do217 twin-engined medium bomber that dropped its bombs on the Rolls-Royce Derby factory in 1942. Nice anecdotes are offered into the strategy of barrage balloons and how effective or otherwise they were. A nice description of the BMW 801 radial engine that powered the Do217 is offered. However, this reviewer would like to make some comments regarding this engine. Although this myth has been perpetuated many times, the 801 was not based on a Pratt & Whitney design even though BMW built P&W R-1690s under license. The authors do a comparison of the 801 with some of its contemporaries such as the Merlin, Wright R-1820, Hercules, etc. But the one engine that bore the most resemblance to the 801 was omitted. That engine was the Wright R-2600. I make mention of this because in this reviewer’s opinion, the 801 was copied from the R-2600. Several facts support this: (i) they are the same configuration, i.e, 14-cylinder, two-row air-cooled radials, (ii) they are of almost identical displacement, (iii) their conceptual design is identical, i.e, three-piece crank, one-piece master rods running in plan bearings and the crank is supported in rolling element bearings, but most telling of all is (iv) their crankcase design. Wright developed an unusual way to make their radial engine crankcases in the late 1930s, that of using forged steel. The 801 also used this unusual manufacturing method. Lastly, Wright’s top design engineer was a German who still maintained contact with his German friends. Would it be a stretch to assume that he let the cat out of the bag regarding the forged steel crankcase? Incidentally, the forged steel process was not as heavy as one would think. Wright crankcases, and presumably the BMW 801, used extraordinarily thin sections where the stresses were low. So overall, it weighed no more than a forged aluminum crankcase.

Excellent insight is offered into the defensive measures taken by the Germans to protect their aircraft against cables from barrage balloons. Hard to imagine, but the Do217 that attacked Derby actually ran into a cable and lived to tell about it.

A couple of relatively minor errors:

This is a very specialized book and one catering to decidedly British interests. But, as all RRHT books, it represents an absolute bargain. This reviewer buys every RRHT Historical Series (of this is vol. 32) as a matter of course as soon as it becomes available. You pay more for some magazines than you would for this book! (And just wait a few years to see what prices these books command on the secondary market!)

USRRC: A Record of the United States Road Racing Championship, 1963–1968 »
« The Best of Ernie Bushmiller’s Nancy