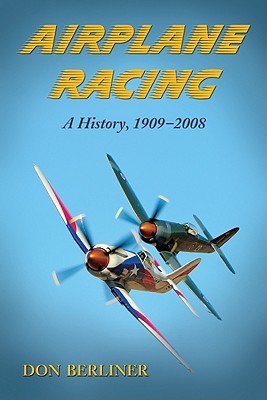 Author Don Berliner, who has been writing books and magazine articles about airplane racing for five decades, has given us a data-packed 260 pages describing more than 187 separate air racing events worldwide. For the time period between 1909 (the world’s first air race in Reims, France) and 2008 he lists who won each event, what they flew, and what engine twisted the prop. In addition he works in bits of color concerning the personalities of the people involved, interesting design successes and failures, along with where he feels the dynamic technical sport of aircraft racing is headed in the future.

The coverage makes you want more of everything, particularly photos. Even without adding any text, the book could easily be twice as long if pictures of all the airplanes mentioned in the text were displayed. The cost of the book, of course, would probably also double! I’m thankful for the 112 pictures of airplanes that are shown but was hungry for more. Examples of many interesting airframe designs mentioned but not shown were famous designer Burt Rutan’s 1981 racing sport biplane, and his 1991 twin boom Pond Racer with two 1,000-hp engines. Unfortunately, both crashed and destroyed themselves.

It would have also been informative to see such exotica as the Bugatti racing airplanes from 1938 and 1939, powered by one and two 3.2-liter Bugatti Type 50 engines, along with Payen Flechair’s 1939 delta-wing race plane, and many other designs that leapt into the air but failed over the years. Obviously one could find such photos elsewhere, but ideally they would be right here where the text talks about them. My interest was piqued by the author’s knowledgeable descriptions and insight into what made unusual designs work or fail aerodynamically. Like all competitive technical sports, air racing rewards the winners and drives the losers to experiment with “improvements” to both engines and airframes until they eventually become the winners. This cycle repeats itself endlessly in the pell-mell struggle to get there first.

The uniform format of who-won-what-when makes for straightforward reading given the limited space (232 pages of text) to list the winners and speeds of more than 187 separate air races spanning a 99-year time period. Where possible, Berliner includes quick thumbnail sketches of the people involved and the current events as they related to the racing. An excellent job, considering the editorial space restrictions required to keep the book affordable and informative. Another plus is the listing of worldwide museum locations where surviving racing airplanes are currently on display.

Berliner is the editor of Golden Pylons, the newsletter of the Society of Air Racing Historians and has officiated at air races in several countries. One gets the impression that he definitely has the knowledge to produce a huge 1,000-page coffee table book full of pictures and detailed descriptions covering everything about everyone involved in air racing IF sufficient funds existed to underwrite such a publication. Unlimited funds don’t exist, so let us be thankful for what McFarland has done to publish what it has. Not exactly riddled with typos, there are still enough mistakes to bring on a smile/smirk, particularly on page 165 where the 1st place speed is listed at 202.17, followed by 2nd at 201.64, 3rd at 1912.56 and 4th at an even 19135 mph.

The book is divided into four main sections: Before World War I, Between the Wars, Post–World War II, and the Reno Air Races Era. A Preface and Introduction begin the book, with a Summary and Outlook, Chapter Notes, Bibliography, and Index closing things out.

Posted Under: Aviation, Civilian | Author: Bill Ingalls | No comments yet