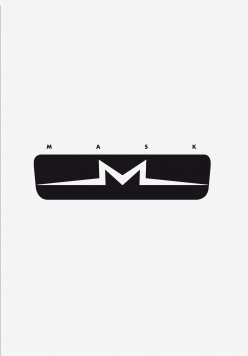 Ah, to be a fly on the wall when books like this are put together. Once again, a book without words, all 6 x 8 inches of it, proves the hardest to review.

This book presents 165 disembodied grilles of American cars of the 1950s and ‘60s, one to a page, b/w on white paper, facing a blank page, and printed in an almost rasterized, newspaper-print resolution.

Except for photo “captions” stating a year and, sometimes, a model or make of car, there are no words in this book, nothing to go by, not even an introduction—but that’s just the point: to an artist, explaining his work is anathema, and Rigolini is nothing if not an artist.

Art, moreover, requires the viewer/reader to supply his own reaction, otherwise it’s a tree falling/or not in the forest. The book title is obviously not random. Is it a clue? a provocation? Cars have faces, ok, heard that before. But masks hide something. Is the era of cars specific to the artist’s intentions? Is it relevant he named names? If there were mistakes in the legends, would it matter? 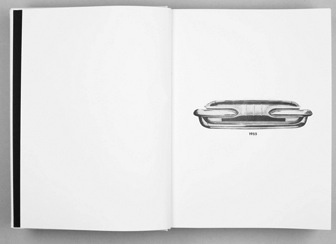 Certainly, cars of that period, especially American cars, are recognized for their sculptural, highly designed and highly intentional brightwork and also overall design (size/scale, futuristic cues, even colors) that is very specific to time and place and emotion. 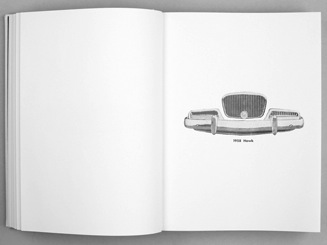 Rigolini (b. 1950), a Swiss photographer, has circled the wagons for years, collecting images of objects of all sorts—made and found—but stripped of human presence or even the context of other objects. His Urban Landscapes photo collection in the 1990s attracted international attention, a period in which he also explored artistic documentary films as a producer for the European cultural television channel ARTE in Paris. “Perception”—its dynamics, limits, consequences, metaphors—are, if that is the word, Rigolini’s theme. See X1 and X2 [2006], Natura Morta [2007], Untitled [2008], What You See [2008]. 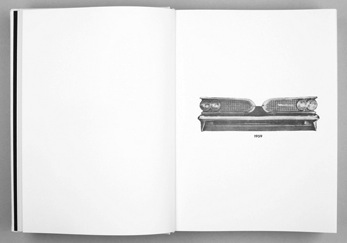 So, no answers here. You have to fill the blanks on your own. And you’ll probably make different associations each time you open the book, in which case Rigolini will feel he done right.