Malta Spitfire Vs – 1942: Their Colours and Markings 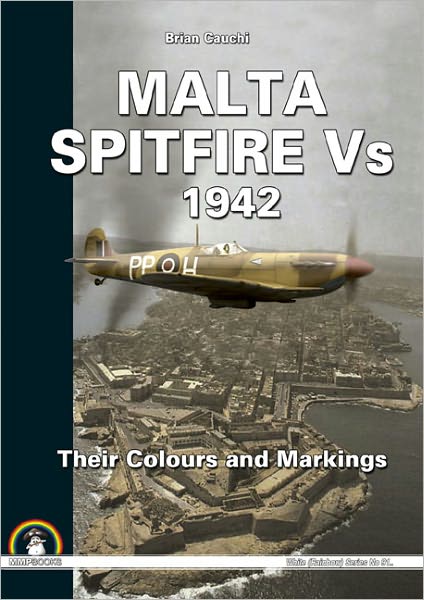 “It was never my intention to write a book about this subject, or any other subject for that matter, and it was only the way a number of particular events unfolded that resulted in this published work.”

You may not realize it but the precise colors and markings on Spitfires deployed to Malta actually is a really hot topic. Well, in certain circles.

Look at a map and you’ll see that Malta is an island. Islands have a habit of being surrounded by water. Water, or rather the sky reflected in it, is blue. Many of the Maltese Spits arrived in a desert livery of Dark Earth and Middle Stone. So, were they overpainted? And to what? And what does it matter anyway? Since painting a warplane is not about art but camouflage there must be bureaucratic processes applicable here. There must be guidelines, charts, numbers, acronyms, uniformity, purpose. So why do the surviving black and white photos show such bewildering variety? What happened to the TSS (“Temperate Sea Scheme” to me and you)?

Spitfires are plenty interesting, the battle for this strategically important spot in the Mediterranean in the context of the war in Africa is plenty interesting (you can’t really watch Casablanca without giving a thought to Malta), but even if none of those factors ring your bell, the book is also interesting simply as an intellectual exercise, a case study in framing a problem and in forensic photo analysis. In fact, it is the latter group that will get the most out of this book—because author Cauchi, after taking 14 years of shaking every tree and fielding many learned hypotheses, concludes that all, or much anyway, is grey, not literally but metaphorically. Modelers who read this book with paintbrush/gun in hand, will end up, to coin a phrase, watching paint dry. Not because the book is boring, far from it, but because it’s . . . complicated. Still, Cauchi’s process is presented in an eminently impressive and really engaging way. He is of course very well known in scratch-built modeling circles, especially the larger scales, and probably the most capable investigator to ferret out this particular subject. The book is also very cleverly designed so in that regard too it is interesting.

Cauchi examines piles of photos, analyzes reams of interviews (many excerpted here), scrapes paint off of surviving aircraft parts, and runs it all through the mill of his knowledge of context and minutia. The reader gets to look over his shoulder as Cauchi weighs it all and forms opinions.

This particular book is in the publisher’s White Series, which, although written with the modeler in mind, is far more context and background rich than MMP’s other series. It uses, for instance, fewer color profiles, tech drawings, and detail illustrations of nuts and bolts. Instead there is much more emphasis on descriptions of operational and logistical matters and field operations. Lots of Appendices too, from all sorts of numbers to delivery listings and pilots’ profiles. The color profiles are placed, by the way, right where they relate to the text or to actual photos of the airframe in question. This not at all common practice is much more useful than the dreadfully unimaginative way of bundling them all at the back of a book.

There is a lot to think about here and the journey is more interesting than the destination.

Malta Spitfire Vs – 1942: Their Colours and Markings

War and Remembrance »
« Thunder at Sunrise