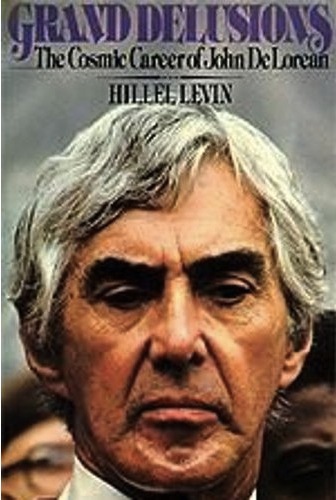 Look upon this face and somehow your mind turns to ancient coins with the likenesses of caesars upon them. Not so far off the mark….

We have here a mélange of As The World Turns, Dallas, Horatio Alger, Lord Jim, Wall Street, Tucker: The Man and His Dream and Scarface. The last of these, of course, is an exaggeration, but the book, near the end, offers a shackled and cuffed John DeLorean who surely regrets the police video where he, holding a 100-kilo package of cocaine (a cool sixteen million dollars’ worth), avers, “This is as good as gold.” To be fair, as Levin points out, this had been an FBI sting operation, and there is no evidence that DeLorean had any other connections with drugs—either using or dealing. This incident, however, caps a story of a prideful and egotistical—sometimes wise, sometimes foolish—man whose dream came so very close to realization, a dream that, if realized, would have been a singular accomplishment indeed.

To have gotten as close as he did to sustaining the car company he—almost single-handedly—created was a prodigious feat, especially considering the gas crunch of the 1970s, the safety regulations of the era and the fact that Detroit’s Big Three still exerted considerable power and influence. The factory, in Northern Ireland, was up and running and approximately 9000 examples of the sleek, stainless-steel-skinned, gull-winged DMC-12s were produced. Grand Delusions describes in detail how this came about. The book explores DeLorean’s rise from his Detroit blue-collar background, his lauded tenure at General Motors, his significant contributions in the development of the popularity of muscle cars, his warped idealism, and his attainment of notoriety and wealth. In DeLorean’s case, it seemed that every deal he made, in both small and large ways, killed his idealism, and the man’s dark side is significantly documented: the greed, the betrayals, the questionable business practices, the unsavory partnerships and the outsized ego.

Levin, who has done investigative reporting for The Nation, New York, Monthly Detroit and Playboy, builds a strong and engaging story. Although it is obvious that the book is well researched—there is an eight-page index—it reads like a novel. Levin is a fine wordsmith, and his delineation of the various characters involved in both DeLorean’s personal life and business affairs are polished and grounded. And even if one knows the final outcome, Levin manages to sustain the reader’s anticipation and suspense.

If an automotive enthusiast is interested in learning about the car rather than the man behind it, this is not the book to choose; but this is in no way a criticism. Grand Delusions is an insightful documentation of the reality behind DeLorean’s legend, and certainly this legend will endure for a long while.

Posted Under: Automobiles, Biography/ Autobiography, US | Author: Bill Wolf | No comments yet