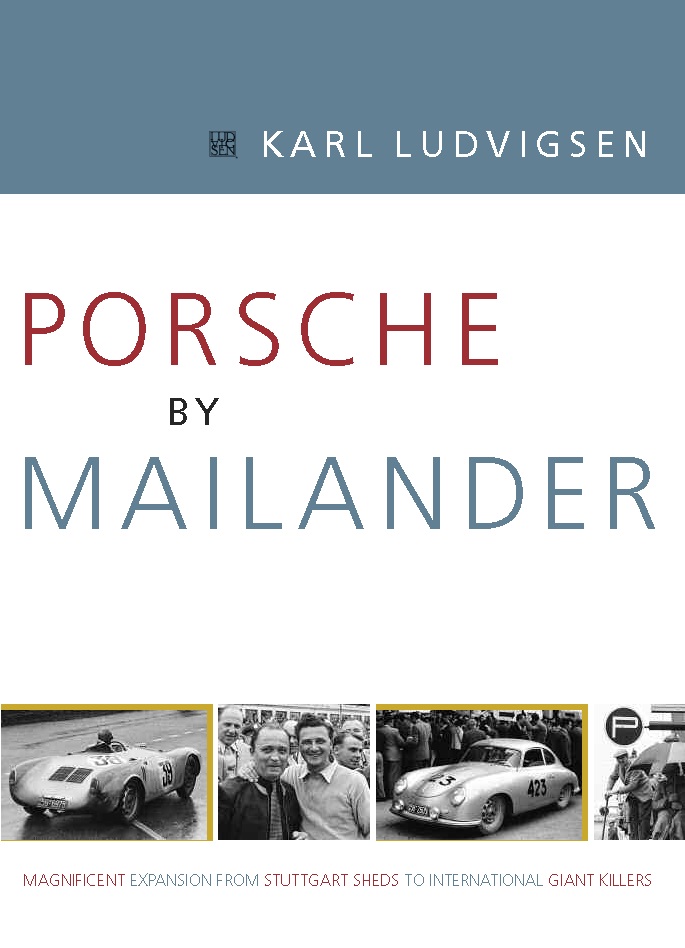 “It [the 356] was a magnificent machine—elegant, powerful and with one significant advantage: if you took a girl out for a ride her mother couldn’t ask for a lift!”

Anyone with an interest in photography, and, of course, Porsche 356 race and road cars (especially 550 sports-racing Spyders) will find the many previously unpublished photos in this book irresistible.

Covering a mere six years, 1950 through 1955, Mailanders’s lens captures a car company that is just beginning to carve its place into automotive history. Passionately interested in cars, he himself recognized Porsche qualities early on (as did fellow shutterbug Jesse Alexander) and owned a 356 cabriolet and then a coupé in 1954. From races, motor shows and car launches to people and places, he presents a portrait of an era in general and a portrait of a company that would come to embody lasting engineering excellence.

Born in Italy (“Mailander” means “from Milan”) to parents of German origin, Rodolfo developed a knack for being at ease in different places, different languages, and among different people—skills that come in handy for any photojournalist and opened doors.  Today he ranks among the great motorsports photographers of his time.

From Ludvigsen’s pen have flowed some of the great benchmark Porsche books known to man, along with many others on a wide variety of historical and technical subjects, and between his learned commentary and Mailander’s photos we have here one of those books that can be confidently pronounced essential. Price be damned. Add to that the typical upper-crust Dalton Watson way of bookmaking and the $150 cost of admission seems positively reasonable.

This Porsche book is conceptually a companion to the 2005 Ferrari by Mailander book, same author, publisher, and excellence. If you have that book, and if you have superhuman memory, you may read the first paragraph in this new one and wonder if you picked up the older one: they are exactly identical, as is much of the rest of the Foreword. This is more a “if it ain’t broke, don’t fix it” situation than a deficiency. In it, Ludvigsen relates his long relationship and manifold personal and professional connections with Mailander which began in 1958 when Mailander was a PR man for Daimler-Benz. This could beg the question when there will be a Mercedes by Mailander book. If there is, it won’t be by Ludvigsen because in March 2011 he sold large parts of his automotive archive, including over 250,000 images by various photographers (Mailander, LeGrand, Eves, Dugdale, Rosenthal, Nielsen), to the Collier Collection Library which is managed by the Revs Institute, an automotive research facility. (Readers with aeronautical interests can relax: Ludvigsen will now devote himself to work in those fields, after wrapping up several automotive books.)

Between its 7.3-lb weight and 13.6˝ height you won’t be using this substantial tome for twirling practice. Such a large footprint is ideal for large photos. Captured on 35 mm film they are impressively well reproduced. That the negatives exist at all, properly preserved and cataloged, is in no small measure thanks to people like Ludvigsen who take on custody of such collections, not just to squirrel them away in a vault but to make them accessible to ordinary mortals. Mailander, who gave input into the Ferrari book, died in 2008, at age 85, and couldn’t do the same for this one. A preface of sorts is under his name; it too is largely similar to the one in the Ferrari book but customized to highlight the Porsche aspect.

Each decade is covered in its own chapter. Every race (from big-time Le Mans, Mille Miglia, Monte to many smaller ones), every car (including specials), and every driver is discussed, always in the context of overall progress at Porsche. A good deal of the information is new to the record or expanded so even the well-read Porsche enthusiast will make discoveries here.

Even if—perish the thought—you have no interest in Porsches, the breadth of the photos and the quality of the research and writing are extraordinarily appealing. Decent Index. A German-language edition is available from Delius Klasing (Porsche pur, Die legendären Fotos von Rodolfo Mailander. ISBN 978-3-7688-3311-0).

People learn by observing. It in no way diminishes the importance of the book to draw the design-minded reader’s eye to the chapter openers and the (ok, we’ll say it, unimaginative) use of the same alternating detail of the Porsche badge.