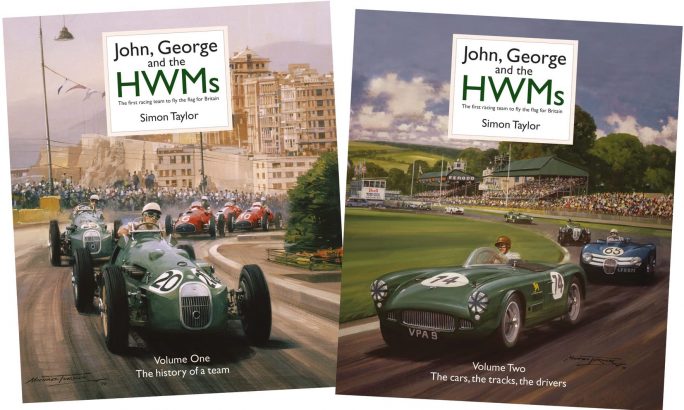 “But HWM were there at the beginning. John and George would probably find today’s super-professional motor ‘sport’ totally bewildering, but there is no doubt that they and their little team played a key role in laying the first few stones in the foundations of the elaborate edifice that is motor racing as we know it in the 21st century.”

For anyone outside the UK, the main title may not ring a bell and the subtitle may lead to undue expectations. Add the words “after 1946” and things would be a bit clearer. Even Taylor laments, “Far too many people, even if they count themselves as racing enthusiasts, have never heard of HWM, and have no idea that for a few short seasons it was Great Britain’s most important representative—and sometimes its only one—in European races.”

Those few short seasons are actually a respectable 11 years. Depending on how you count, only 19 chassis were ever built (of which 17 still exist) so on the one hand this should be a rather compact story to tell. On the other . . . well, that’s the whole point of throwing a 520-page book at the question. 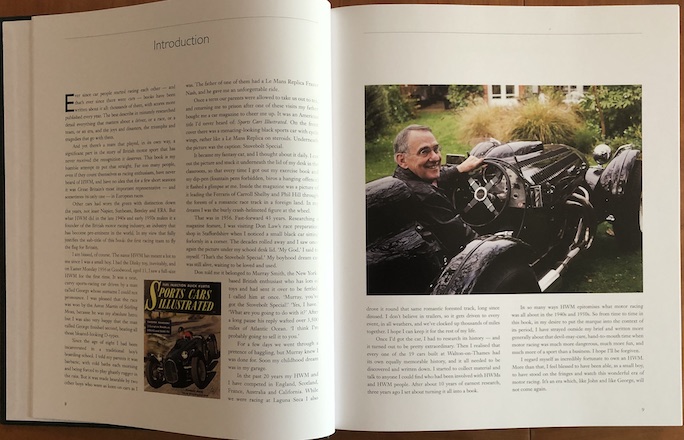 Taylor in his Stovebolt Special. Totally road legal, he drives it to races.

John (Heath) and George (Abecassis) may not ring a bell but Taylor surely must: for five decades he left tracks as a journalist, commentator, publisher and historian, and famously ended his career as the chairman of the publishing group (Haymarket Magazines) where he had once started fresh out of university as a writer on a weekly rag. Or you may know him from radio and TV—or, and now we’re really getting into the meat of this book, as the owner of the Stovebolt Special. He had clapped his eyes on a photo of that famous HWM as a schoolboy—“It became my fantasy car and I thought about it daily”—and it took him only 43 years to put it into his own garage. Books by people like that are really the best kind: total commitment to the cause, an untouchably deep and wide frame of reference from his secular work, a grasp of every word ever uttered on the subject by anyone, and skin in the game as an owner. He sunk ten years of research into this project and another three writing. That the book is racking up awards (cf. the Guild of Motoring Writers 2019 Mercedes-Benz Award for the Montagu of Beaulieu Trophy; Royal Automobile Club’s Specialist Motoring Book of the Year) is the least of its successes. 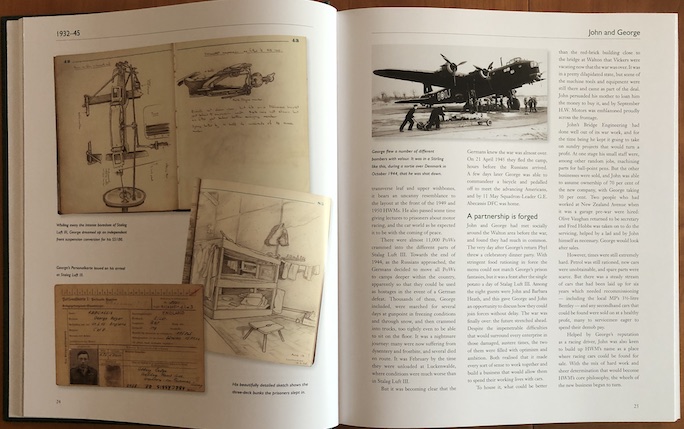 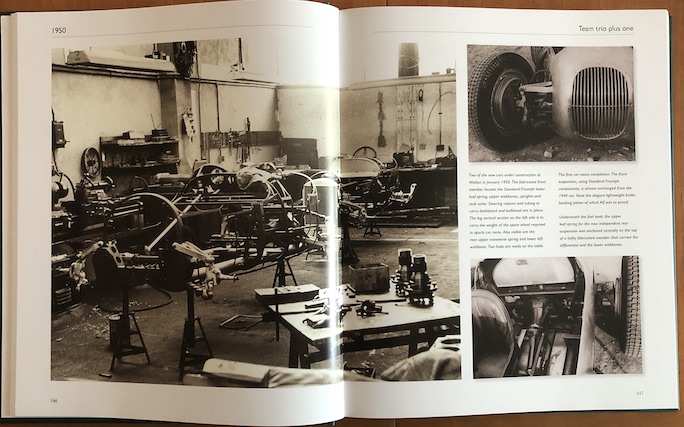 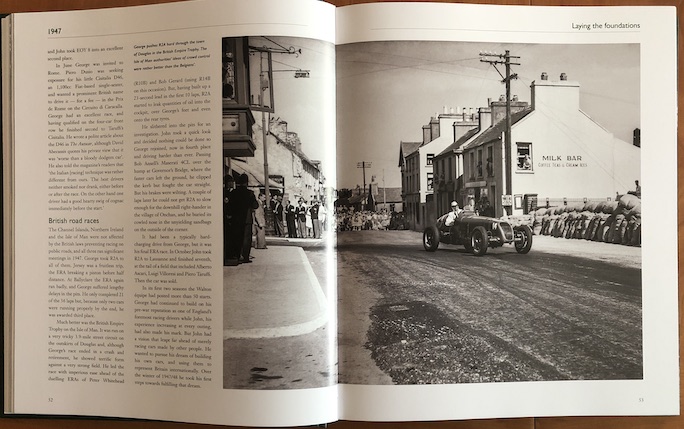 Heretofore one would have had to turn to the biography A Passion for Speed (2010) by George Edgar Abecassis’ son David or, a bit farther afield, Doug Nye’s Powered by Jaguar: The Cooper, HWM, Tojeiro and Lister Sports-Racing Cars (1980). Taylor’s adds context to especially the former and offers many points of contact to just about anyone interested in this era of motorsports. People, places, cars, technology all have wider application than merely HWM (there’s even something you’re not going to see in most Lagonda books: a Lagonda flame thrower!) There are also circuit diagrams lifted from period race programs in the Richard Coe collection and, not to forget, the two lovely cover illustrations by Michael Turner, “Britain’s leading motor racing painter.” 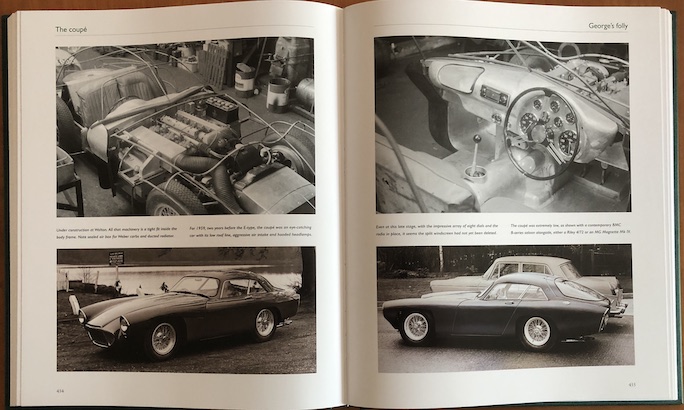 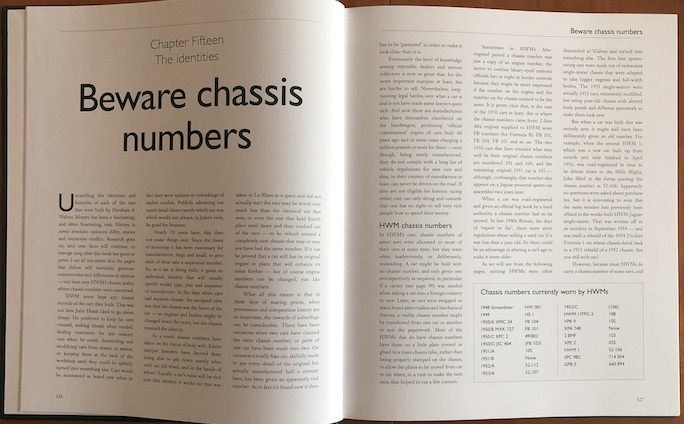 The subject matter and also the $200 price mean this is a book for someone with fairly specific needs/reasons to own it. That sort of person will want to be given a look under the hood: the 2 volumes are consecutively paginated, which usually means there is one Index for both, at the back of the last volume. Here each has one, but only for that volume. There is no merit in debating the pros and cons of this approach; there is no one-size-fits-all answer. In this case it sorta/kinda works (meaning it is at worst an inconvenience) because each volume has a different core topic: Vol. 1 (ch. 1–14, 320 pages) covers the origin story and 1946–56/57 in year order, and Vol. 2 (ch. 15–29, 204 pages) covers stand-alone auxiliary topics dealing with chassis numbers (“inadvertently or deliberately misleading”—they were never stamped onto the chassis would be common practice), quite detailed chassis and owner histories, a look at other marques HWM retailed or supplied parts to, race tracks, race drivers, and race results. The folks who run this publishing house know proper bookmaking better than most, and they are not given to skimping just to save a penny so they must have duly considered their indexing options. Speaking of which, bibliophiles will note with appreciation that the books have properly rounded spines, definitely something that adds a production step and thus cost—but is so, so important to prolonging the life of a binding. Also, paper quality and photo reproduction are top shelf, and the design—and this is meant as compliment for it is harder to do well—is of the less is more variety. Photo captions are as thorough as the main text and often include dates and locations. Reading the Acknowledgments is a reminder both of how small the community of serious folk is and also how collaborative it is (if the right people ask) for the greater good of all. 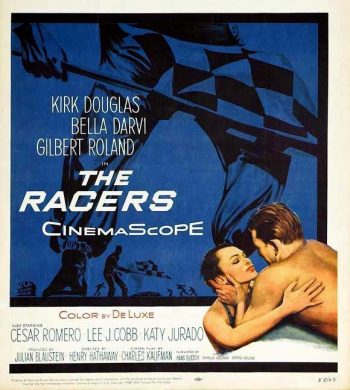 Incidentally, family-run HWM (Hersham & Walton Motors, derived from the street addresses of George Heath’s original locations) Sports Cars is still in business, as a sales and service operation and they are actually the oldest Aston Martin dealership in the world (“We now sell the cars we used to race against.” How clever is that!). And if you’ve never seen or heard an HWM in motion, watch chassis 49/002—out of which Taylor’s Stovebolt Special would be built after the crash—in the 1955 movie The Racers (based on the Hans Ruesch book about Rudolf Caracciola).

John, George and the HWMs: The First Racing Team to Fly the Flag for Britain