1994: The Untold Story of a Tragic and Controversial F1 Season 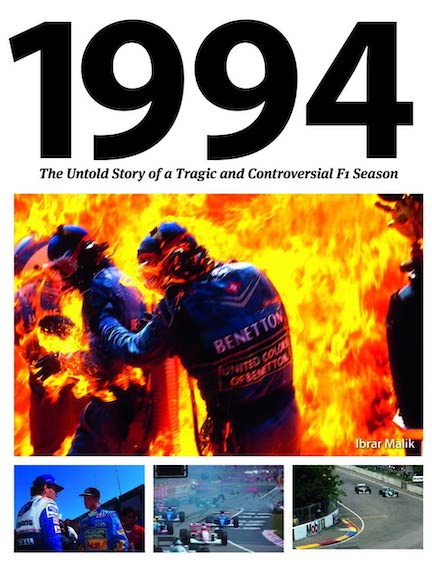 Coming across this book was for me one of those serendipitous sorts of things one experiences when standing in line at the supermarket next to the candy rack. Normally, it would be quite safe to suggest that it would be rather unlikely, make that highly unlikely that I would even give it a glance, much less a second glance. But, while ordering a copy of the Richie Ginther book, my eye fell on 1994 so I added it to the cart.

To anyone familiar with the motorsports timeline, 1994 stands out as a big year. It was the season during which refueling was reintroduced to F1 racing, thanks to Ferrari, with a rather dramatic pit fire in the Benetton pit at the German Grand Prix (captured in that dramatic cover photo);  new regulations for 1994 banned traction control, ABS, power braking systems, fly-by-wire throttle systems, and active suspension; Ayrton Senna da Silva was killed at Imola in May, the same weekend that Roland Ratzenberger also died; Karl Wendlinger was critically injured at Monte Carlo; Benetton was accused of using illegal electronics; a number of changes to the regulations were introduced during the season due to safety concerns; Michael Schumacher was disqualified from two races (both were victories) and banned then from another two after winning six of the first seven events of the season; and, then managed to collide with Damon Hill in the season finale.

Malik, a Brit with a background in surveying and property management, is a self-described Formula 1 fan (also wrote Untold Stories From F1 During the 1990’s and Team Lotus: Beyond the Colin Chapman Era) and, to his great credit, found a topic that interested him, researched it, wrote something up on his findings, and then managed to get it published. That 1994 was the first year that he followed F1 played a role in why and how he decided to write the book. Two decades after the 1994 season, in 2015, Malik made the decision to look into the season and try to sort out the various controversies that the season had in abundance, then provide his analysis and conclusions regarding the season.

Malik digs and digs and digs and discusses and discusses and discusses and ponders and reflects and thinks about it, and then thinks about it some more and looks at this and also looks at that and ponders what this person said and then what that person said before he finally suggests, after some more reflection, just what he might make of that level-one craziness that marked the 1994 season. Did  Benetton use possibly illegal electronics? Did others? Did FIA officials possibly botch a series of decisions regarding Schumacher and Benetton during the season (while letting others escape unpenalized)? And how did the 1994 season affect the way in which many subsequently viewed both Schumacher and Benetton?

Yes, there are moments when one might become more than a tad exasperated with Malik who seems at times to want the book to read almost as a true crime exposé. But when the hemming and hawing finally ends, he does suggest something that makes sense and is worth considering.

I was rather pleased and greatly delighted that Malik actually had footnotes (yes, actual footnotes!!!) in the book, not to mention a decent bibliography. For that reason alone I was quite willing to let him meander around a bit in his discussions.

After reading 1994 and then thinking about it a bit, I pulled that season’s edition of Autocourse off the shelf to read through it. It seems Malik consulted the 1989 and not the 1994 edition, as well as that year’s issues of Autosport—both for probably the first time in many years, to get a better feel for how the season was viewed at the time by those experiencing it as a contemporary event, within its zeitgeist in other words. While Malik has the advantage of the passage of time—several decades, in fact—these impressions provide a better perspective and context and also remind one just how much of an impact the 1994 season had on shaping our long-term assessment of Michael Schumacher and Benetton.

While both Senna and Schumacher were certainly drivers with incredible abilities on the track— Malik points out, for instance, how having only fifth gear (and managing to somehow not stall during refueling stops) Schumacher was still able to finish second in the 1994 Spanish Grand Prix—both were prone at times to what can only be described as very poor judgement. Senna at the 1990 Japanese GP and Schumacher at Adelaide in 1994 and then again at Jerez in 1997 deliberately forced rivals off the track. For that and other reasons, I was among the few who cared very little for either one of them.* In their own ways, both made it easy for my interest to drift away, far away, from contemporary Formula 1.

While certainly not much of a Formula 1 fan or enthusiast, I, the grumpy old historian, find that Malik’s 1994 was well worth the time it took for me to work through it. It did pose some interesting questions and then suggested possible ways to interpret all the research he had assembled. Yes, it was a bit awkward and a tad baffling to read at times, but I am hardly someone to point fingers when it comes to that. It was nice to see someone tackle a meaty topic and then have to wrestle with it. It provides a perspective of the 1994 season that was actually thought-provoking. Not at all what I anticipated, so full credit to Malik for being brave and persistent and letting us look over his shoulder as he forms his own opinions. And, long live footnotes!

1994: The Untold Story of a Tragic and Controversial F1 Season

Posted Under: Automobiles | Author: Donald Capps | No comments yet