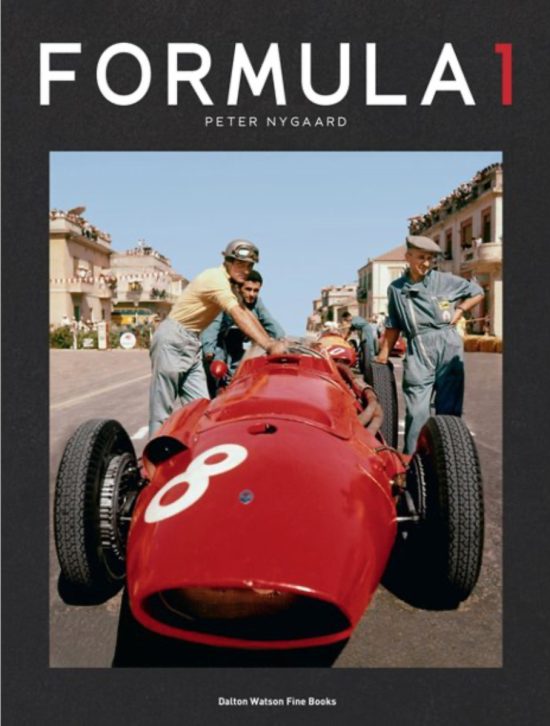 “I have now covered over 600 Grands Prix, interviewed all the stars from Juan Manuel Fangio and Jackie Stewart to Ayrton Senna and Michael Schumacher, and still find life in Formula 1 exciting and fulfilling. I have spent my entire working life in Formula 1, and I wouldn’t have done it any other way. I still look forward to the next Grand Prix with anticipation and excitement.”

If, unlike the author, your eyes glaze over at the prospect of yet another Grand Prix or book about Grands Prix, pause for a moment:

The first two numbers can’t go with the third one, can they? How can a book this big cost so little?? It’s a good book, too, not some piece of fluff cobbled together to make hay. 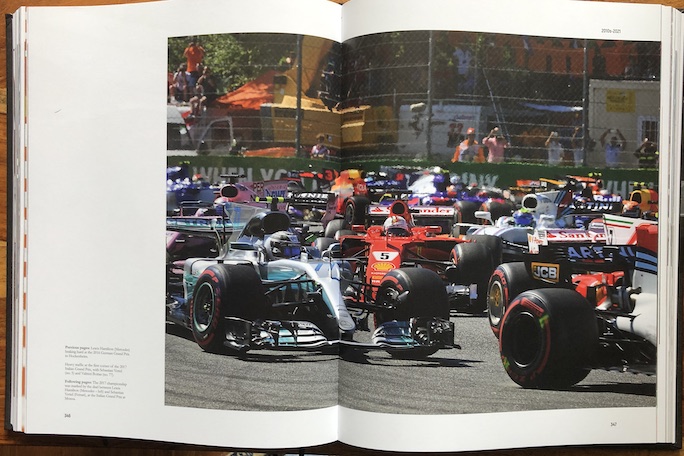 So you think: Big deal, a gaggle of cars, all bunched up—I could take that photo! But could you? How, for instance, would you dial in your camera settings to capture the heat? What heat? While still keeping the helmet logo of the Ferrari driver in focus? And let’s not even talk about the lettering on the moving tires. So, look closer, young whippersnapper, and consider the error of your ways. The image as used here is too small to see any of this [p. 346/47] so below is a close-up: 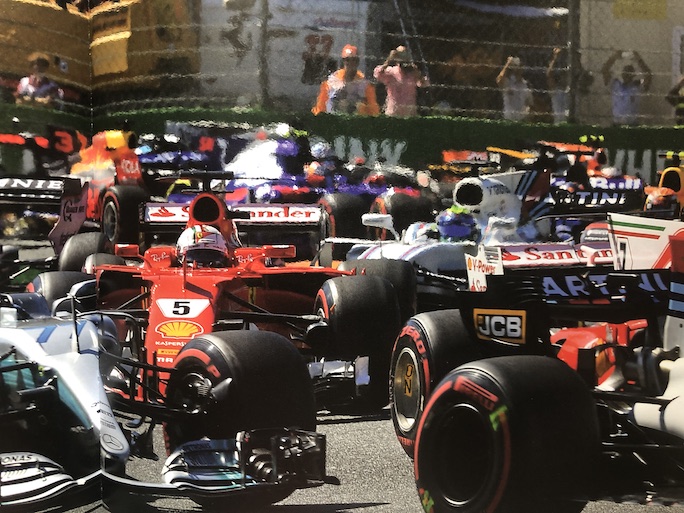 Look at the no. 5 car. The Santander logo on the rear wing is already less sharp than the driver’s helmet below it. Move your eyeballs higher still and up to the green fence—everything is getting more and more shrouded in the haze of engine heat. Nothing about the technical aspects of this photo is simple! 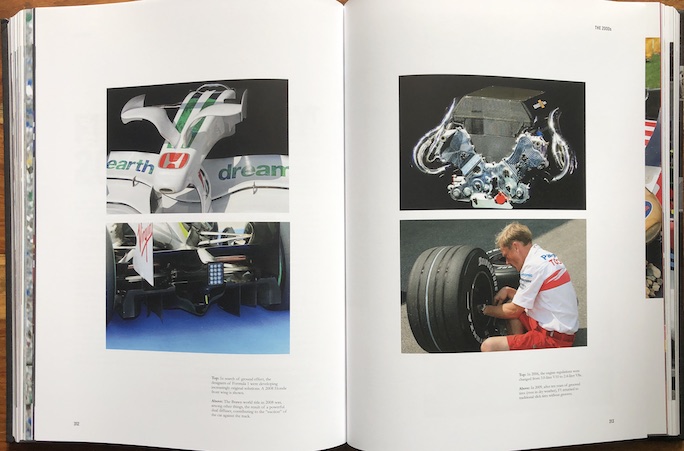 “Good” here means several things. It’s a photo book, and many of its images have not been seen in print before—how exciting is that!? Then, it’s a photo book with really precise and thorough captions—one would think that’s par for the course, but one would be wrong. And it contains the sort of sweeping summary-style narrative that knows just when to switch to a different lens and zero in on detail that is on the one hand small but on the other emblematic of a bigger story—the sort of thing only someone fully versed in his field can dispense with such seeming ease. (A totally random example: “War is seldom fair play, and Hamilton mercilessly exploited Rosberg’s innate kindness.” The nuances in this statement require more than an ability to regurgitate facts and stats.) 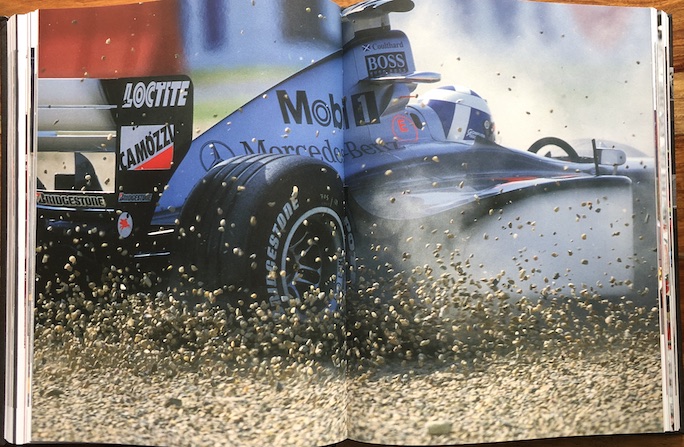 The gravel looks so three-dimensional you’ll be ducking as it’s practically flying off the page!

There are plenty of folk who are pro photographers but do not have the expert-level historical knowledge of the subject that Nygaard brings to the table. An additional asset is that the photo archive he started back in the day to support his writing (Grand Prix Photo) grew to include the archives of several important photographers and nowadays counts as one of Europe’s largest.

So far so good.

But, we wouldn’t do our readers a service if we left it at that. The book’s coverage begins in 1950; Nygaard wasn’t even born then and didn’t make photography his professional career until 1987 so those early photos are obviously not his. But whose are they?? Wouldn’t one think that a book that’s all about the photos would say that? Moreover, even the photos that could be his (time-wise) are not so identified. It doesn’t diminish the impact of the book, it just presents an obstacle to researchers, collectors etc. 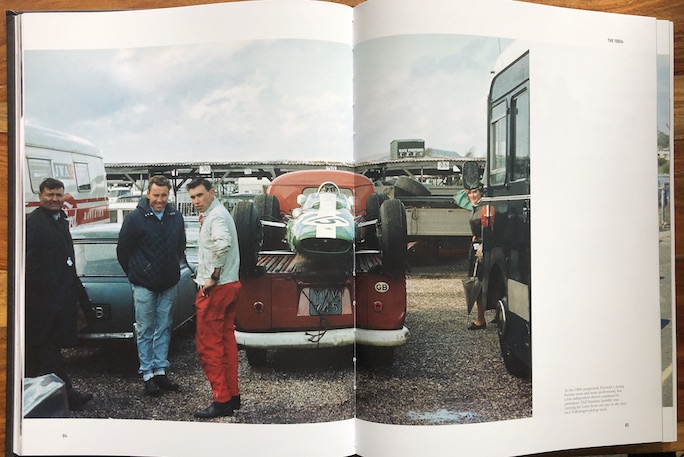 Guy stepping into frame with smudges on face, a race car [Lotus] strapped to a VW barely big enough to hold it, woman with umbrella probably wondering if it’s ok to walk on. The circle of life. But who took the photo, eh? Or when and where? All we’re told is that the man in the center of the group is privateer driver Paul Hawkins, and that it’s the 1960s. People who can recognize tell-tale features, in this case the rickety pit lane “building” or timing tower, will find this entertaining but for everyone else it’s a missed opportunity to learn something. 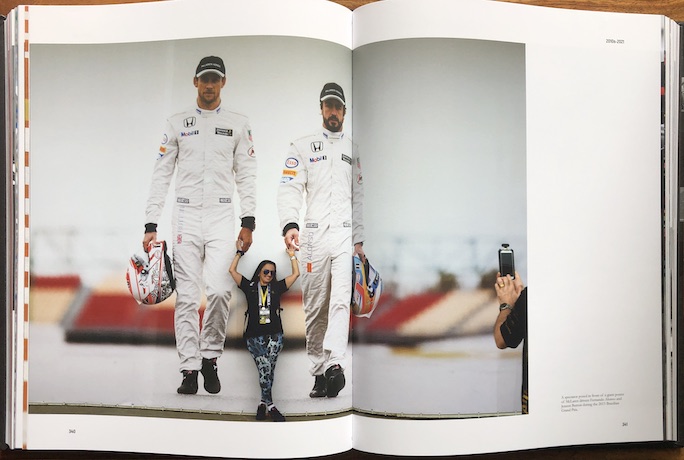 It’s clever, until it’s not. Couldn’t someone have told the lady that crossing her legs kills the illusion of walking with the big boys?

Next, let’s presume your interest in F1 is, say, casual as in “I could use some guidance.” There are three sections at the back of the book that are basically data driven. One is called “F1 Champions”—short profiles, with really, truly insightful descriptions. They are not listed in alpha order so it’ll take a moment to figure out that they’re in year order. Fine, but some drivers were champion more than once so what good is it to have all their subsequent titles recorded under their first win? If there were at least an explanation of this MO a reader would know what to make of this approach. Books that are like puzzles or riddles or need “solving” in any way are, ultimately, sadly, self-limiting. 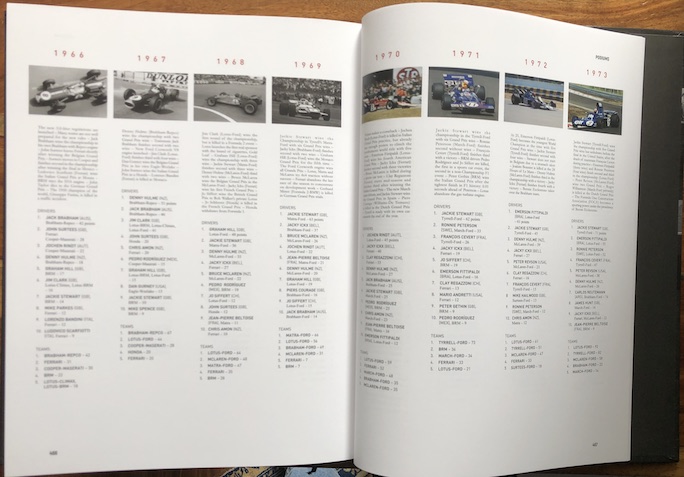 Another section lists “F1 Podiums.” What would you expect to find here? A look at the pages (above) shows eight years per spread, listed as columns beginning with a photo, a brief season recap, then 10 drivers by car and point score, then (beginning in 1958 when the Constructors’ World Championship was launched) 5 teams and their point score. But aren’t there only three podiums to be had? A more fitting title would have been “Championship Results.” Once you have figured it out, though, this is a handy reference to have (2020 is the last season) for the times when you don’t want to break out your all-knowing QPRS whose author, incidentally, was the proofreader on this one (i.e. the English version; the French one also lists a “Scientific Advisor”; wonder what that assignment entailed!. 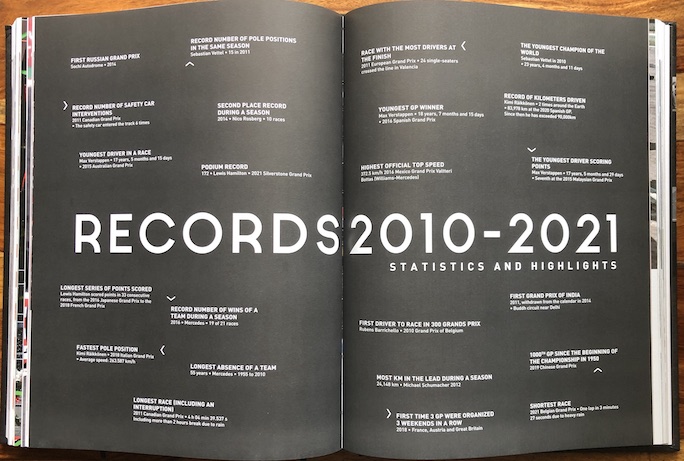 Ah, Formula One. . . . One of the entries on this spread calls out “Longest Absence of a Team: 55 years – Mercedes – 1955 to 2010.” True. And if you know your F1 history you know that after 2013 Mercedes would end up winning every single year for the remainder of the decade, utterly reducing the previous King of the Hill (Ferrari) to an also-ran. 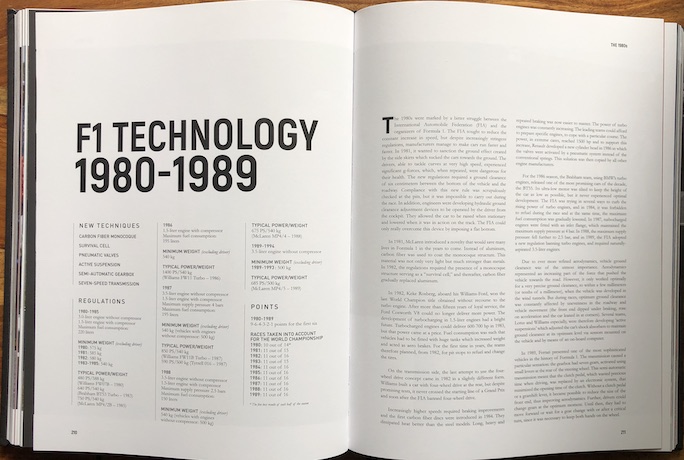 Still curious about that low price? The book was originally published in Danish in 2018 then translated and updated and is now available under three different publishers’ imprints in German, French, and English versions which were all produced at the same time and printer (sharing the same layout, including the title on the spine which means it runs in the European style bottom to top) thereby achieving an unusual economy of scale. And consider this: even the smallest version of one of Nygaard’s original limited edition prints would cost you more than this whole book. For instance, the cover photo (“Ready to Take Off”) would run you around $145 for an 11 x 11″ print and rise into the thousands for larger formats.

Long story short: this is a fine book, you’ll be glad to have it, you’ll see things you haven’t seen already, the areas in which it could have been clearer have no bearing on the photographic record.