A Unique Compilation of Stories About These Most Iconic Cars 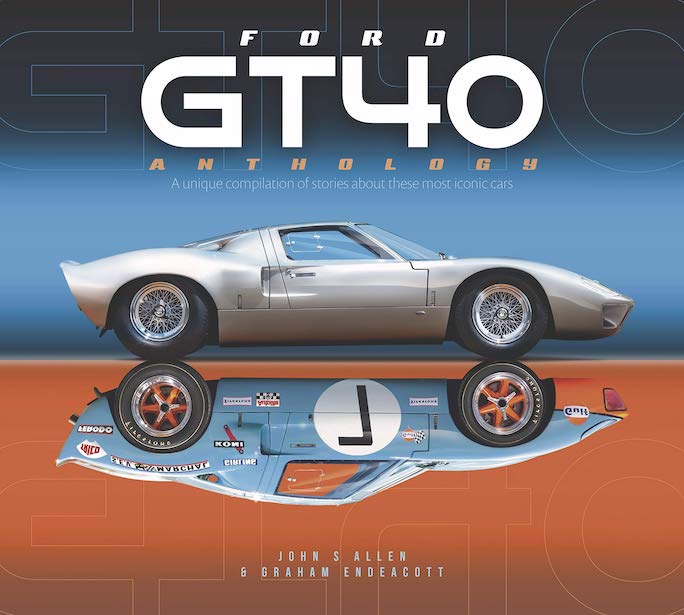 “Who needs another GT40 book? What can be said that hasn’t already been published? We think that when you read this book you will realise that, in fact, quite a lot of GT40 material has never before been published (at least within the pages of books), and you will find much that is very new to you. Unlike other books, this one is definitely not a history, nor is it a photo album or simple reprints of magazine articles. It is what its name implies, an anthology, and much of it covers new ground.”

You can’t complain if you pick up this book and find it is not a soup-to-nuts cradle-to-grave history of the GT40—the title tells you in two places that it won’t be that!

What you could complain about, provided you’re already familiar enough with this car to know it came in several variants, is that neither the title/s nor the authors let on that this book/anthology/compilation does not cover all of them. Obviously this is not out of ignorance, or laziness but because the missing model—the Mk II, in A and B spec, significantly modified by Holman Moody in the US to accommodate a bigger motor and other bits—has a disproportionately big story both in terms of competition history and its differences to the British-built Mk I. Ironically, it is the Mk II that most civilians would have in their mind’s eye because it was the hero car in the 2019 movie Ford v Ferrari. From stirrings elsewhere in the GT40 world we surmise that this model will be the subject of a future companion volume, along with other material that had to be dropped from this book for reasons of space/cost.

Look how long the captions are. All the photos have this sort of detail. People, places, cars—names are named. Gold star!

While on the subject of what is and is not in the book it might as well be said that this is not at all easy to figure out because the otherwise quite thorough Index does not contain an entry by Mark. But, hey, there is an Index so let’s take the glass-half-full view.

It is in the nature of an anthology that the material it presents will be grouped by overarching theme rather than chronology, and even that is a rather loose concept. In practical terms this means you could read this book cover to cover or let the Table of Contents direct your appetite. The Introduction teases by saying the book will advance the body of knowledge by debunking one myth and elevating another one to fact, and the press release further stokes the fire by saying “previously well-kept secrets [will be] divulged.” Super! But which ones?? You could read the entire book only to conclude that there are more than one candidate for either one. Is it the original name of the car? A nifty new bit of evidence shown here is an internal Ford memo from 1963—before the first prototype had even been built—referring to the car they would launch as the “Ford GT” as the “Ford GT40” (even better, it refers to a planned road car variant as “GT-46”). Or is the “secret” the unrecorded engine swap on a Le Mans car? Or that Ford did indeed experiment with Indy 4-cam engines? Or a very clever bit of photo analysis of what was heretofore thought to be chassis 1009 really being 1010? Or . . .? Not least, one of the chapters discusses in detail different iterations of a document that pretty much every Ford GT book references even if their authors have probably never seen it, “Appendix J to the International Sporting Code” (from which the name of the 1966 J-Car is derived).

Says the text: “For many years Appendix J was basically unknown to everyone other than those tasked with designing and building competition cars.”

An excerpt from the spare parts price list—which is great but will be relevant only to those to whom “a pound must consist of 240 pence” means anything.

So, there really is a bit of the treasure hunt flavor to this book, but, if nothing else the foregoing shows that there really is a lot to discover! The observant reader will surely note that individual chapters end with initials, GE or JSA, and probably deduce that they stand for the respective authors. It takes rather more presence of mind to also note that each is in its own color and that those colors, orange or blue, already appeared on the Table of Contents: what initially looked like a random choice now is revealed as a clue as to who wrote what. In a way, this book is too clever for its own good!

Ford GT enthusiasts will surely already be familiar with the authors’ contributions to that field. Both still have websites attached to their names but they have not been updated since 2013 and 2014. Allen, a retired accountant, is tending to his voluminous photo archive (also taking his own photos). Endeacott, the man behind the Roaring Forties website/forum, not only owns a replica GT40 but built it himself. He is currently rebuilding it into a more accurate version and you can assume that this will come out right because he has for years been an important resource to anyone seeking original parts and restoration advice.

A good number of principals on the Ford GT project are quoted verbatim, often at length. There is an enormous amount of illustrative material (photo credits are right in the captions, always an eminently useful touch) including facsimiles of paperwork, all exceedingly well captioned. One chapter each deals with rivals Ferrari and Porsche, another one elaborates on a relatively recent book by the same publisher that tied in with the aforementioned movie and adds detail regarding “a truly odd story about Ken Miles,” i.e. the one that he allegedly didn’t die in the fiery crash at the end of the movie but moved to Scandinavia. Scandinavia, Wisconsin.

Several chapters deal with individual cars, and rather than wondering/questioning why these and not others, the only point worth making is that the very patchiness of the material gives credence to the authors’ claim that a lot of material had to be cut, which would also have had an effect on the cohesiveness of the text.

Ever wondered what it costs to run a motor racing team? See how much John Wyer spent—and go look for a cheaper pastime.

It really is a book that will not overstay its welcome, moreover it is well written and cleverly designed, a joy to read and look at. Not to be unkind to other books by this important publisher but this one raises the bar mightily, especially when factoring in retail price. One can only hope that there really will be a second volume.

From trailer trash to trailer queen . . .

A Unique Compilation of Stories About These Most Iconic Cars