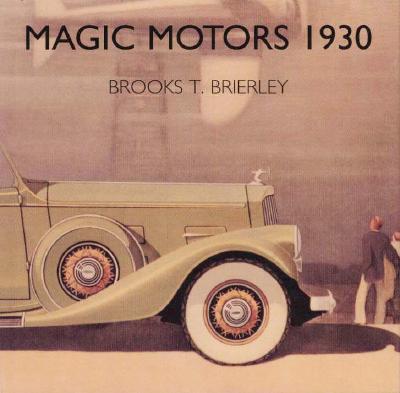 One way to approach this book is to consider it as an essay in photos. The introduction states right away that the reader is “assumed to have some familiarity with the subject” and that the book is not meant to be “a comprehensive marque-by-marque history.” With these caveats established, the reader’s expectation can be recalibrated and the book enjoyed for what it does do rather than fretting about what has not been included.

The basic premise is that the Depression forced changes upon the luxury car industry that were sudden, difficult to adapt to, and, in some cases, catastrophic. The book covers the years 1930-1942, showcasing many of the familiar names in automobildom such as Duesenberg, Peerless, Reo, Stutz, Pierce-Arrow and Rolls-Royce, among others. The emphasis is on American cars which, as Brierley correctly explains, enjoyed demand all over the world. With the exception of Rolls-Royce, none survived to this day (at least not in the auto business: Peerless, for instance, retooled to become a beer brewer.). And only four of the nearly two dozen firms whose work is sampled here lasted past 1940.

The book casts a selective spotlight on a few key aspects of this time. The author refers to these years as “the automotive industry’s reluctant metamorphosis,” a period marked by a need for product changes that were not driven by the desires of the auto manufacturers, but by forces beyond their control.

The book begins by explaining the role of the annual Automobile Salon held in New York, Chicago, Los Angeles, and San Francisco and how changes in the show’s format contributed to its demise. This is followed by a brief overview of the California coachbuilders and moves on to a section entitled “Business Points.” Here various manufacturers are described in brief sketches. The idea is to establish a baseline for the shape, financial and otherwise, these companies were in at a certain moment in time. Sales figures, internal costs, and number of registrations are used as indicators. The tables of domestic sales registrations (by selected states) track the years 1930-36 for 13 marques and reveal “the Darwinian effects of the Depression.” Export sales tables are based on US Department of Commerce data and show how the trade wars and exchange problems extended the Depression worldwide, infecting markets everywhere.

The bulk of the book, headed “Portfolio, 1930-1942,” consists of over a hundred pages of excellently reproduced period photos that do, indeed, illustrate the years in chronological order. Elsewhere, in the “Business Points” chapter, the organizing principle is not nearly as clear and seems rather random. The photos show the cars in the context of their time; how they were built, how they were sold, and how they were used. The literature buff will probably have seen a number of the photos before, but scattered throughout piles of other books and catalogs. This is not meant as a criticism by any means—given the subject matter (well-known cars from well-established firms) it is practically inevitable. What this book does nicely is reshuffle the deck; we know the cards but we may not have seen them in this combination before. Thus light is cast on the stage from a new angle.

The photos seem carefully selected and, together with detailed captions, educate and sharpen the eye for details. This is an excellent book to pick up in quiet moments and let the mind wander. A well-compiled index and bibliography round out the book. An entirely peripheral observation is that there are a few peculiar typos of the “spellchecker” variety that a human eye and mind would probably have dispensed with.

And just to show that no detail is too small, consider the nice touch evident in the intentional use of the Gill Sans typeface of 1928, especially in a book about the ’30s. Trivia buffs take note, for it was Eric Gill who designed the intertwined Rs in the Rolls-Royce logo.

Posted Under: Automobiles, History, Out of Print | Author: Sabu Advani | No comments yet

Zoom, The Global Race to Fuel the Car of the Future »
« A Gullwing at Twilight, Shifting Gears Gracefully