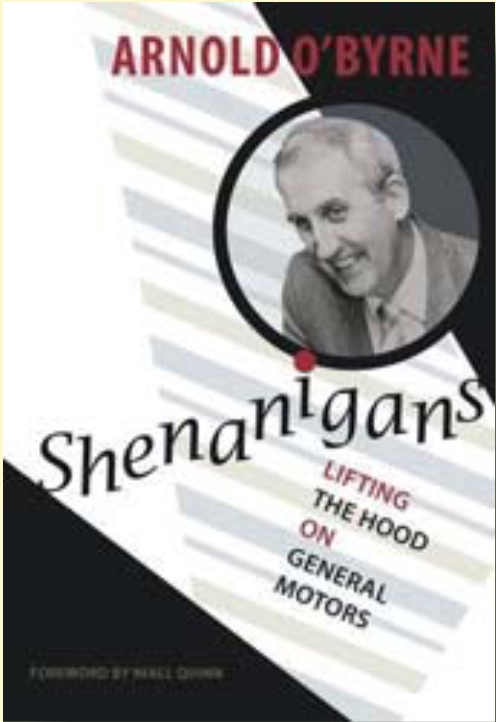 This is the autobiography of Arnold O’Byrne who headed the internal audit of Vauxhall and all GM component operations in the British Isles and the Republic of Ireland. He then put in fifteen years as Managing Director of Opel Ireland until he concluded his career as President of GMAC Commercial Mortgage Bank of Europe and Chairman of the servicing operation.

An internal audit is far more than a dry financial review. A sample of some of his encounters provides insight to an auditor’s role. Uncovering supplier kickbacks involved following trails, some of which got awfully close to the top of GM’s European operations. O’Byrne knew enough about the product to recognize a vehicle that had extras not consistent with a certain model, only to discover the vehicle was consigned to a senior employee, priced without any of the extras and also missing a build card. Not even GM dealers were immune to his searches that identified the exporting of cars to fictitious owners. Gathering evidence even involved intercepting and pulling over a car hauler to check serial numbers and making house calls on the supposed owners. Unfortunately, someone who might have known what was going on was shot the day before an agreed interview with O’Byrne. He found out how Vauxhall was fudging their internal quality control evaluations and uncovered a drug smuggling operation using GM components, shipped from Spain to the UK.

The mandate for taking over as Managing Director of Opel Ireland was to make it profitable or shut it down. He credits a long-term sponsorship of the Football Association of Ireland which helped Opel gain market leadership in 1996. The Republic of Ireland had ceased selling Vauxhalls after 1982, concentrating on Opel. Northern Ireland was effectively part of GM’s UK distribution and sold Vauxhalls.

As a patriotic Irishman, O’Byrne championed GM investment in Ireland to help reduce high unemployment. He attempted to invite GM Chairman and CEO Roger Smith, through formal channels, but when that failed to elicit a response, he resorted to a personal contact who made it happen. He had Roger all to himself with no other GM executives present. Arnold even served as chauffeur and fishing companion. In due course, GM’s subsidiary Electronic Data Systems (EDS) opened an Irish office providing employment for IT personnel.

What the reader will remember about this book is the fearless nature of O’Byrne, born out of basic integrity. He also would not tolerate bullying, no matter whether the source was senior or not. There is little doubt that he ruffled feathers in his auditing role, but it appears that he developed a sense of immunity. Rather than the typical

GM rotation among posts, his long term as MD of Ireland was either acknowledgement that only he could handle the tricky political situation or an exile.

Unfortunately some readers will assume that the author embellishes the truth and portrays himself as a savior. However, a fellow GM Managing Director, now also retired, shared the following comment with this reviewer about O’Byrne:

Arnold is a very special guy and the way he depicts himself in his book is pretty much what you get. A hard worker, totally honest, loyal despite all frustrations, in love with soccer, deeply religious, great sense of humour and all that with the heart of a (benevolent) auditor. In his book he vents the frustrations he had to suffer when with GM. He was not the only one, but his book is a good read.

This book is not a wholesale critique of GM; instead it is an unvarnished reflection of certain events and people within GM. An automotive researcher may not find historical facts, but instead will gain an understanding of the challenges to keep employees honest and honorable. It is different but well worth reading.

This review appears courtesy of the SAH in whose Journal #271 it was first printed.