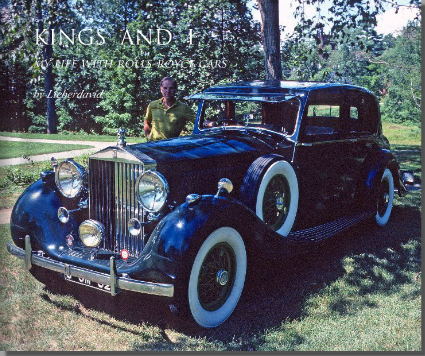 How does a high school teacher come to own a Rolls-Royce, several in fact, and make that last for 40 years? For that matter, how come he gets to live in Thailand and summer in Maine? Must be some high school! He taught mathematics and computer science so working with numbers and high-level concepts probably helped, but that is not the story here.

Actually, this book is not so much a cohesive “story” at all—the author himself thinks of it as “a memoir with a lot of photographs.” Now in his seventies, Bourdain has certainly racked up enough years, and enough miles, to have a few tales to tell.

He is, it should be noted, a member of the marque club in the US, the Rolls-Royce Owners’ Club (and, no, these days you do not need to be an owner to belong), and this illustrious organization plays a distinct role in his experiences. It is also relevant to note that he is a long-time amateur photographer. Now, many car club members, or anyone at all for that matter, might at first sight think that “anyone” who’s been around interesting cars for a while and knows how to wield a camera could put such a book together. Well, yes, but do they? Do you?

The first 40-odd pages are Bourdain’s reminiscences about the cars he owned, some of which he probably wished he had kept (cheap to buy in his day but now fetching astronomical prices) so as to finance an even more colorful retirement. His interest in the marque went so far that in the mid-1970s he attended the Rolls-Royce School of Instruction that taught chauffeurs how to properly handle and maintain a Rolls-Royce car. Subsequent chapters focus in chronological order on European and mostly US club tours and meets from 1975 to 2011.

All the photos are Bourdain’s. There is, it must be said, rather too little detail when it comes to dates, chassis numbers, or coachbuilders. Another couple of sets of eyes on the manuscript by his fellow club members could have easily filled many of the gaps.

Long-time RROC members will meet in these pages many people and cars they’ve long known or long forgotten. And, who knows, it may just inspire someone else to rummage through their own collections and self-publish such a book!