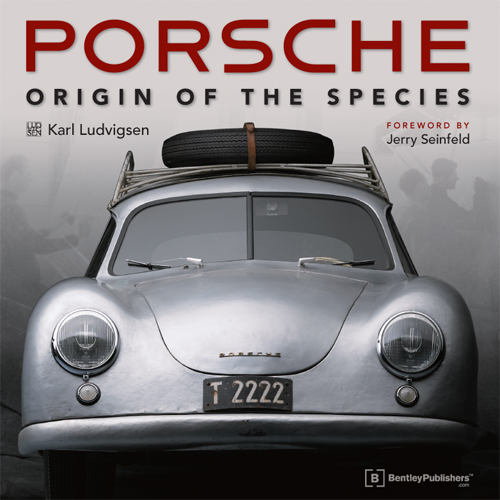 “When on board H.M.S. Beagle, as naturalist, I was much struck with certain facts in the distribution of the inhabitants of South America, and in the geological relations of the present to the past inhabitants of that continent. These facts seemed to me to throw some light on the origin of species—that mystery of mysteries, as it has been called by one of our greatest philosophers.”

Out of print for too long, this important book is now back in stock for the 2018 holiday season—and it didn’t even become more expensive. Since it first came out in 2012 it has remained a definitive account (and won the Motor Press Guild’s Dean Batchelor and Best Book of the Year awards), and everything we said six years ago still holds:

Darwin’s mystery of mysteries. . . . Applied to Porsche cars, it turns out there is still today plenty of mystery, or if not mystery then new interpretations and new connections. That a book brimming with such newness should come from the pen of the selfsame author who has advanced the state of the collective Porsche knowledge more than any other is rather astounding but it would be entirely erroneous to extrapolate from this statement that Ludvigsen’s unimpeachable previous work was deficient; it merely means that knowledge never stands still, new sources are still being found, and new thoughts beg to be thought. 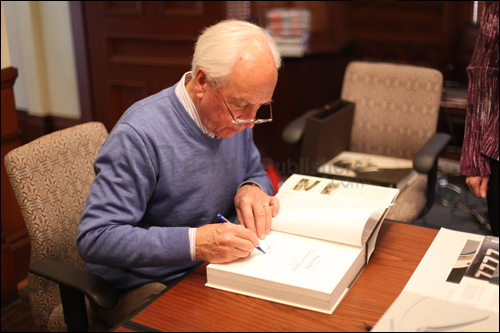 Ludvigsen is not the sort of scholar to have chosen the title for this book just to be clever. The whole concept of evolution implies not just a specific point in time when out of nothingness a first is created, but a subsequent fundamental linearity in which incremental advances result in improvement by degrees. Unlike other automotive nameplates that have survived long enough or been reanimated often enough to be perceived as iconic (Corvette, Thunderbird, Jeep etc.) Porsche is alone in always having a model in its line-up that remains in unbroken technical and philosophical continuity to its forebears. What any one iteration of car on this evolutionary ladder does is picked up and carried forward by the successor and improved upon—and on, and on, and on. Intellectually, if for no other reason, this is a most satisfying state of affairs because it means that Porsche got it right, back in the day when their world was young; so right that their initial understanding of what a sports car is and how it should behave has been improvable only by degrees and never needed a wholesale “out with the old/in with the new” wiping of the slate. 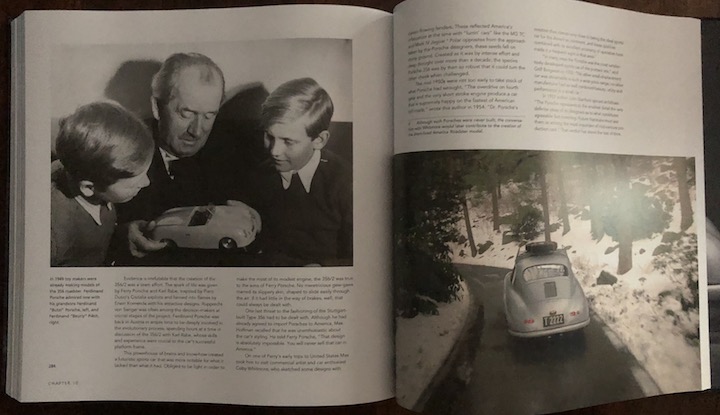 If you’re the thorough sort of reader you will have internalized Ludvigsen’s previous Porsche must-read opus, Ferdinand Porsche, Genesis of Genius. That book brought the story up to 1933 and develops fundamentally important engineering and biographical themes without which the topics this new book covers are devoid of backstory. 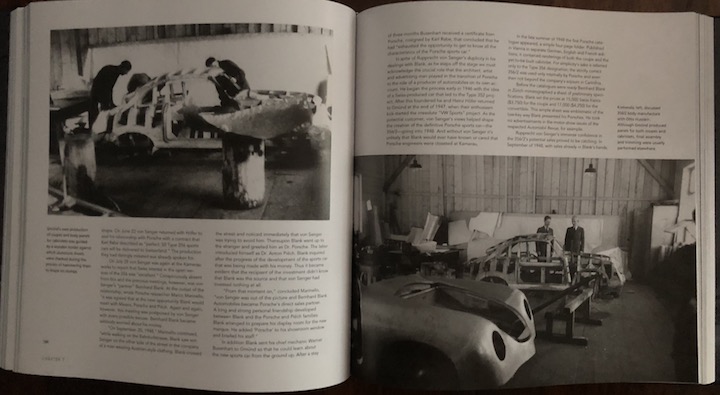 It is a cruel truism that the very reader who is himself a subject-matter expert and is blessed with photographic memory and instant recall will be the one who struggles hardest with a book that reshapes the canon of established wisdom as this one does. Certain things must now be unlearned but that requires guidance as to exactly what it is that is altogether new or, harder still, just slightly differently nuanced. Wouldn’t it be convenient if the text called out all such nuggets in color?! This would surely look peculiar, and might well be seen as self-aggrandizing so the publisher has posted a list of the “new & improved” bits on their website. While helpful, you’ll still have to chew on every word in the new text and compare it to what you already know. (Examples: it used to be said that Ferdinand Porsche objected to being moved to Austria. Wrong. Was Dusio the driving force behind Porsche taking up F1 racing? Did the 356’s frame get better or worse after being reengineered for series production? The July 1948 race meeting at Zell am See is not Porsche’s first competition success.) Looked at differently, the reader who will most comprehensively benefit from the new book is the one just starting out, not only in regards to Porsche specifics but engineering and automotive history in general! 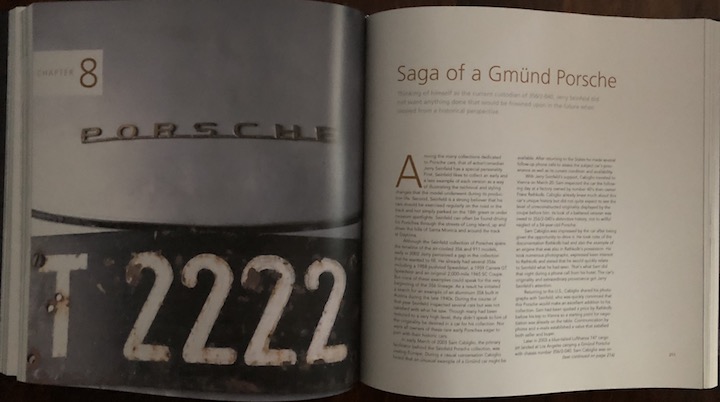 In simple terms, this book examines the 1930–1950 influences (early Porsche-designed VWs, the Type 64 and Type 114 F-Wagen, the Type 60K10 Berlin-Rome-Berlin coupes, wartime projects etc.) that led to the Porsche 356, the one that has influenced all subsequent ones. Ludvigsen can rightfully claim to have been close to Porsche history from 1948 onwards and to have an organic familiarity with and understanding of its people and products. As an industry executive and later commentator he also has a catholic grasp of automobildom as a whole and thus one of the first themes he develops here is to put Porsche history into the context of its peers, specifically the pioneering role of the French and Italians in the area of streamlining. New research into Swiss sources (re. the Type 352 the Swiss hoped to build ca. 1946) and even heretofore untouched material at the Porsche Archive shed new light on old matters. Even such well-explored topics as the Cisitalia relationship receive massaging. US comedian Jerry Seinfeld who owns the famous ex-Otto Mathé 356/2 Gmünd Coupe factory test car and ice racer also owns the diaries of Ghislaine Kaes, Prof. Porsche’s nephew and secretary, and they too yield new interpretations on the micro detail level. 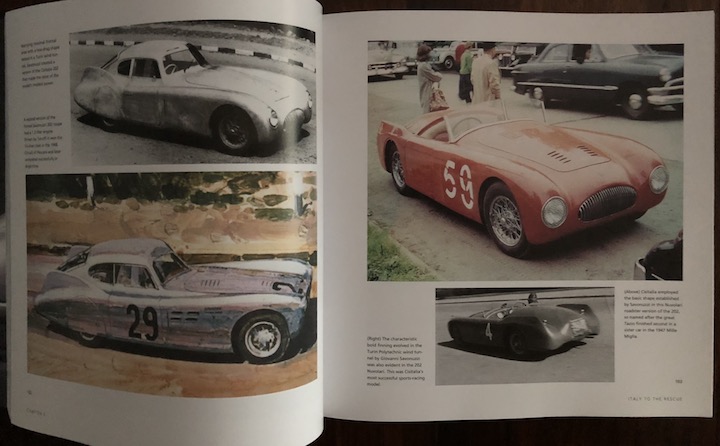 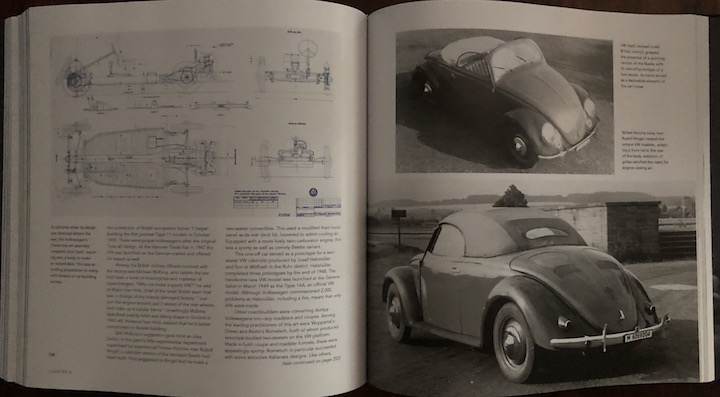 Porsche connoisseur Seinfeld’s car (he also wrote the Foreword) is neither the first nor the oldest surviving but it is in exceptionally good unrestored condition and thus ideally suited as the book’s banner car, here suitably captured in Michael Furman’s excellent photos. A number of modern-day luminaries—Freeman Thomas, Miles Collier, Robert Cumberford and Tony Hatter—share their thoughts on matters Porsche and important names from the days of yore—Walter Glöckler, Ghislaine Kaes, Erwin Kommenda, Otto Mathé, Petermax Müller, Louise and Anton Piëch, Karl Rabe, the “English Patient” Laszlo Asmasy—are given due consideration. 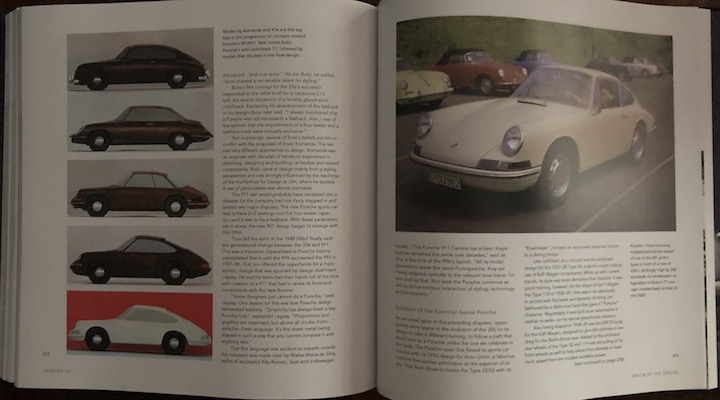 Even on the illustration front there’s much new here. Appended are factory docs for chassis 040, a facsimile of a 356 handbook in German, and a Bibliography. The Index is most commendably layered.

Even if you have no specific interest in the “bathtub Porsche,” this book is desirable because it casts a wide net, connects new dots, represents a superlative research and writing accomplishment, and is a properly beautiful book.