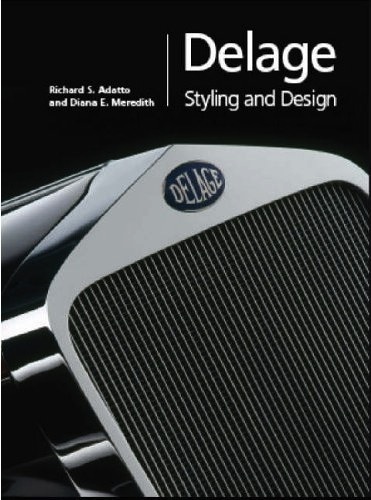 The most challenging aspect of Delage, Styling and Design is keeping one’s attention focused on the words that are printed on the pages. That’s simply because the images keep pulling you back to look some more. Few can resist the visual feast of those lush, lovely sculpted lines created by Henri Chapron, Marcel Pourtout, Figoni & Falaschi and others who “clothed” the fine machinery from Delage, the company conceived and created by Louis Delâge.

As if the appearance of the vehicles themselves in historic and contemporary photos weren’t enough, they are augmented with selections of original designer’s drawings. A number of the contemporary photos were accomplished by photographers whose styles are so distinctive you only refer to the list of photo credits at the end of the book to affirm what you already had noted mentally.

Michael Furman is one, Scott Williamson is another (although Williamson is mis-identified in those credits where his surname is a truncated Williams), and Michael Zumburnn is yet another. And it’s these contemporary photographs—of the various Delages restored to their full magnificence—that set this book apart from the two that my fellow SpeedReaders.info reviewer Sabu Advani describes elsewhere.

When you finally discipline yourself and concentrate on the words, you’ll find they provide a fine overview of the history of Delage. From its very beginnings in 1914, you’ll follow the man and his company, through his racing obsession that was both the source of his technological developments that helped set his cars apart, but also contributed to the subsequent bankruptcy of his company in 1935. In between were the much-storied 1920s and wealthy people, some famous others just quietly wealthy, who commissioned splendid custom-bodied automobiles.

The authors, one the acknowledged North American authority on French cars with aerodynamic styling, Richard Adatto, the other interpreter/writer Diana Meredith, provided the publisher, Dalton Watson Fine Books, with material from which they produced this handsome, authoritative tome on Delage. Authoritative does not mean to imply new research, but rather a logical presentation of the information that existed as of the 2005 publication, thus enabling the reader to gain a clearer appreciation for what went into the creation of those gorgeous, sensuously styled cars with real driving and handling verve.

Sixty-four of the book’s 136 pages, devoted to showing some of the more outstanding cars from the different carrossiers, are arranged alphabetically by coachbuilder’s name. The text shares highlights of the Delages created by each house. Then there are several pages putting you, the reader, in the driver’s seat of a D8-120. You experience the braking (!), the Cotal gearbox, acceleration, the genuinely precise and accurate steering, and the true comfort of the luxurious interior. The concluding 14 pages are reference lists. Included are Delage race car specifications, competition (where/when/how finished) records, and another showing speed records set. Last are the charts of race and passenger car production 1905-1949, and specs of each, concluding with a comprehensive summary of Delage chassis numbers by year. The book so logically presents the information that it was correctly determined an index would have been superfluous.