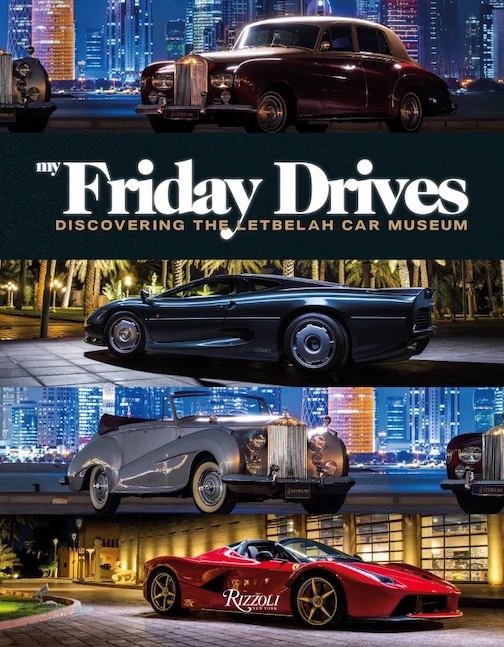 “Not that you’ll care when you first step inside. In fact, you won’t be thinking about anything other than the cars. To your right the red of Ferraris past and present. The glimpse of a Testarossa intake; the nostrils of an F50 jutting out beyond the NACA ducts of an F40 . . . you want to dash over and start exploring. Then maybe you’ll notice the grandeur of a Silver Ghost towering over the sportscars, its deep red leather seats, alloy bonnet and wooden running boards like a window into another time and place, or perhaps you’ll be distracted by the rippling elegance of the Jaguar XJ220 in stunning Silverstone Green. Where to look? Which direction to take? Maybe a deep breath and a second to relax.”

Yes, it’s on a farm, on an oasis, in the desert but, no, it’s not a Fata Morgana. You really did just see six, ten, a dozen Rolls-Royces of various vintages—or BMWs or Ferraris or Jaguars—round the corner. That was Omar Hussain Alfardan and his buddies on their Friday/weekend drive. They like to take out the cars by marque so as to better sample their virtues when they swap and compare rides. Ah, to be rich, which is not that hard in Qatar whose main resource is—wealth. If you follow current news you know why: vast oil and natural gas reserves.

It’s almost like being there. Almost. This is a four-page foldout. 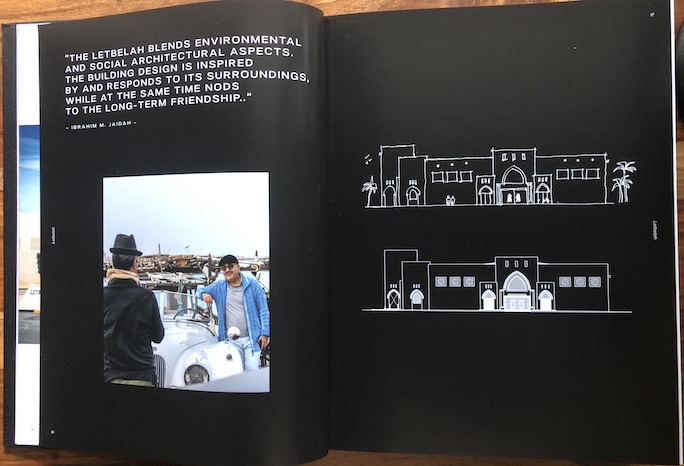 Even if you have occasion to frequent Qatar on the the Arabian Peninsula you may have never heard of the Letbelah. And even if you have heard of it you’ve probably not been in it because for that you’d need to know the secret handshake: the Letbelah is a private museum and admission is by invitation. This book, then, is your all-access pass, and while it tells much it doesn’t establish a lot of background or context. For instance, Omar Alfardan is not the only big collector in these parts, or that there is a burgeoning classic-car scene in Qatar with annual concours-type events as well as a recurring exhibition hosted since 2012 by the National Museum of Qatar called Mal Lawal (“of the past”), the most recent one taking place the year this book came out (there were so many cars available that the display changed every three months). Not least, the Qatar Museums organization unveiled in March 2022 plans (on public view until 1/23) for a Qatar Auto Museum in Doha designed by Pritzker Architecture Prize winner Rem Koolhaas’ firm, the Office for Metropolitan Architecture. In other words, the Letbelah is a plenty big deal but the whole scene is bigger and you’ll be talking about Qatar a lot more in the future. 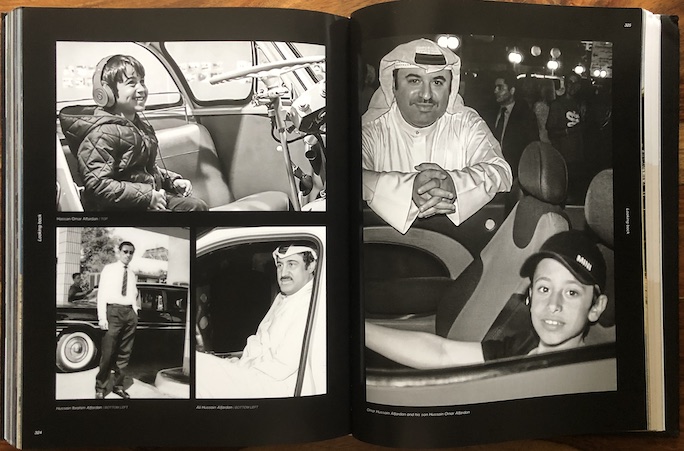 Another thing author Bovingdon (b. 1977) keeps mum about is how he got the gig to edit this book. The English journalist (evo, DriveTribe, Head 2 Head, Ignition) and racer is an animated and articulate fellow and definitely has cars on the brain; US readers can see him in action as one of the Top Gear America tv hosts.

Of the book’s ten chapters, five are dedicated to specific marques/brands and one to “The Ecclectics,” a miscellanea of machinery. The first two explain the building and its contents including some of the artwork/automobilia. While it isn’t mission-critical for the reader to know Alfardan’s business dealings, appreciating that his forebears started in the pearl industry, branched out into jewelry and then added a multitude of subsidiaries in the Financials, Property, Hospitality, Marine Services and Medical sectors would help get one’s head around the enormity of the operation. And of course the auto angle—Alfardan Automotive Group: first BMW then Jaguar Land Rover, Ferrari, Maserati, Mini, Rolls-Royce, Fiat, Abarth, Alfa Romeo—which ultimately makes his footing in the car scene different from any of the other Qatari car guys. 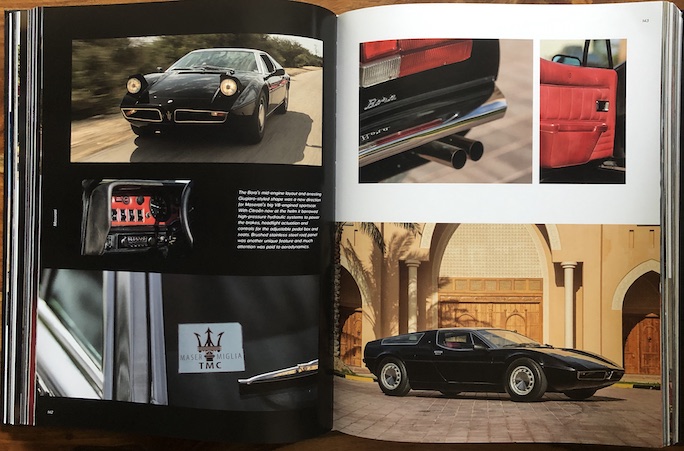 The Letbelah houses 120 cars and over 130 motorcycles and each can be ready to roll within 10 minutes. The vehicle coverage, by Luca Venturi, is graced with an outstanding feature whose import will only by fully realized by those in the classic-car world who track the comings and goings of cars: every car and bike is identified by chassis number. Even the Pebble Beach Concours is falling short in this matter! Whoever made this decision deserves a medal. The car descriptions are deep enough to give a good account of a car’s history and place in history. A good number of them have an international ownership trail and the coachbuilt cars are utterly recognizable to aficionados. The photography, by or overseen by fellow Italian Mikael Masoero, is astute in the sense that he knows what to aim the camera at and how to capture it. 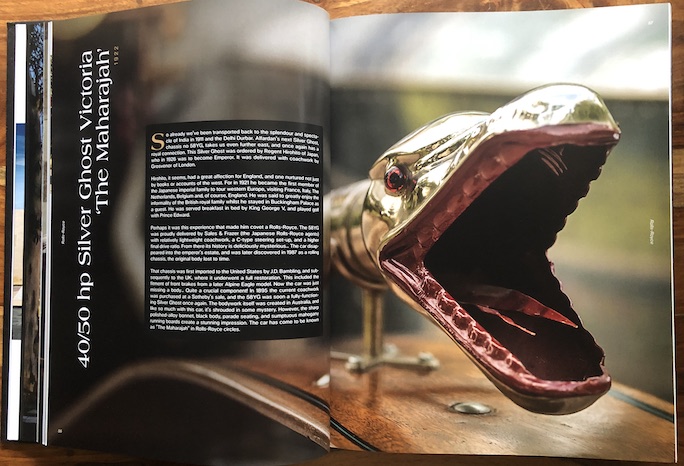 This photo is a fine example of different textures and finishes, and even this particular angle plays to the boa horn’s elongated contours. And that gaping mouth. The horror. (This is a Rolls-Royce; if it were a Tesla the owner could program it to hiss! Progress?) 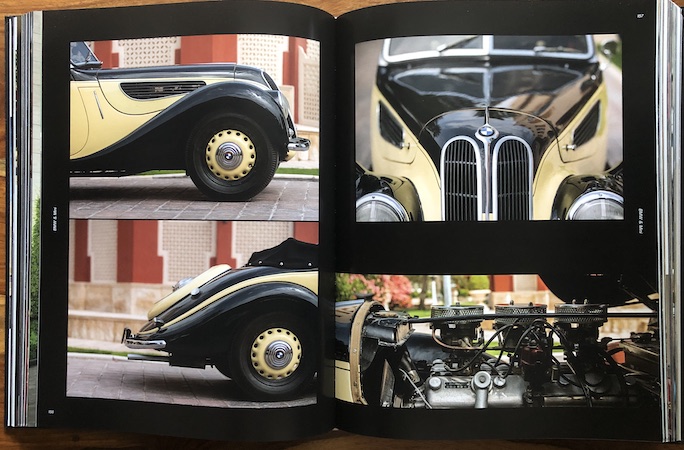 This being a Rizzoli book means the book design is complex and clever, and paper and photo reproduction are high-level. But—this is a mass market and not a fine art book so, on the printing end, there is a certain amount of noise visible especially in the blacks.

With all the lovely cars to look at one can well imagine a 21st century Western reader reading right past certain ideas without realizing their different valence in Alfardan’s culture: family dynamics, community, tradition, and on some level a different relationship with material wealth. Since much of the text is derived from interviews with Alfardan these things do get mentioned but remain in the shadows. 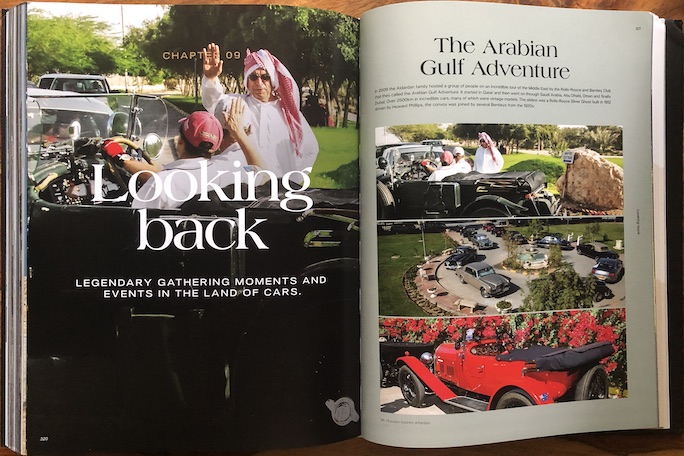 “Although some wiled away the journey in air-conditioned comfort, many of the cars were vintage models.” What an odd thing to write when of the 70+ participants of the three-week Arabian Gulf Adventure in 2009, less than a quarter were prewar cars (5 R-R, 11 B). The newest cars were Bentley GTs! It’s this sort of fanciful reportage that raises unnecessary questions. Also, Bovingdon letting Alfardan’s remark stand unamended that his family “hosted” the group at their oasis obscures the fact that Alfardan Motors, as the official Rolls-Royce dealer, and the Alfardan Group as a whole, in conjunction with other regional entities, took a significant role in prearranged underwriting/sponsorship and logistical support. A number of participants wrote daily missives to their respective clubs.

One event (above) is singled out, several times, as a foundational moment in the genesis of the Letbelah idea. Readers from the Rolls-Royce/Bentley world will perk up when reading of a 2009 driving tour “of the Middle East by the Rolls-Royce and Bentley Club”—and they will wonder which club that was because there isn’t one by that name. What is meant is instead the venerable RREC, more specifically a group of individual members who formed a committee to mount this tour (as they had done previously [Malaysia 2001, Borneo 2005]). 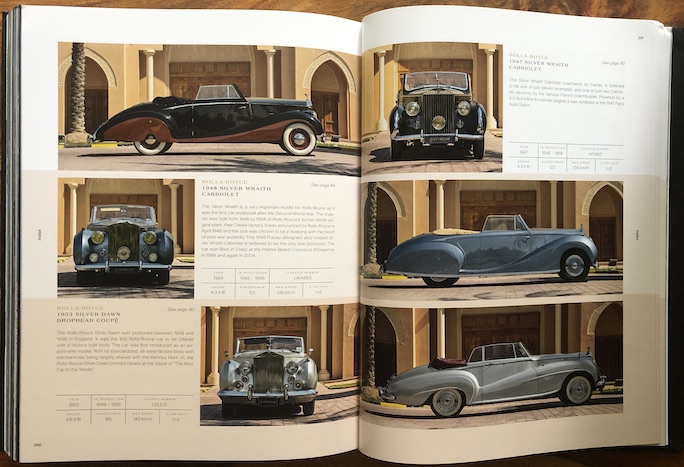 The book has an Index (above), actually designated as a separate chapter, but it’s an unusual concept and something more common in art/catalogue raisonné-type books: there are no text entries but photos of each vehicle (divided by marque) accompanied by a brief recap, specs, and page reference.

This is quite a mammoth book, all around a good idea, well conceived and executed. It’s the only one on this subject. One day it’ll be all sold out and then you’ll cry if you didn’t get yours in time.