100 Years of Brooklands: The Birthplace of British Motorsport & Aviation 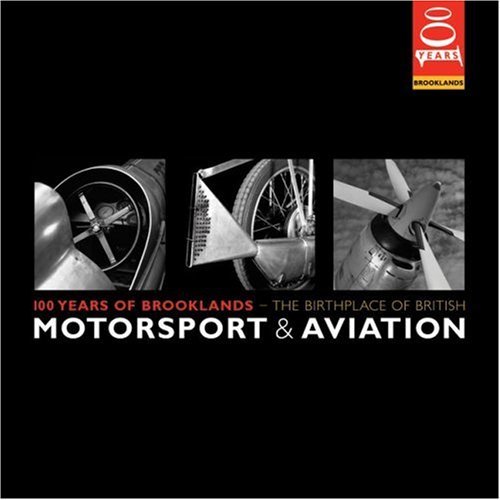 by Allan Winn and John Pulford

Commissioned by the Brooklands Museum on the occasion of the famed circuit’s centenary in 2007, this book tells its story mainly in photos.

To fully appreciate the importance of Brooklands in its day it must be remembered that, at the time of its founding, no form of racing was permitted on public roads in mainland Great Britain. British car and also motorcycle development were thus stymied by not having any sort of venue, let alone a proper one, for testing and racing until 1907. That year landowner and motoring enthusiast Hugh Fortescue Locke-King transformed 330 acres of his Brooklands estate into the world’s first purpose-built race track replete with all the required infrastructure. Its 2.75-mile banked oval was 100 feet wide, rising at its highest a dizzying 29 feet above its base, making it perfect for sustained high speeds.

Within days of its opening and prior to the first formal race meeting, S.F. Edge validated the effort by running a 60hp Napier for 24 hours and 1,581 miles at a then astronomical 65.9 mph average speed. Until racing ceased in 1939 (due to the start of World War Two), hundreds of records were set at Brooklands including the outright World Land Speed Record, not once but three times. Anyone who was anyone raced at Brooklands in cars, and from 1909 on motorcycles, too.

Although motorcar racing would not resume after the war, aviation which had established itself at Brooklands as early as 1908 would continue until 1988. By then Brooklands would have witnessed flight from the first British-designed plane to the building of Concorde components. In all some 18,500 planes had been built there and in fact it was the site of Britain’s largest wartime aircraft manufacturing center.

Divided into three main sections by type of motivation—cars, motorcycles (with a bicycle subsection), and aircraft—all this history is well presented in the book, as is the current use (albeit limited) of the circuit. Each section begins with a photo spread of the most outstanding human exponents of the various activities—drivers, riders, aviators—which is then preceded by a brief overview of the pertinent history, and followed by a selection of the most outstanding mechanical exponents. These are presented in the form of a brief narrative and many excellent photos.

All photos but one (a racing program) are black and white, even the evocative new ones by Ron Bambridge of the many artifacts now on display at the Brooklands Museum. Bambridge, who has won several London Photographic awards and a Kodak award for best panoramic photography, along with art director Peter Campbell come from an advertising background and make full use of their skills in every aspect of layout and design. Many of Bambridge’s photos are full-page, often close-ups and often taken from unusual angles of the reach-out-and-touch-it kind. They are still lifes with the purpose of stirring up emotion rather than being clinically correct, fully lit, bumper-to-bumper museum-type photography. A smudgy tin of grinding paste on a dusty shelf, caressed by dappled sunlight never looked so good!

Copyright 2010, Sabu Advani (speedreaders.info). Adapted from a review previously published in The Flying Lady, the publication of the Rolls Royce Owner’s Club, which he edits.