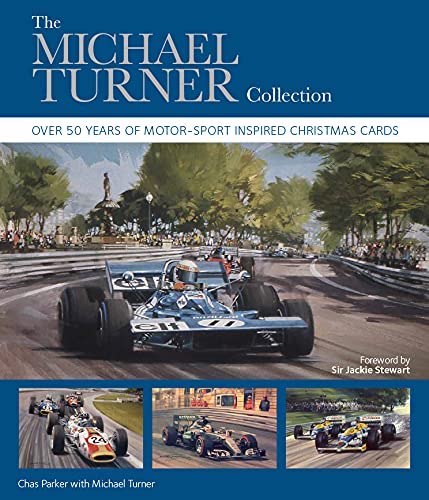 “The idea for producing a set of Christmas cards depicting motor racing scenes instead of the usual mixture of holly, snowmen and robins, came from the man who dreamed up many good motor racing-related ideas—John Webb, then head of Motor Circuit Developments, which ran Brands Hatch, Mallory Park, Snetterton and Oulton Park. Michael told me that he remembered thinking, ‘What a strange idea, who wants Christmas cards with racing cars on?’”

British artist Michael Turner (b. 1934) has been putting out these Christmas cards since 1960 (under his own imprimatur since 1963), and if you’ve been a collector for any length of time, you might as well admit it: you probably didn’t use them for their intended purpose but kept them for yourself! 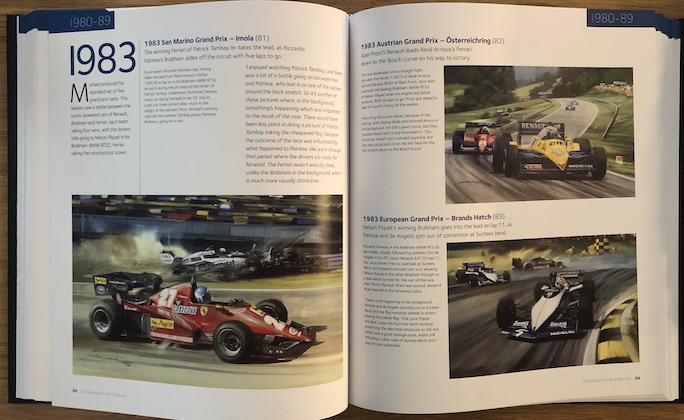 You’ll be spending a good while on each image to take in all the detail.

It’s funny to think that publisher Philip Porter was skeptical that there would be enough interest for a book about the cards, and if that’s all this book offered he might not be wrong because Turner’s own website contains all the same information and more. The book doesn’t just work as a catalog but also on an entirely different level inasmuch as the narrative accompanying the paintings serves as a decades-spanning continuous record of the highlights of each season’s Formula 1 racing. 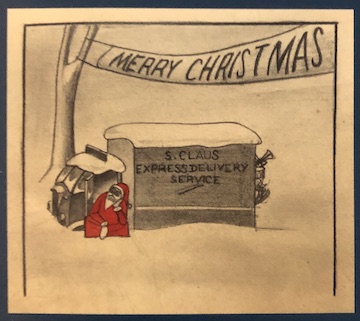 Did you draw that well at the age of 9??

You could pull a dry racing annual with all the stats and regs and specs from the shelf to refresh your memory—or while away the hours with these lovely paintings, and hours it will have to be because it would be entirely wrong to rush through these images that Turner has fitted with a level of technical and situational detail quite unmatched by any other artist. Turner not only attended the events he drew (until one penny-pinching Bernie Ecclestone refused to issue him credentials, telling Turner to just draw what he saw on TV) but also walked the tracks and created reference drawings of backgrounds and buildings and the like to lend realism to his paintings. He ended the Christmas cards in 2016, and it wasn’t simply old age—he was 82 then—that brought that about. The book ends with the five cards of that season, and also includes an Appendix that lists the “pencil print” cards and shows 24 additional cards that had been produced outside of the Christmas sets (but there is no mention of one final F1 painting, in 2017, of the British Grand Prix, probably because technically it was not a “card” but larger-sized). 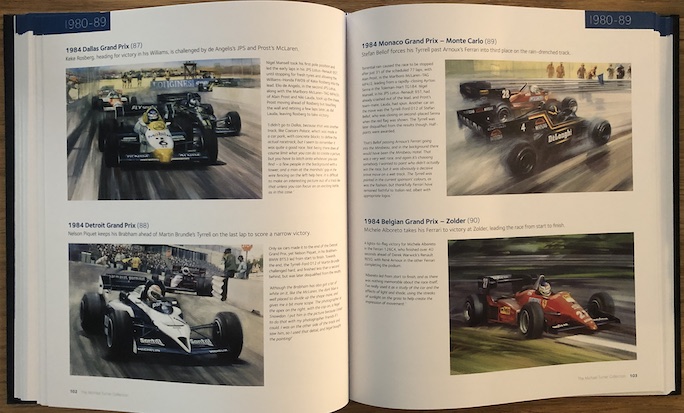 Water spray, brake dust—Turner sees it all and paints it all. 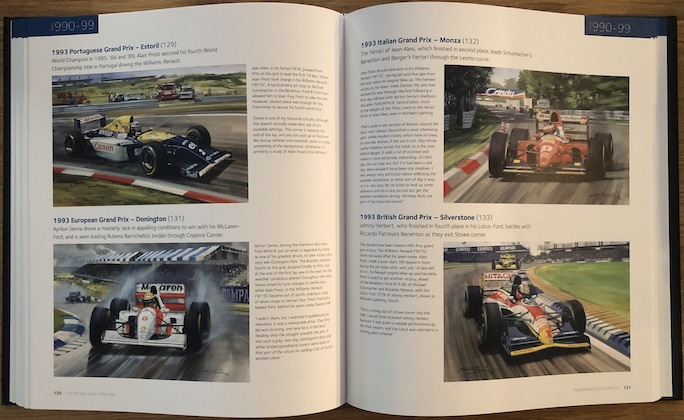 Turner on his own is an astute and deeply informed motorsports enthusiast and could have put forth a well-rounded book by himself but partnering with award-winning author Chas Parker adds another dimension, the result being that each image is accompanied by a synopsis (set in roman) by Parker of the event depicted, followed by Turner’s commentary (in italics) about the specifics of the painting as well as nano detail such, for instance, the sidewall deflection of a sliding tire or the creases in the starter’s jacket sleeves. The latter uniquely sets this book apart from, say, a photo book because Turner can paint from a vantage point a photographer could not physically occupy. Besides, says Turner, “If you could do it with a photograph, there wouldn’t be much point in painting it.” 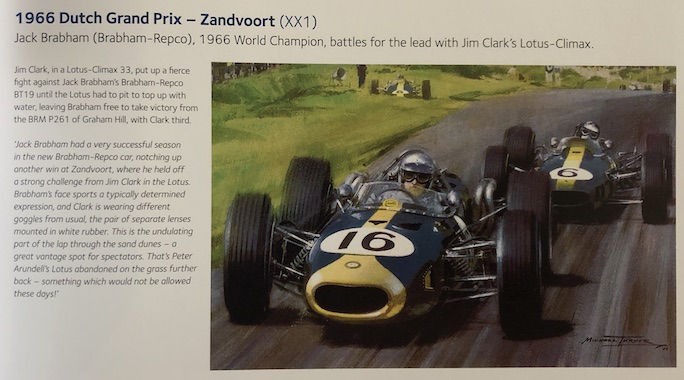 Parker and Turner are experts, no question. But they may have forgotten that not everyone is. For instance, in most cases here, if more than one car/driver appear in an image, you’ll be expected to know on your own who is who. Sometimes, the accompanying text may yield a clue. Let’s examine a random example where it does—but still gets stuck in preventable ambiguity:
The main caption (it is not clear if this is Turner’s title for the painting or Parker’s writing) says “Jack Brabham (Brabham-Repco), 1966 World Champion, battles for the lead with Jim Clark’s Lotus Climax.” Grammatically speaking, the car in front has the lead and is attempting to maintain it whereas the one behind it would be the one battling to get it. With that logic in mind read the caption, look at the artwork, and answer this: who is in front? Clark. Not. At least not in this drawing.
Turner’s caption, the bit in italics, has this to add: “Brabham’s face offers a typically determined expression, and Clark is wearing different goggles from usual, the pair of separate lenses mounted in white rubber.” Did that help? (Do keep in mind that the image on the page is a mere 6.5 x 4”)
On the upside, the degree of detail Turner is, first of all, cognizant of and, secondly, able to render in his images is really extraordinary.

To clarify an earlier remark, it was Parker, around the time of Turner’s studio’s 50th anniversary in 2013, who threaded the needle for a book project because he wished for just such a book but it didn’t exist. He had become a collector of the cards in the mid-1970s, finding that cards and even whole sets from earlier years were still to be found. In this regard the book features another singularly useful aspect: all cards are identified by the alphanumeric identifier Turner’s then-wife Helen had assigned (they where not issued chronologically; tricky!) when she started the Collector’s Club in 1992 (it ran until 2012). Parker’s Preface and Turner’s Introduction lay out enough background to understand the origin of the cards, Turner parting company with motorsports PR man John Webb who had hatched the Christmas card idea, the founding of Turner’s company Studio 88, and the purpose of the Club as a resource to collectors. That Turner’s son Graham is an accomplished fine artist in his own right and an occasional collaborator with his father is something you’ll have to explore elsewhere, along with the elder Turner’s phenomenal body of work in aviation art (he is a pilot and founder member of The Guild of Aviation Artists, and an Honorary Fellow of the Guild of Motoring Artists). 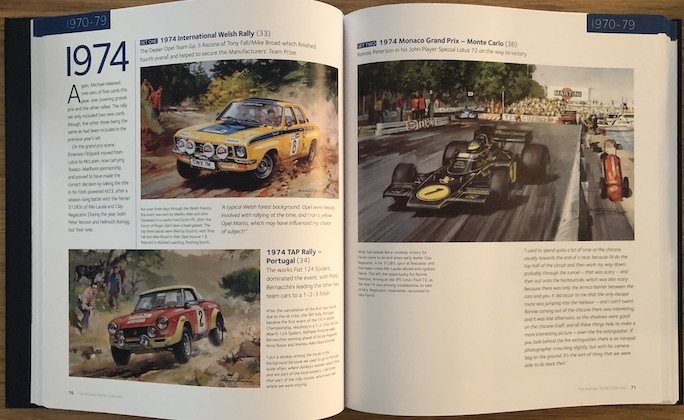 The earliest racing scene included here is from 1923 which of course predates the start of the Christmas cards with the 1960 GP season, in fact that one, as well as several other of the early years includes cards that were not part of the Christmas sets. The fine Index is subdivided into Cars, Drivers, and a short section entitled “Misc.”

At 11 x 12.75″ the book is suitably large to accommodate the card size, showing usually 3 or 4 per spread. Readers need to realize, of course, that the cards themselves are most often cropped versions of larger paintings. 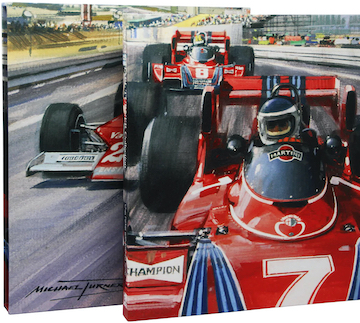 This is a Porter Press book so paper and printing are top-notch and there are special editions available: 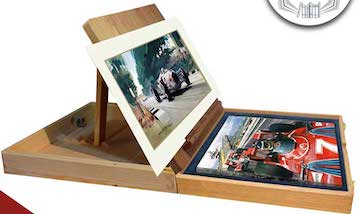 display an original Turner painting of your choice.

Even the standard edition is not exactly cheap at £70 but you could buy neither a complete set of Christmas cards nor a reproduction of a painting at the smallest size for that sort of money.

If you bought the cards to use as cards but instead kept them, don’t think you’ll be able to buy this book and part with it!