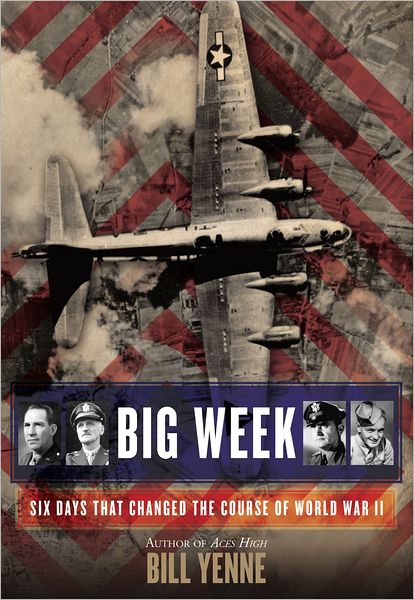 “The sky was full of airplanes that day, but they were all friendly. It was not supposed to have been that way. Once, a very short time before, Germany’s Luftwaffe had been the most powerful and effective air force in the world. Indeed, only a few months ago, Flying Fortress crews who ventured into the skies over Europe did so at considerable peril.”

“That day” refers to D-Day, the Allied landing in Normandy in June 1944. And why there was no serious German air presence over France that day, or any other day afterwards, is the topic of this book.

Yenne has published extensively on military and other subjects. Even if his ultimate topic is a specific event or circumstance, he most often surrounds the subject with a Big Picture frame of reference. If you know his books you know he is a man with a plan, and it is the reader’s loss not to follow it, as can easily happen if you read a Yenne book in short spurts rather than large chunks at a time or one uninterrupted sweep. Here, too, he threads the needle by introducing strands that are disparate in time and place and that only many, many, many pages later come together—but then are all the more powerful for having been “deployed” for maximum impact. He does write for effect and it is a skill, never mind the “just the facts!” crowd that is impatiently tapping their fingers “to get to the point.” In this instance, you’ll be halfway through the book before the focus zeroes in on the operational aspects of that one week in February 1944—Big Week.

That massive aerial campaign, made possible by specific actions in the run-up to it, did change the outcome of the war and hasten its end. As importantly, it changed warfare doctrine in a lasting manner. How military doctrine is arrived at, articulated, and then validated is fantastically complex. Yenne rightly singles out General “Billy” Mitchell who had commanded the aviation component of the American Expeditionary Force during World War I as a prime advocate for a new doctrine (read his 1925 book Winged Victory). The book can offer only a quick sketch of the utter absurdity of Mitchell being court-martialed and demoted for harshly criticizing his superiors—only to be proven right not that many years later, alas a vindication he could not enjoy because he was dead already.

Yenne examines the practical differences between tactical and strategic operations and the equipment required for either. Russian efforts in bomber development, the Treaty of Versailles, and the geopolitical landscape are discussed as are strategic goals and alliances—Big Week, after all, may have had different results if it hadn’t been for British and US air forces using, for once, the same strategy in regards to target selection, engaging the enemy, and the positioning of fighters in relation to the bombers. Due attention is drawn to the game-changing impact of the just-deployed P-51 Mustang fighter. One item that may get a bit lost among all the hoopla is that despite the massive force the Allies applied to decimating the German aircraft industry, output reached a production high that very year (not least thanks to French factories being forced since 1941 to set aside 2/3 of their output for German requirements). What kept German planes out of the sky first and foremost was that there were too few skilled pilots left to fly them and that a three-front war caused conflicting priorities.

To the reader new to or only peripherally acquainted with the subject, the book is a thorough, vivid introduction. (Do familiarize yourself first of all with the many acronyms that are spelled out at the back of the book!) In Yenne’s signature style it combines hard fact and human interest, expressed with his distinctive word-smithery (“. . . fear [that] kept them awake at night and caused chills to run up their spines and nest in the bases of their skulls like icy rodents.”)

The reader who does already know the lay of the land will wonder why the book jacket and promo blurbs (neither of which Yenne would have written) insist that Big Week is one of the “least known” or “most overlooked” episodes of WWII and that “no books on this important topic have been published in over a decade.” You have to look no farther back than 2009 to find Eric Hammel’s useful The Road to Big Week: The Struggle for Daylight Air Supremacy Over Western Europe July 1942–February 1944 (ISBN 978-0935553642) which, oddly, is not included in the otherwise wide-ranging Bibliography.

Eight pages of b/w photos are bundled in the center of the book, two maps (too small and too superficial to be of real use) precede the text, and the Index is commendably deep.

India: In My Eyes »
« A Record of Grand Prix and Voiturette Racing