Toymaker: My Journey from War to Wonder 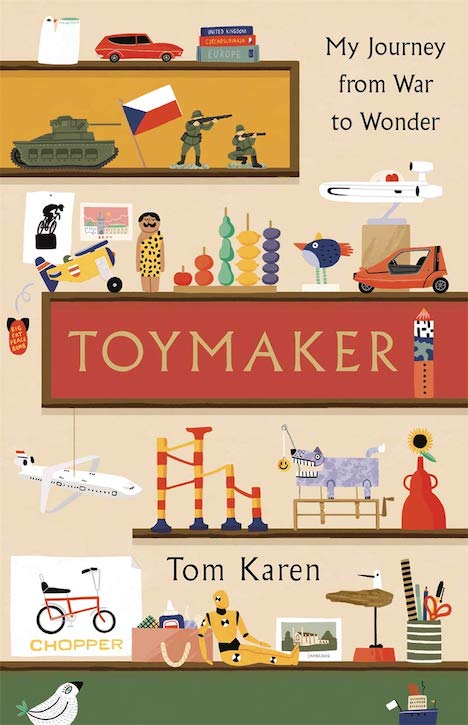 “There are no crash test dummies in my house today. Most people wouldn’t feel the need to point this out.”

If you ask any British car enthusiast about Tom Karen I can guarantee that HRH Princess Anne will be mentioned in the reply. We all know that Karen designed the Reliant Scimitar GTE, but we also know that Her Highness was caught speeding in the GTE her parents had bought for her in 1970.  Similar offenses were to follow, doubtless to the delight of the Reliant PR team. The GTE’s muscular lines and its status as the first production sports estate car are Karen’s most famous legacy but this enchanting book shows the real extent of his extraordinary creativity. 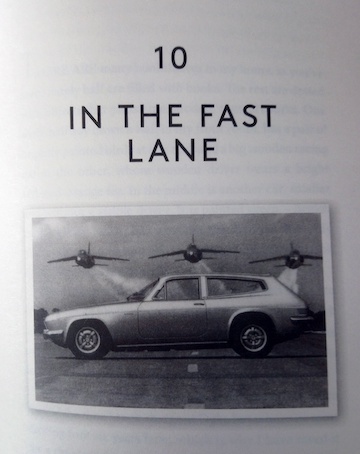 Designing a book about a designer must place unusual demands on the publisher but the look and layout of the book complement its subject’s talents. Rarely have I found a book easier to read, as the writing is as beguiling as its   appearance, and there is an intimacy which beckons the reader irresistibly into Karen’s life story. The opening words set the tone: “Ah, there you are. Come in.”

Thomas Josef Derrick Paul Karen is now 95, and the course of his life was determined by the turmoil of World War Two and the 40-year Cold War that succeeded it. He had been born in Vienna to a wealthy and Bohemian Czech family, and his flight from the Nazis led to his arrival in Britain, as an almost penniless refugee in 1942. Despite his gilded surroundings his early childhood had been dysfunctional, and Karen describes it, hauntingly, as “Rich in luxury, impoverished in affection … we had no friends.” But this lost boy had been blessed with an extraordinary creativity, and his legacy is the incredible diversity of objects he has designed. There is a deftness of touch, a twinkle of an eye and a playful humor in evidence in all of his creations. As he puts it himself, “Perhaps I have an inner child whose interest in childish things—such as toys and play—has informed my adult work.” 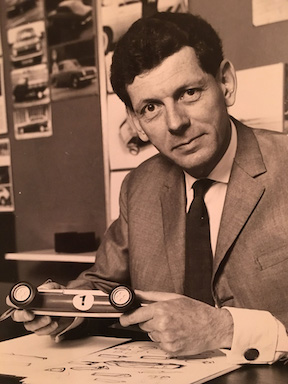 Like his compatriot, the playwright Tom Stoppard, Karen was able to exploit the opportunities which the postwar zeitgeist enabled. Britain has been enduring a national identity crisis in the 21st century, with an unhealthy inclination towards nostalgia and mawkishness. But the movers and shakers in the arts, fashion and industry of Sixties Britain  had  their eyes focussed only on the future, the next big thing, and their ambition was fueled by what Prime Minister Harold Wilson had called “the white heat of technology.” The decade that starred the Mini Cooper, the mini skirt, Monty Python and the Beatles offered almost limitless opportunity to the creative mind. Hence Tom Karen was the right man in the right place and at precisely the right time to create his own disruption to the establishment. 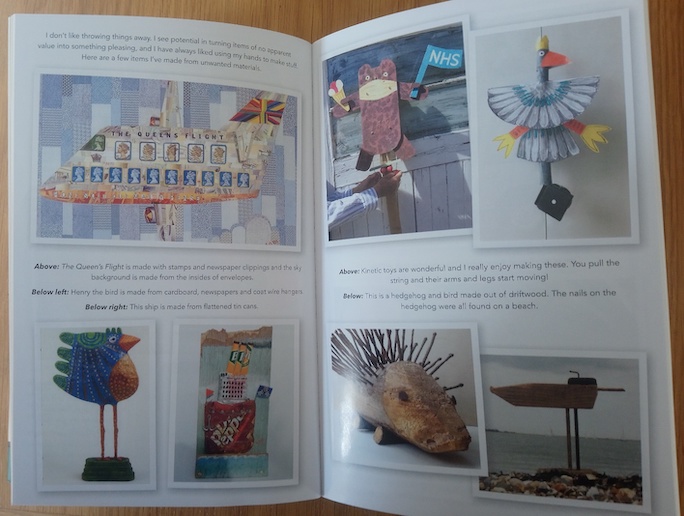 Tom Karen had worked on the outer periphery of draughtsmanship in his early career with the Air Registration Board but his big break came when he was recruited by Ford to work in its design studio, where he flourished – “I loved the atmosphere. Nobody taught you. You learned by watching what other people did – and they were a strange bunch of people.” But Karen’s work for Ford was small scale stuff in every sense – such as redesigning the lettering on an Anglia badge – and it was his first move to Ogle in 1959 which gave him the opportunities his talent deserved.

It is Karen’s productivity, his work ethic and the diversity of subject matter of his designs which made the deepest impression upon me. There was hardly an area of everyday life in which a Karen design might not be encountered in the Sixties—from domestic appliances to transistor radios, and from furniture to motorcars. And yes, crash test dummies.  David Ogle had died in 1962, en route to Brands Hatch in an Ogle Mini, and Tom Karen had been tempted back to the company, after working for Hotpoint Appliances and Philips, when offered the post of Chief Designer and Managing Director. He was to remain with Ogle until his retirement, at the age of 73 in 1999, and he bequeathed a legacy of work that can have few rivals in the UK. 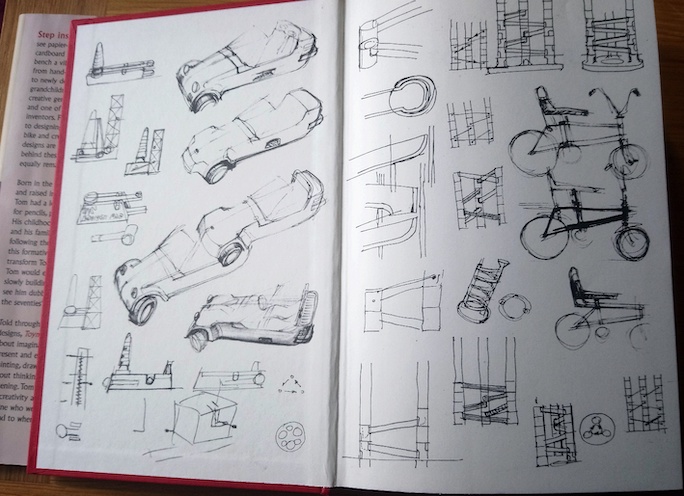 The Reliant Scimitar GTE, the Raleigh Chopper bicycle and the Bond Bug three-wheeler are perhaps the best known examples of Karen’s designs. It is easy to understand why he came to be known as “the man who designed the Seventies.” But the trademark Karen look had its roots in a much earlier work, an Electrolux vacuum cleaner that had large rear wheels to convey “the idea of power coming from the back.” The Scimitar’s rising waistline developed that theme by “creating a sense of powerful rear thrust.” As Karen puts it, “. . . these days, it is almost impossible to think of a car that doesn’t have a rising waistline.” The Chopper was the bike inspired by the US Schwinn Sting-Ray (which, in turn, aped the West Coast chopper motor bike look) and it enjoyed huge success in Seventies Britain, despite, or perhaps because “its key features didn’t arise from function . . . it was all about perception.”

As for the Bond Bug, it may never have been a big seller but its futuristic wedge shape and bright orange paintwork epitomized the brashness and innate good humor of early Seventies Britain. Karen’s dream “was to make a fun vehicle I could imagine driving as a child.” Like every other three-wheeler of its configuration the Bug was a pretty awful car, and the fact that it has remained a part of the national consciousness possibly merits a thesis of its own.

Tom Karen turns out to be the man who makes us want to smile, as his work combines a deep sense of humanity with an endearing, child-like playfulness. Much car design emphasizes the potency of the machine, and I would cite in evidence the absurdly priapic hood of the Jaguar XKE and the scowling, steroidal mien of any AMG Mercedes. However, the body language of Karen’s products was in diametric opposition to such macho posturing. His Leyland T45 truck and second-generation Renault Trafic van both highlighted the importance of the driver by the simple expedient of making them more visible. He was ideally placed, therefore, to have been tasked with the design of the British Leyland Popemobile for Pope John Paul II’s visit to Britain in 1982.

Tom Karen’s wonderful career was partly at the expense of his marriage; he was already mired in doubt before he married Nicole and, although their four children had kept them together, their incompatibility resulted in divorce in 1994. During what passes for retirement in Tom Karen’s world, his creativity has been given even freer rein, with a blizzard of images, products and ideas still flowing from his Cambridge home. From toys to aeroplane concepts—even floating cities—Tom Karen’s mind is as hyperactive now as it ever was. And this reader found it impossible not to love him for that.

I adored this book, and I found that I was smiling to myself on nearly every page. It is beautifully written and the many illustrations complement the text perfectly. Prompted by the author’s insights into his designs, I found myself returning to the pictures again and again, noticing new points of detail every time. I have only one criticism: this book would really benefit from an Index.

Toymaker: My Journey from War to Wonder

Posted Under: Art, Artists and Design, Other Genres | Author: John Aston | No comments yet

Developing A Champion, The Electramotive NISSAN GTP Story »
« The Racers