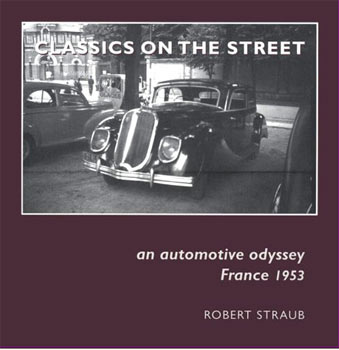 Not often does a new book come along that presents an entirely new complement of never-before seen photos of classic grand touring cars of the 1930s. And not just photos of gleaming cars on museum pedestals but rather period photos of cars out and about in the wild. These are snapshots, in the best sense of the word, shot from the hip, out of moving cars, at street corners, for no other reason than to entertain the photographer.

Luckily, enough people who happened to be shown the material persuaded the author to publish them—it only took 30 years for it to happen. One of the book’s “patron saints” has a name surely familiar to classic car enthusiasts: Michael Sedgwick.

Bob Straub, an American, spent 1953 in France studying at the Ecole des Beaux Arts. Armed with his trusty Kodak he would roam the streets looking for his boyhood car fantasies. The extensively captioned photos reveal Straub’s interest in design aspects. Who could have foreseen that within a decade of taking his photos, many of these cars would disappear from public life—relegated by the prohibitive taxation of the 1960s in France to undignified retirement in barns, garages, fields, or worse, the scrapyard.

Bob Straub would go on to join General Motors Styling and become an engineer. At GM, he says, his albums were often consulted “for fun and inspiration.”

Former GM colleague Karl Ludvigsen’s excellent foreword and Straub’s insightful observations about the state of car design while he was growing up and his subsequent journey into industrial design are rich in detail. Text and photos illustrate yet again that “everything is connected”—if one is inclined to look. Each car photo has an accompanying page with a short caption and description of the car (sometimes vague; understandably since some of these photos were drive-bys and, at any rate, were not taken with posterity in mind).

This book deserves to be picked up time and time again in idle moments; pity that no hardcover option is available. The paper is so good and heavy that the book just flops around too much. Aside from the cover, it is obvious from design, layout, and typography (our old friend Gill Sans and Gill’s less often seen Joanna) that publisher William Bauhan has paid attention to the details in a most satisfying manner.

Fairey Flycatcher »
« Concorde: The Rise and Fall of the Supersonic Airliner