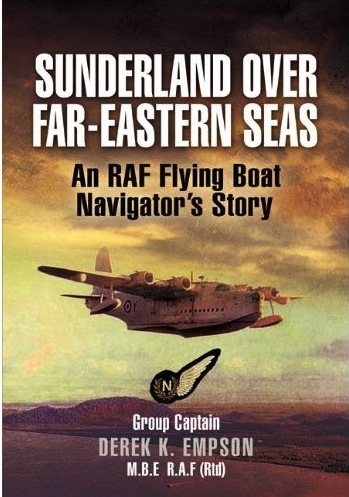 This autobiography is the first account of post-World War Two operations conducted by Sunderland flying boats assigned to the British RAF’s Far East Air Force Flying Boat Wing (FEFBW). In 1952, when he begins his story, Empson was 21 and a newly minted RAF navigator on his first tour of duty with just 450 flying hours under his belt. He recounts the 300 sorties over 30 months he flew as part of a 10-man crew out of Singapore, Hong Kong, Japan and some smaller Far Eastern bases; they would add another 1500 flight hours and a quarter million miles to his resume.

Sunderlands, one of several seaplanes developed by Short Brothers, had been flying since 1937 and acquitted themselves well in a variety of roles. Quite a bit has been published about their World War Two Atlantic and later NATO service but their postwar role in the Far East had not yet been recorded, probably because Britain at that time was preoccupied with problems closer to home and reluctant to commit resources to far-flung locales.

Partly it was the 50th anniversary of the Sunderland’s withdrawal from service in 2009 that prompted Empson to finally put pen to paper, partly his intent to communicate to other flyers and anyone else who cares just what is so special about “being on boats.” Air Vice-Marshal G A Chesworth, who was a Flying Officer himself at that time and in that place and in fact was once Empson’s aircraft captain on a 15,5000-nautical mile Singapore–UK roundtrip, shares that sentiment. In his Foreword he describes being a boatman as “not just a job but a way of life.”

Empson describes the day-to-day operations as well as crew, equipment, procedures, and operational conditions from his vantage point as navigator. In other words he knows full well that his narrative does not, cannot capture the totality of flight operations. However, already in 1953 he had become aircraft captain (not to be confused with pilot) which broadens his frame of reference and allows him to relate, for instance, the pilot’s actions during specific maneuvers in good detail. Moreover, Empson would go on to become Group Captain and NATO HQ staff officer which surely adds depth to his descriptions. His recollections are based on his own logbook and memory as well as interviews with other service personnel. The reader with an interest in foreign cultures or the interactions between various nations’ services (here specifically the French, US, and Australian) will also find useful detail here.

Unless you already know your way around a Sunderland you will probably want to start with Appendix 4. It is a photographic tour of the first Mk V (ML796), now in the care of the Imperial War Museum. This was the last of the marks (there was no Mk IV) and mostly similar to Empson’s craft. Seeing the various pieces of kit and stations, and understanding where they are in the plane and what they do will be useful for following Empson’s tales of search and rescue missions, ferry flights, bombing runs over the Malayan jungle, Korean War ops, and VIP duty. A cutaway or similar drawing of the double-decker plane would have been useful! One of the things he is keen on impressing upon the reader is that seaplane ops require an entirely different level of self-sufficiency and teamwork than landplane crews are used to. Due to the flying boat’s construction and function a boatman has to be sailor as much as airman, and, often operating far from support structures has to be able to help himself and do any number of other crewmember’s jobs.

Many chapters have notes. Except for Appendix 4 and a few maps all photos are b/w. Most are small, most are clear, and all give a good impression of the plane, life on board, and the locations. There are several cartoons by an FEFBW engine fitter. In addition to the aforementioned tour of ML796 the Appendices contain several other highly useful items: a statistical analysis of a flying boat tour, Mk V operating and technical data, and dead-reckoning techniques (explained in a way specifically geared toward the lay reader) used in the 1950s. There are also a Glossary and an Index.