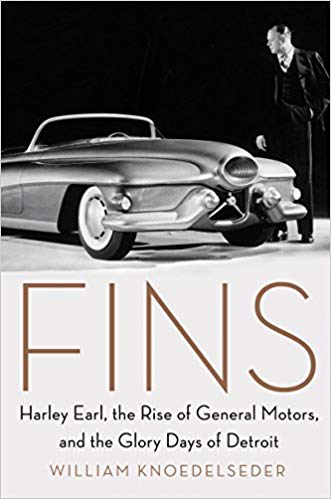 This particular book is a combination of an automotive history and a nicely written biography of, as the subtitle suggests, a pivotal individual within the auto industry.

Those who are already well familiar with GM or design and styling history will find little new between the covers so reading Fins will be more of a memory refresher. For those seeking to learn of this time period and the people, it’s a fine introduction quite simply because the author’s sources and resource materials are also well-known to, and respected by, most automotive historians and that saved William Knoedelseder from making any grievous errors.

Your commentator, having never read any of Knoedelseder’s previous books, has been pleasantly surprised to find his writing clear and straightforward with none of the hyperbole or over-dramatization the publisher’s marketers resorted to in their promo materials for this book. The events of that time in history are filled with enough drama of their own, no exaggeration needed.

Consider: GM was “the top industrial contributor to the war effort…manufacturing 2,300 different items for the military…in numbers that were astonishing—119,522,000 artillery shells, 1,900,000 machine guns, 3,142,000 carbines, 206,000 aircraft engines, 854,000 trucks, 190,000 cannons, 85,000 tanks” thus positioning itself to be preeminent postwar with, in addition to its US plants and properties, additional“manufacturing assets in Great Britain and Germany.”

Harley Earl was a large man at 6’5″ with an equally large personality yet little known as a designer outside his native Southern California until invited to come to Detroit the summer of 1926. Yet by 1940, as Knoedelseder writes, “[Harley Earl’s] name was starting to be mentioned in the same breath as Raymond Loewy and Norman Bel Geddes”.

An aside, Loewy’s life and career was chronicled in another book also published in 2018 and reviewed on this site. See Streamliner by John Wall.

On balance those first two decades after World War II were propitious times for General Motors and Harley’s flamboyance and design tastes were right for the times and his employer. Essentially Earl created a styling staff with design procedures and protocols that over time would be emulated by every automobile manufacturer, large or small. With Harley at the styling helm, Boss Kettering advancing the technology and Alfred Sloan guiding the business affairs, GM seemed able to overcome every obstacle or challenge—and produce cars which buyers indicated their approval of in dollars—all of which is narrated in the middle chapters.

As the 1950s drew to a close, Detroit was thought of as the manufacturing center of the world and GM was considered the most successful company in history. But at the same time Harley’s styling principles were not changing with the times. Knoedelseder writes, “[His styling] Rule Number One was never disagree with him. Rule Number Two was there’s no such thing as too much chrome. The more chrome it has the more expensive it looks.” And this brings us to by far the most interesting and thought provoking concluding two chapters.

Earl’s reputation and influence is indeed considerable but as he nears mandatory retirement age his methods and perceptions of good design seemed, and were, outmoded and passé. Designer Raymond Loewy wrote a piece the Atlantic magazine published in its April 1955 issue and is referred to and cited by Knoedelseder.

Your commentator found that article on Atlantic’s website. Although Loewy doesn’t mention Earl by name (nor his own MAYA philosophy—Most Advanced Yet Acceptable—either by name or its acronym) there’s nary a doubt to whom his very to-the-point words are directed. And he adds too that the buying public had itself learned that hanging all that chrome on a car doesn’t make a better car nor is it good, simple, aerodynamic styling.

The concluding paragraphs follow the Earls, Harley and wife Sue, into retirement until their respective deaths; Harley in 1969, Sue in 1988. Overall, as said at the outset, this book is a very readable refresher course for some and a good introductory overview for those not familiar with and seeking to learn of Harley Earl, the Rise of General Motors, and the Glory Days of Detroit.