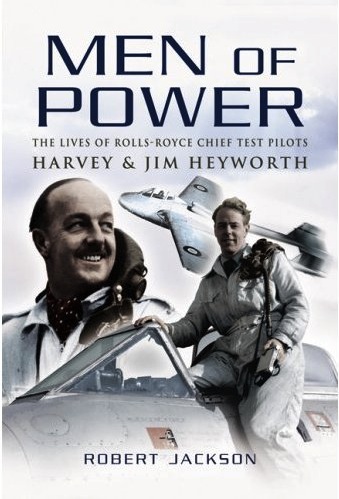 Test pilot brothers are a rarity, the reviewer knowing only of two: Belper-born Harvey and Jim Heyworth. They both worked for the same company, at the same time, and both became chief test pilot. Harvey, the elder of the two became the third test pilot at Hucknall, where Rolls-Royce had its flight test establishment, in 1936 following service in the Royal Air Force. At the outbreak of war he returned to the service and became a squadron leader in command of a fighter squadron during the Battle of Britain. In the summer of 1941 he was seconded back to Hucknall.

Jim was a bomber pilot, flying Wellingtons and Lancasters. In 1944 he was seconded to Hucknall, where he joined his brother. These were exciting times for a pilot. The Merlin was giving 2000 hp and pushing the Mustang to 450 mph, and jet propulsion was getting into its stride with the Meteor. At the end of the war Jim stayed with Rolls-Royce and following in his brother’s footsteps eventually became chief test pilot.

Jackson has successfully melded the story of the Heyworth brothers flying careers into a nicely readable account. There is a fair amount of “padding” not directly associated with their careers, but for those not familiar with the background to aviation developments during the war and postwar years this will add to their knowledge and understanding. Although there are some errors in the book they do not spoil what is a good read. The story takes the reader through the inter-war period with Harvey flying Siskins and Bulldogs, and then to 504 Squadron at Hucknall flying Westland Wallaces, where he would associate with Ronnie Harker, test pilot with the next-door neighbor Rolls-Royce. Moving around the corner he became associated with the early flight development of the Merlin engine until his recall to the RAF with war imminent. Upon his release and back at Hucknall he flew everything with a propeller and became heavily involved in flying jets. So much so that by 1948 he had racked up 1000 hours jet experience, more than anyone else in the world. For this and his contribution to test flying, he became the first recipient of the Derry and Richards Memorial Medal in 1954, the year he retired from test flying.

Jim mirrored his brother’s career at Hucknall—pistons, jets and turboprops—and continued into the swept-wing, supersonic era, ending with a concentrated flying program with the Conway Vulcan. Both brothers gave sparkling demonstrations at the Farnborough air shows; Harvey climbing almost vertically in the Canberra and Jim pulling up sharp in the thrust-reverse Hunter are well remembered. Jim’s flying career came to an end in 1962 after which he took on managerial roles at Derby. Today he lives a quiet life in Devon with Joy, his wife of 66 years.

For once, the photos are interspersed with the text where they belong instead of being bundled in separate sections. Appended are an alphabetical list of aircraft flown by the brothers, a simplified chronology of early turbojet development 1929–1946 by Ian Whittle (son of Air Commodore Sir Frank Whittle, a seminal figure in the field of jet propulsion), and a history of Hucknall 1935–1944. Bibilography, Index.

The author is a former pilot and navigation instructor and attained the rank of squadron leader in the RAF Volunteer Reserve. He is a prolific lecturer on science and military subjects and has written with over 80 non-fiction books and been the defense and science correspondent for British newspapers

Copyright 2010, Dave Birch (speedreaders.info)
(Birch worked many years for Rolls-Royce and knew Jim Heyworth. He is an expert on Hucknall and working on his own book about it. For many years he was the Historical Editor of the Rolls-Royce Heritage Trust magazine Archive.)