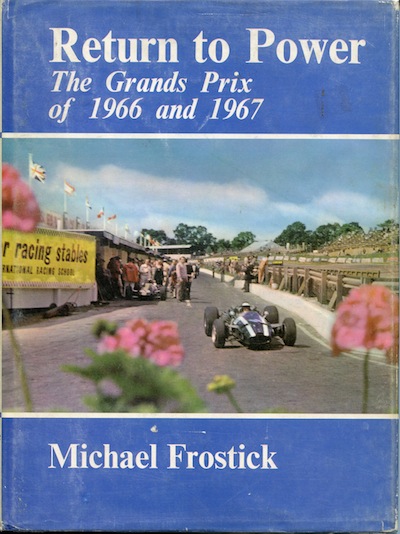 There are those times when you are looking for a particular book on your bookshelves and find your attention drawn to one that you had largely forgotten about. Whether the reason was because it’s not a particularly memorable or helpful book is irrelevant. The fact that it is still there at all, having survived the inevitable occasional culling exercises, means that at some point it had to have had some purpose. Either that, or it simply got lucky.

The question that entered my mind as I read Frostick’s Return to Power was, “What were they thinking?” Certainly, the advent of the new three-liter Formula 1 during the 1966 season was reason enough to write a book on its first two seasons. After the five seasons of the Twiddler Formula, it was great to see the engine size doubled and real power make a return to Grand Prix racing. Racing fans were overjoyed at the prospect of racing becoming a bit more brutal and hairy, a lot less refined and precise.

The problem with Return to Power was that while it did a credible job covering the races in the 1966 world championship, by comparison the 1967 season was scarcely touched. Indeed, the last several events on the 1967 championship calendar were either barely covered or not written about at all!

Had the book covered only the 1966 season, taking a bit more time and giving more attention to the events and the other aspects of the racing season—such as the non-championship races—this would have been a very good book to have on the shelf. Instead, one is left with a book that is a mere shell of what could have been. It is as if the author and the publisher lost interest and then realized that they had to put something in the bookstores. The result? A true mess.

The mystery for me was just how did this dud of a book manage to survive not only several cullings of my materials, but several disasters that destroyed many very worthy (and very expensive to replace) books? As it turned out, this copy is a replacement of the original which was purchased many years ago in a bookstore in New York, not long after it came out in early 1968. This copy was apparently picked up, cheap, many years ago and kept for the photographs, which, for the 1966 season at least, tend to be very good and often quite interesting.

That said, were I to encounter the book today, it is safe to say that I would certainly have few qualms to leave it for someone else to purchase.

Hot Rod Dreams: Car Shows and Culture »
« XKD 603 Through the Lens of Time