Poetry in Motion: An Autobiography of a Supreme Grand Prix Driver 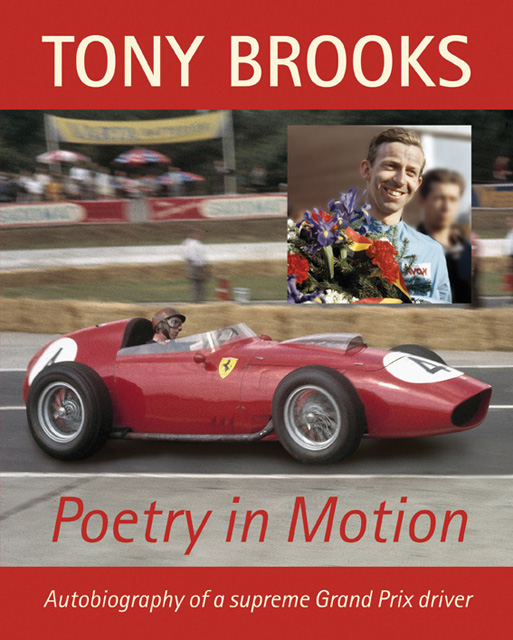 Tony Brooks, probably the best driver that people don’t know about in the world. If I was going to have a team I would put Tony Brooks at number one, with Jim Clark alongside him. Tony was that good. He was careful with the car—and very, very fast.

With such praise by such a peer, imagine the incongruity of a man so respected being able to stroll through the paddock of the 2008 Grand Prix de Monaco Historique in relative anonymity. Except for his colleagues at the meeting of the Club International des Anciens Pilotes De Grand Prix F1, nary a soul seemed to note his presence. While Moss was virtually mobbed each and every time he sat foot in the paddock that weekend, Brooks, fit as ever as ever and dapper in his blue blazer and his lovely wife Pina by his side, scarcely attracted even a nod even from the anciens in the crowd, the ones who surely ought to remember that in his day Brooks was one of the few considered as being even close to Moss on the track when it came to sheer driving ability.

There is probably no literary genre as fraught with peril for both author and reader than autobiography and biography. For some reason, this seems to be especially true in the case of motor racing subjects. For every motor racing auto/biography that is well-written and deemed worth reading there are an untold number of others that make one wonder just how they got into print. Most of the latter are obviously well-meant, well-intended, and often true labors of love—except that love of subject does not necessarily translate to writing ability, leading to a case of hagiography compounded by dreadful prose, or simply dreadful prose.

Not so here. When a biography or autobiography is “right” it can be a joy to read and the experience a memorable one. Even after several rereadings, I still find Archie and the Listers: The Heroic Story of Archie Scott Brown and the Racing Marque He Made Famous by Robert Edwards (Patrick Stephens, 1995) as good as it was on that first reading. On the other hand, while there a several other books that come close to matching Edwards’, there is not enough money in the world to force me to reread some of those lesser racing auto/biographies gathering dust on my bookshelves. Having suffered once through page after page of the pain and agony wrought by those well-meaning but too often sophomoric authors is enough.

In some cases, though, the problem may not be the writer but the subject, or the presentation, or even the timing, or possibly even the reader. In the latter case, I still recall after all these years a scathing review of the autobiography of George Eaton in Road & Track some many decades ago that centered on the notion (paraphrased) of, “Whatever has this nobody ever done to warrant a book?”

Which brings us to the long-awaited autobiography of one of the quartet of British drivers who played a major role in the Albion Triumphant saga in the mid and late 1950s: Charles Anthony Standish “Tony” Brooks. His contemporaries—Moss, Mike Hawthorn, Peter Collins—have all had their moments in the literary world, with Moss being, of course, the subject of a great many pages of attention. Although somewhat late to the racing game and the only one of the quartet to leave on pretty much his own terms, Brooks in the minds of many had long faded into relative obscurity.

As Brooks makes clear in the introduction, he had been pestered for years by both family and friends to write a memoir recording his years on the racing circuit. In many ways, it was a fairly short racing career, Brooks not participating in his first race until March 1952 in a club event at Goodwood and his last coming in October 1961 at Watkins Glen in the United States Grand Prix. He did not sit in a Grand Prix car until late October 1955, a Connaught B Type, in which he was entered in the Gran Premio di Siracusa (which, incidentally, he won).

While the approach Brooks takes to his time on the track is quite conventional, a chronological march through his career, it seems to be the correct way present this material. What one finds is someone who ended up in the top ranks of European motor racing almost literally out of the blue. That a dental student having to deal with his examinations and residency somehow managed to climb into the ranks of the leading drivers of the day is not only well-told, but told well.

Brooks provides various insights and thoughts concerning his time in racing that bring home just how different the sport of automobile racing is today from what it was during the time that Brooks was in the midst of it. Brooks is not afraid to offer opinions about racing—and racers—then and today. The comments that Brooks has regarding Moss are often those that few might utter aloud, yet there is little doubt that Brooks has great respect for Moss.

The years at Vanwall and Aston Martin make interesting reading, often filling in some of the gaps one might have regarding their activities, but it might take many by surprise that Brooks considers his favorite year racing the one he spent with Scuderia Ferrari. It is clear that Brooks genuinely enjoyed the season with Ferrari, but also makes it clear that leaving the team was his idea. As for his worst season in racing, Brooks makes it very clear as to why it was 1961 that has that dubious distinction.

So, was it worth the long, long wait for Tony Brooks to provide us with an autobiography? In a word, Yes!

This an excellent book and one that is profusely illustrated with more than a few photographs, many from the Brooks family archives, that will be new to even those who have been around for a few years.

As someone who nodded to Tony and Pina in the paddock that day and said, “Hello, Tony, Pina, wonderful to see you today,” it was a delight to see the surprise on his face and then be offered a quick handshake and a smile as they made their way inside to the luncheon.

After they went inside, someone near me asked, “Who was that?”

Poetry in Motion: An Autobiography of a Supreme Grand Prix Driver

The Jordan Automobile, A History »
« Austerity Motoring, From Armistice Until the Mid-Fifties