Essential Specifications of 4,000+ Gasoline Powered Passenger Cars, 1906–1915, with a Statistical and Historical Overview 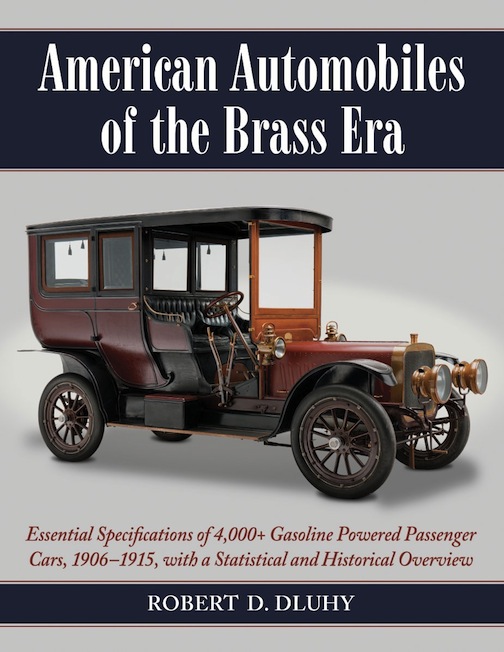 “Early automobile development in America could be characterized as frenzied. Seemingly everyone thought they could build a car and get rich doing it. The result, as demonstrated by the data presented in this book, is that the period produced many more types of automobiles and companies than one might expect.”

The subtitle is so long and precise that it is easy to overlook a key word in the main title: American. No foreign cars (and no steam or electric cars), and commercial vehicles (taxies, trucks etc.) only if they had a pleasure-use application.

Who’d have thunk that more than 4000 such vehicles from over 830 makers existed in this short, fertile trial-and-error phase of automobility? And who’d have thunk that heretofore no one-stop simple-to-use comparative compendium existed? (The Standard Catalog of American Cars 1805–1942, ISBN 978-0873414289, is only vaguely similar but certainly a good companion.)

Of the 200-odd pages in this book 150 are devoted to two enormous lists, one by manufacturer and one by year. The essential data they offer are cylinders, bore, stroke, displacement, horsepower, wheelbase, steering, price, tire size, and weight. Absolutely, critically important—but only to those with supremely specialized interests. The first 50 pages, however, are useful to anyone seeking an overall understanding of the early car both in technical and societal terms because the author offers a quantitative and qualitative analysis of the raw data in the latter part of the book.

Dluhy is a longtime enthusiast of Brass and Classic Era cars. He’s also a retired electrical engineer which is probably why sees the value of flowcharts. Early on he provides one that illustrates the yes/no, if/then decision tree that guided his way through the maze of often divergent contemporary sources. And a few pages later there is a pro/con comparison of 11 of the major primary sources. To the researcher who retraces Dluhy’s steps this is very useful guidance but really anyone who deals with collecting and purging data or is simply curious about how the snowball grows will find this interesting. Even if you have no interest in cars as transportation, the analysis of retail pricing reveals much about developments within a society—as does the not unrelated rise and fall of manufacturers.

This is a book for the studious type who does not shy away from text and tables. Not counting graphs, the cover photo is the only illustration here! Dluhy is apparently too polite to show his own 1913 Hudson Model 37 Torpedo (quite a pretty car; if you like old movies catch an old 6-minute Charlie Chaplin movie, A Busy Day (1914)) and instead uses the 1908 Stevens-Duryea from The Henry Ford.

Dluhy also explains the connection between the Selden Patent and the Association of Licensed Automobile Manufacturers (ALAM), a bit of an unsavory chapter in American industrial history and emblematic of that fine line between greed and ingenuity.

As this book has fundamentally a comparative (i.e apples to apples) purpose the age-old question how horsepower is computed (actual measured output vs. a mathematical formula considering bore and cylinders) is of no practical consequence.

That both this one and The Standard Catalog are softcovers is in each case typical for the publisher but seems rather misguided because they are go-to reference books that will see a lot of use.

Essential Specifications of 4,000+ Gasoline Powered Passenger Cars, 1906-1915, with a Statistical and Historical Overview

Posted Under: Automobiles, Award Winner, US | Author: Charly Baumann | No comments yet