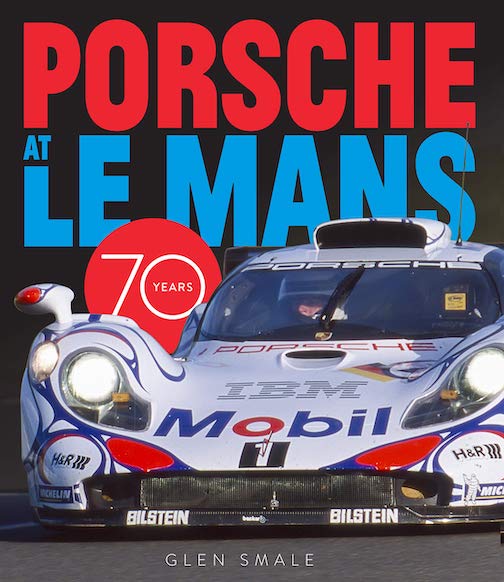 “For Porsche, though, running a factory team at Le Mans signaled the start of their long-term plans—ultimate success in the 24 Hours of Le Mans—which was a goal that they took very seriously. There was little money for any promotional campaign, so a strong finish for the Stuttgart team was vital to justify the expense.”

The Le Mans 24 Hour race will celebrate its centenery in 2023, and the Automobile Club de l’Ouest already kicked the party off in 2022 with special events at the Pebble Beach Concours and at Goodwood. You can bet that Porsches will feature strongly because the marque has been on the starting grid continuously since those first three Porsche 356 SLs entered in 1951. This book came out in 2021, hence the title—70 Years. You may already have the author’s 60 Year book (a finalist at the 2012 British Motorsports book awards and no longer cheap these days) on the shelf, in which case you know what to expect. 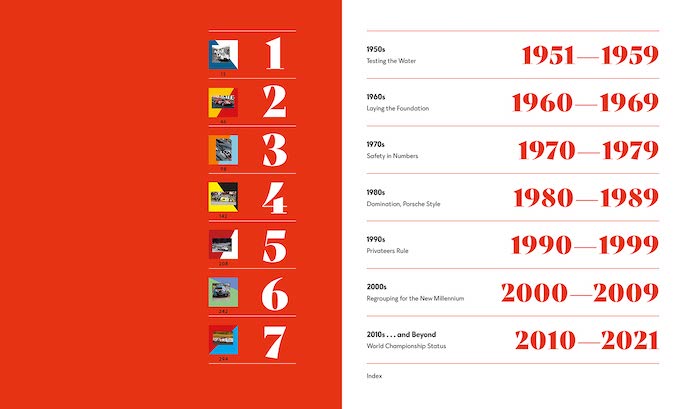 This spread and the one below show how nicely designed the book is.

This UK motoring journalist has covered Le Mans numerous times, has written a long list of very good Porsche books, and maintains a Porsche-specific website. The fact that he is a writer who is a reader first is always in evidence, making his own books clear, fully functional, and engaging. That there is no Foreword or Introduction will trouble only those who consider the book jacket mere decoration (or lose it down the road) because it gives a decent enough account of what to expect of the book. Still, someone not familiar with the marque may not appreciate until they’re already deep into the book just how remarkable and unusual Porsche’s dominance at Le Mans really is, not just in terms of pocketing more outright victories than any other marque (19 so far, of wich 7 in consecutive years) but also the demoralizing effect on the competition having to see one Porsche after another cross the finish line before anyone else—10 cars in 1986, 8 the year before. That it took Porsche 19 years to win the race outright, well, that is the real story around which this book revolves—and that fact also underscores that this book is not a mindless cheerleading exercise looking only at the successes. 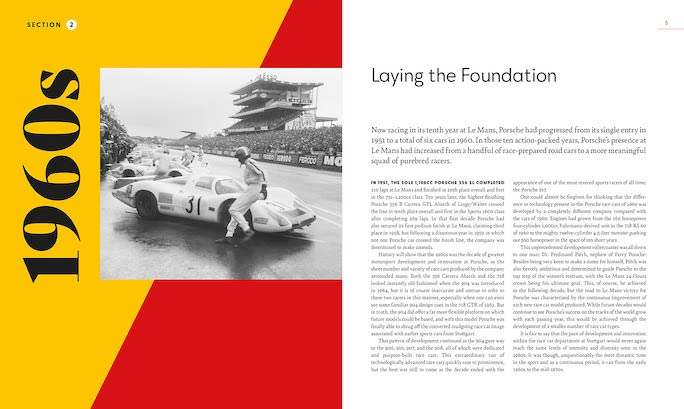 The book is divided into 10-year segments, beginning with the 1950s and describing each racing season individually and with quite detailed references to/explanations of the ever-changing ACO regulations; and ending with race results in tabular form. Each decade is introduced with some overarching narrative to set the scene, the first one reaching a bit farther back to establish Porsche’s place in the emerging postwar automotive landscape. The thrust of the book is on the grand historical motorsports sweep, not on any deep technical minutia about particular models. Plenty of other books cover that already anyway. The book does include quite a number of sidebars that flesh out additional items of interest/relevance. 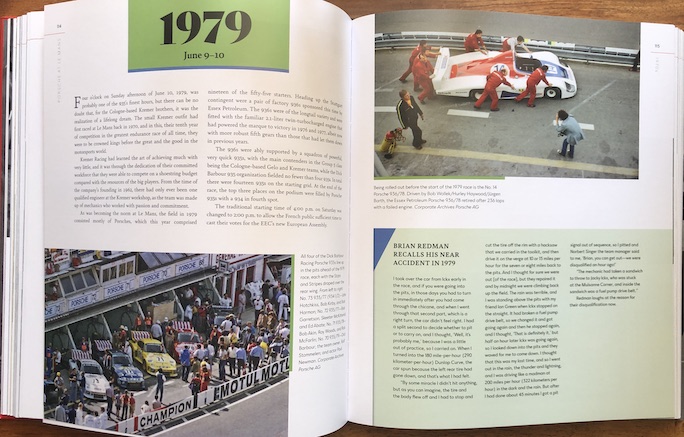 An example of the sidebars.

Porsche is big on road cars and the attentive reader will find here many instances of everyday tech (cf. awd, PDK) having been birthed on the race cars. Another trail of bread crumbs you’ll  find, if you even think of looking for it, is the dynamic between the automaker and privateer teams especially if works teams are in play.

Photographically the book is very strong, with hundreds of the over 500 images provided by Porsche. All are captioned in uncommon detail, some going so far as to include information that an earlier photo had already disclosed but that makes it supremely easy for the reader who does not go page by page/left to right/top to bottom to grasp a situation at a glance.

It’s one thing to look at the Index and then go to the page to which it sends you; it’s another to work the other way ‘round, meaning to check if what’s on a page is also in the Index, which you would of course only do to stress-test an Index. Stickler alert—not every occurrence or every thing/person is. It does not happen often, and in most cases it pertains to peripheral matters but omitting, say, one driver on a team of four raises the inevitable question if it was by choice or an oversight. In a book full or proper names, one thing that is commendably and consistently correct is the spelling of proper names (umlauts, accents). 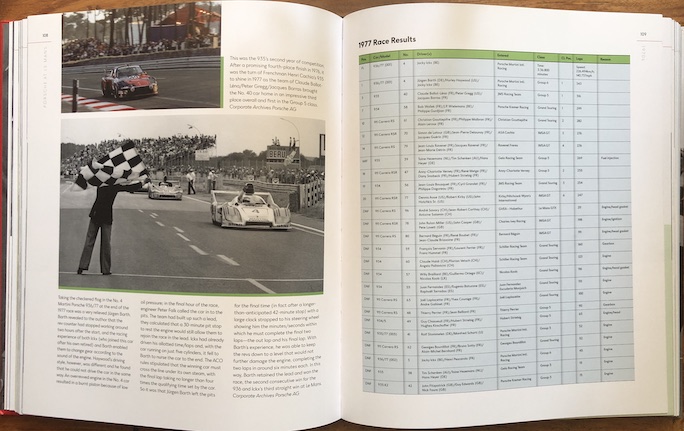 An example of a results table. There is no legend for the abbreviations so the first one may take a moment to figure out. There is also an example of a missing Index entry here: Dany Snobeck, in 18th place, in car 47. This French driver is hardly a minor figure, having won the Championnat de France des rallyes 9 times, running various motorsports outfits, even managing a race course. More importantly, he is in his seventies but still active so he’ll be miffed that no one would know he’s in this book unless they read this one table.

As we said at the beginning of the review, Smale writes a book the way he would read it, or, more importantly, use it, which goes far beyond what the casual reader expects of a book.