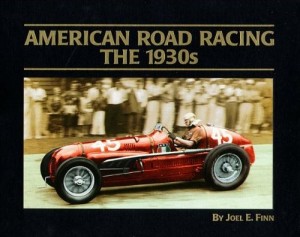 Joel Finn has produced an epic work with this brilliantly written coffee table book. It is, however, even more remarkable for its exhaustive research.

The book covers the rebirth of American road racing which had become dormant after the early years of the twentieth century. American automobile racing was oval track racing sanctioned by the AAA. It was the domain of professional (paid) drivers in single-purpose racing cars. ARCA, the Automobile Racing Club of America, was created to bring European-style road racing to America. It was formed by amateurs who, at its inception, were mostly college students from Yale and Harvard.   Finn traces the birth, or rebirth, of road racing in the 1930s which for the most part were Depression years. The book contains programs, ticket stubs, race results, personal letters, entry lists, and many more examples of original automobilia. He has accumulated an unbelievable collection of original material from the period. It is difficult to imagine that the newest material is now seventy years old.

The book is packed with photographs of the cars and relevant people. The photographs are of much higher quality and in greater numbers than one would expect to have survived from the period.

The primary decade the book covers, the 1930s, represents a remarkable advance in road racing. In the early 1930s racing primarily was conducted on very short dirt tracks on Overlook, the Collier estate in New York. Some of the cars were primitive go-kart types of vehicles. The period ends with the advent of World War Two. The races, for the most part, were on paved roads or courses, and the vehicles in some cases were Grand Prix Bugattis, Alfa Romeos, and Maseratis. Some of the ARCA cars, the Scrambling Egg, the old Grey Mare, the Amilcar-Ford still are being raced in the Vintage Sports Car Club of America. The Mount Washington Hill Climb founded by ARCA was, until last year, a VSCCA event.

If the book were nothing more than a history of road racing in the 1930s, it would be a good read. Finn goes a step further by bringing the relevant characters to life. Through the personal letters and accounts of the day, we gain an insight into the character and personalities of the individuals who brought road racing to America.

Copyright 2010, Stu Forer (speedreaders.info).
The reviewer is a vintage racer himself (these days a 1951 Jaguar XK120) and a contributor to the Motorsport Marketing Resources website where this review first appeared.

Posted Under: Automobiles, History, Racing, Rally | Author: Other | No comments yet

Engine Revolutions: The Autobiography of Max Bentele »
« The Royal Air Force at Home: The History of RAF Air Displays from 1920