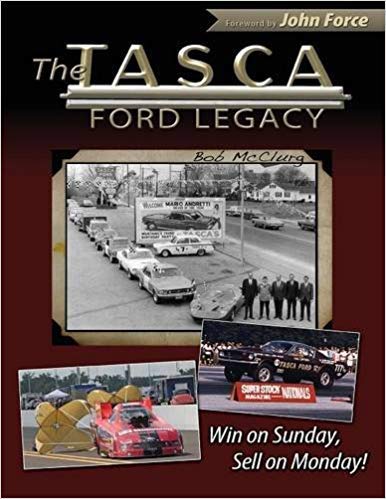 The Tasca Ford Legacy is a family history, one that any genealogist would be proud to have researched and produced. But in fact Bob McClurg set out to write an automotive history. He succeeded admirably due in part to his own skills but also because of the story that was there waiting for him to tell.
In the business of owning/operating automotive dealerships it is not uncommon for a son or daughter to succeed the parent as owner-operator, especially when the family name is on the sign outside. There are even a few dealerships where a third generation has subsequently become the owner-operator. The Tasca story is exceptional no matter the perspective, for the life and business principles that patriarch Robert F. Tasca, Sr. practiced and then imbued in the young men and women of his ever-growing family set in motion a multi-generational dynasty that extends beyond the owning-operating of dealerships.

His maxim that “each customer will be satisfied” contributed to the sixty-plus years of business growth and success. It takes that special something to build a single Ford agency located in the tiny state of Rhode Island into what Ford would come to formally recognize as its number one Lincoln-Mercury dealer.

Tasca Senior wasn’t just in the business of selling and servicing new cars; he was a true gearhead. One of his passions was motorsports, specifically Super Stock. But he didn’t just contribute a few dollars and paste a sponsorship decal on someone else’s entry. He built an entire race shop with dedicated crew, drivers, transporters, etc. and was a hands-on participant in brainstorming the development of ever-better and quicker machines. It is, of course, these cars, many of which have become collector’s items themselves, on which McClurg focuses his attention and in the process tells the bigger story too.

Prior to this book your commentator was not aware of Robert Tasca, Sr. or his fuller story. McClurg’s book permits us to meet a man whose personal ethics were key to his business successes for Tasca truly made the car buying and owning experience pleasurable for its customers and not just platitudes or ad slogans. That each successive Tasca generation, which now includes grandchildren and cousins of the third generation and with members of the fourth coming on strong, has continued to conduct their personal and business lives by the founder’s code, engendering similar customer loyalty at the helm of the even larger Tasca Automotive Group—selling the full Ford family of vehicles including Mazda, Jaguar, etc., and adding Chrysler, Dodge, RAM, Jeep and another dealership devoted just to trucks—is, as said at the outset, remarkable as readers of this generously illustrated book will appreciate page by page.

This review appears courtesy of the SAH in whose Journal 278 (Jan/Feb. 2016) it was first printed.

Posted Under: Automobiles, Racing, Rally, US | Author: Helen Hutchings | No comments yet