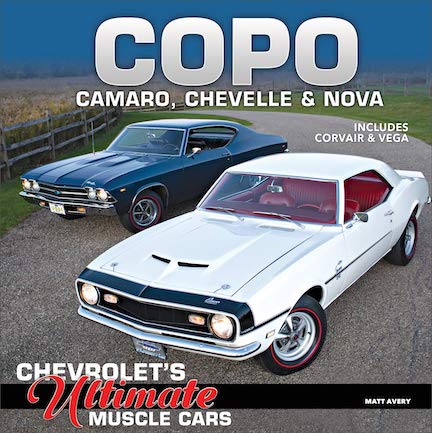 Tom Hoxie, with whom your commentator was acquainted during the years he headed Western Area Chevrolet public relations, had worked in the Central Office in the 1960s and well into the ‘70s. In his book American Muscle published in 1990 author Randy Leffingwell quoted Hoxie as he explained that COPO “was set up for fleet sales. A buyer would come to us wanting fifty or 100 vehicles with some sort of special equipment. We had a committee that would spec out the vehicle, set a price and bid it back to the buyer. Vince Piggins, Chevrolet’s racing liaison, was an astute fellow and he figured since there was a whole system in place he could make this work to benefit the company.”

Those origins of COPO muscle were cemented when an enterprising Chevy dealer came up with a special order, convinced eleven more of his fellow dealers to join the “network” ordering/stocking and selling the 100 special-order Corsa Corvairs as required by the SCCA to permit them to run competitively in stock classes. That dealer was none other than Don Yenko.

As author Matt Avery continues his profile of various COPO Chevys, other names instantly recognizable to those familiar with this aspect of automotive history join the story and become part of the narrative—Nickey, Baldwin-Motion, drag race champ Dick Harrell known as Mr. Chevrolet, Chevy dealer Fred Gibb, and others.

Avery does a very credible job presenting the quick cars he’s chosen to profile with clear writing and good detail on each. He’s also alluded to, and included, some of the intrigue that was going on behind the scenes. As an example, the highly respected and able Vince Piggins was an engineer attached to Chevrolet. Yet the named company he worked for, Southern Engineering and Development Corporation Operation known as SEDCO, indicated no GM, much less Chevy, association. But if you wrote to him his address was the GM Tech Center in Warren, Michigan!

Ordering cars through or via COPO ended as the 1970s began. The engineering side of the story was told by engineer/author Paul Van Valkenburgh in his Chevrolet—Racing? Fourteen Years of Raucous Silence! 1957–1970 that was published in 1972 by Haessner and Associates and re-released as a second edition by the SAE in 2000.

But the mystic of COPOs never really faded. Thus, commencing in 2011, and every year since including the current 2019 models, Chevrolet has purposely built just sixty-nine Camaros each model year that proudly wear badging indicating they are COPOs. All are specially equipped and intended to be eyebrow-raising “go fast” machines for sportsman drag racers. It’s Chevrolet’s way of paying tribute to Vince Piggins, Don Yenko, and Fred Gibb who did so much to keep Bowtie-awareness front and center all those years ago.

Now, with this book, Matt Avery has made his contribution to expanding details of the COPO story to include specific extant vehicles in words and pictures for readers of this nearly third decade of the 21st century.