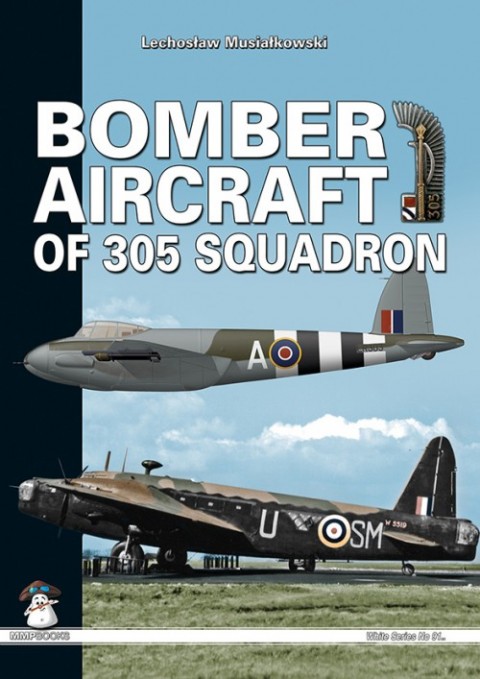 Aircraft you know, in a context you probably don’t. The 305th was the last of four Polish bomber squadrons that operated as part of the British RAF. Active from 1940–47 they flew Western aircraft out of England and later France into The Netherlands and Germany.

If you know your books, one look at the cover tells you this is an MMP book which means it’ll have an Eastern European angle. Specifically this is a title in the White Series and that means a greater focus on operational and logistical matters than technical minutia. Usually it also means personnel lists, pilots’ profiles and the like but that is not the case here.

The squadron’s principal trainer and war planes are described in the order in which they were taken into service: the Fairey Battle, Vickers Welligton, B-25 Mitchell and de Havilland Mosquito with the various versions of the Wellington dominating the narrative. Two closing pages show various Me262 and He119s as well as a V1 launch ramp, and it is those photos, or rather their photographer, Gabriel Miłosz, that are the reason this book exists. He served in the 305th during the entirety of its existence in various photo-related roles and ultimately as head of the photo section. He photographed anything and everything, leaving behind 1000 or so negatives. For decades his prodigious output has shown up every now and then in books such as this but Musiałkowski has probably dipped into the well the deepest. There are photos from other sources here as well, one in color.

MMP books always have the model builder in mind and thanks largely to the Miłosz photos, the diorama builders are striking gold in this one: field operations, ground equipment, munitions, crashed aircraft, maintenance—lots of things to keep busy hands busy. As expected, there are a number of color profiles, here by Marek Radomski (no 3-views or technical drawings but quite a lot of nose art). While some readers may think that the attention given to aircraft markings is just overblown, this book is a perfect example that accurate modeling depends on the work of the historian: the squadron’s first batch of aircraft, the Fairey Battle, was so mediocre that replacement Wellington heavies were on order before anyone could be bothered to even put full squadron markings on the Battles (mostly serial numbers only; the squadron actually never had an official badge). If you didn’t know this, or had proper photos to consult, you’d be painting your aircraft all wrong.

In some ways, books of this ilk are so geared towards the specialist reader that the generalist or newcomer really isn’t given much by way of a point of departure or context. There is, for instance, no Introduction or background as to the role of foreign fighters in the RAF. The Brits certainly saw their Polish comrades in a different light than, say, Americans or Canadians. Consider a report (not referenced in this book) by the CO of RAF Swiderby regarding the top training scores of a navigator in the 305th: “. . . You will note that the latter’s report is excellent and provides us with yet another proof, if one is wanted, that the Poles are not only enthusiastic fighters but also earnest learners, with brains and capabilities equal if not superior to our own.” A bit condescending, no?

We often bemoan that proofreading/spelling in MMP books is less than perfect; this one is an exception.