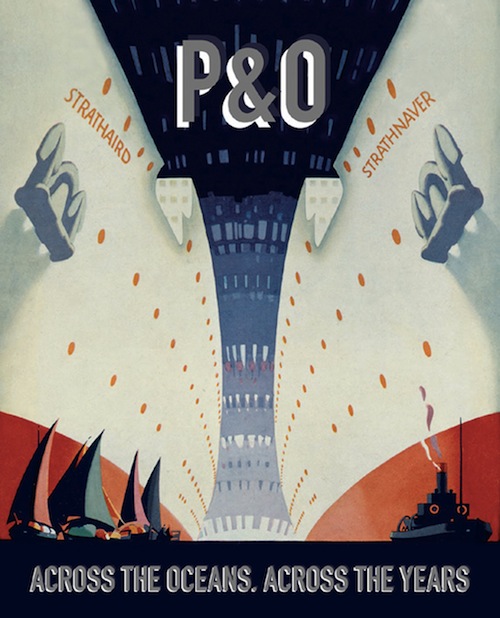 If you have any sort of wanderlust in your bones you’re probably not even going to get past the rows upon rows of ship profiles on the endpapers without traveling in your mind to some of the exotic places after which the P&O ships are named. Mooltan, Peshawur, Nagoya. Soudan. Moldavia. The spellings may have changed over time, but you know these places.

From the Achilles (1838) to the Zira (1972), the names of the more than one thousand ships in the P&O inventory (2600 for the entire group) over its 175-year existence have exhausted the alphabet several times over. Just recently the public in Australia and New Zealand was invited to name the two newest ships, and from over 30,000 suggestions (from Abracadabra to Zenith) Pacific Aria and Pacific Eden were chosen. Well, different names for different times . . .

This marvelously illustrated book is meant to showcase the “P&O way of life” as it relates to the company making its way in the world and a traveler making his way across the seas. Subtitled A Pictorial Voyage the book weaves together hundreds of illustrations from the archives of P&O Heritage—posters, fine art, ship models, period photos and assorted ephemera—and very vivid text to tell the story from the firm’s founding in 1836 into the 1970s.

Mail service is what put the Peninsular & Oriental Steam Navigation Company on the map (opium helped keep it there). Today’s IM generation may simply not appreciate the enormous importance letters had in a time when that was the only form of communication, and an exceedingly slow and often unreliable one at that. As curator of the P&O Heritage Collection co-author Cox was also able to source many personal recollections from passengers and personnel from president to dock worker to flesh out the story. Artmonsky, who opened an art gallery in her retirement and specializes in British design in the first half of the twentieth century, has written on subjects from prints and printers to artists, designers, and their patrons. 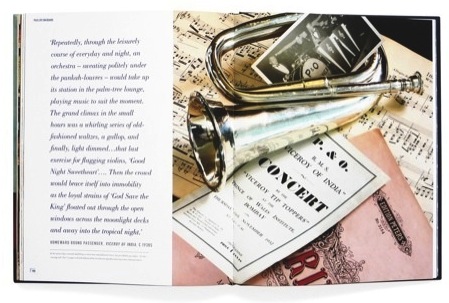 Among the several books released on the occasion of P&Os 175th anniversary, this is certainly the prettiest and the most well-rounded look at what the firm is “about”—but if it is detail about boats and routes and technical minutia you need, this won’t be your first choice nor should this be the publisher to expect it from; this is an artistically made book with a predominantly art-related approach. To that end, the book ends with catalog raisonné-style notes on the paintings and quotation references. (There’s also a Selected Ships list but it is very short and being in alpha order doesn’t help the reader get a sense for the changes in the hardware, technology, or capacity.) Very nice Index too.

If this thorough book is too much to buy by the boat load, know that Artmonsky wrote a “light” version that same year, a 64-page booklet for Shire (ISBN 978-0747811701); those little books always surprise and impress with how good a story they manage to tell on so little space.

Posted Under: Art, Artists and Design, Maritime, Other Genres, Travel | Author: Sabu Advani | No comments yet