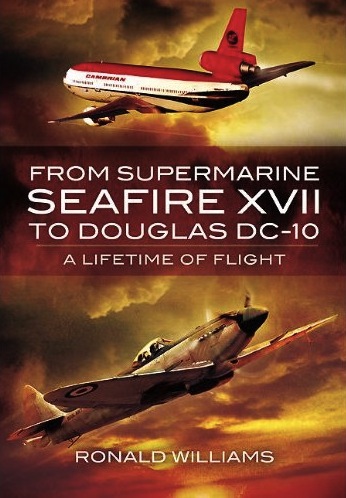 Although this is a book written by a pilot for pilots, there is much in the text to interest those of us who merely fly as passengers but in this very different post-9/11 world have no opportunity of visiting the cockpit and seeing pilots at work.

Ronald Williams was lucky enough to be selected as a National Service trainee pilot in December 1953 and so was able to sample the thrills of flying the Seafire, a navalized version of the well-known and beloved Spitfire and then to be converted onto its jet-powered successors. Navy pilots have always required certain basic skills and flying as a National Service pilot in the postwar Royal Navy was certainly challenging, with some quite alarming accident rates.

The quality of the Fleet Air Arm’s (FAA) early jet aircraft left a lot to be desired, in particular the Attacker jet fighter that still had a tail wheel configuration. Fortunately, three British inventions in the 1950s, the angled deck, steam catapult, and mirror landing aid substantially reduced carrier accident rates from the 1960s onwards. These important inventions were also adopted by the U.S. Navy.

Williams chose not to extend his two years in the FAA and used the last months of his National Service to take the necessary exams that would allow him to obtain a UK commercial pilot’s license and look for a job in civvy street.

This book is largely the story of his career as an airline pilot. Not for him the seamless move into one or other of Britain’s then two nationalized airlines, British Overseas Airways Corporation and British European Airways (now merged into British Airways), but starting off flying modest 8-seater de Havilland Doves with no co-pilot.

In telling this interesting story, Williams cleverly interposes his description of his career path of flying bigger and faster airliners with descriptions of some of the technical aspects of flying in the pre-automated era. What is the Instrument Landing System, what is a Ground Controlled Approach, how do you prepare an airliner for a flight? What are V1, VR, and V2?

One incident in William’s flying career stands out in terms of danger, stress, trauma and career hiccup, an aircraft ditching at night. His description of the events leading up to the actual successful ditching have that awful inevitability.

Eventually he joined Caledonian Airways led by Adam Thomson and flew as a 707 Captain. As part of the inevitable rationalization peocess, Caledonian was eventually merged into British Caledonian and was finally taken over by British Airways. He retired as a DC 10 Captain.

The 6- page Appendix includes some very well worn aeronautical jokes. There are 5 pages of good illustrations but no Index.