Birth and Evolution of Hot Rodding 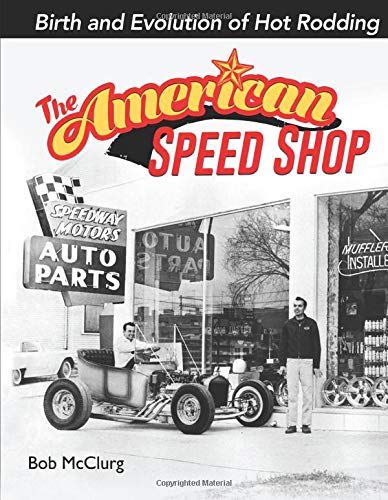 The American Speed Shop captures the flavor of the times as it relates highlights of the Birth and Evolution of Hot Rodding and profiles a number of the at-one-time more ubiquitous American speed shops.

It is most generously illustrated with just shy of 400 images. However, in order to cram all of them onto the allotted number of pages in addition to author Bob McClurg’s words, many are printed smallish. Hence the reason behind showing you this wonderful composite of images put together by publisher CarTech to make up the book’s endpapers (below). 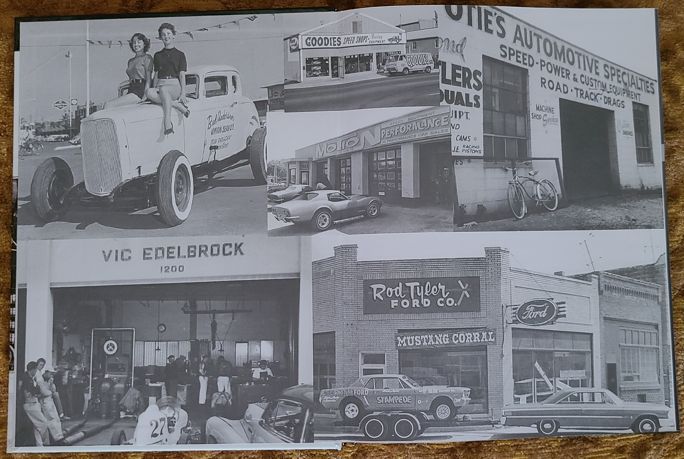 The cover features none other than the legendary Lincoln, Nebraska “Speedy” Bill Smith’s Speedway Motors. Though both Bill and his business and life’s partner, wife Joyce, passed in 2014, they had established well before their magnificent Museum of American Speed that is situated across the parking lot from their very much alive and thriving Speedway Motors speed shop headquarters and warehouse. Today, their four sons continue to conduct the business and “guide the destiny of the 68-year-old, mail-order, speed-equipment powerhouse” and also the 150,000 square foot Museum of American Speed. 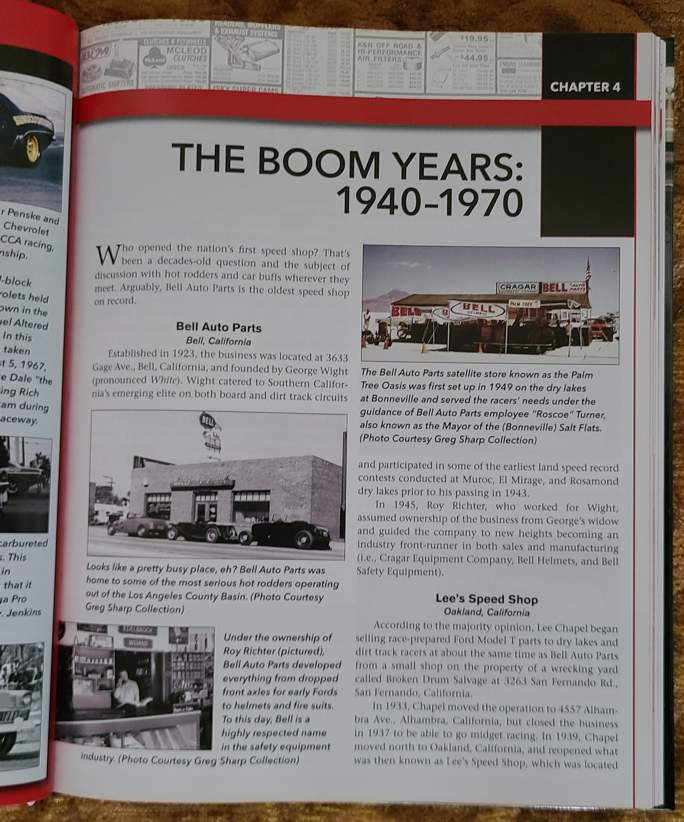 The Specialty Equipment Market Association, better known by its acronym SEMA, is covered followed by a chapter called “Mass Marketing” which includes a place in Chattanooga, Tennessee called Honest Charley. Originally established in 1948 by Charley Card, today it is under the guiding hand of owner Corky Coker who also owns the Coker Tire Company.

Today’s highly visible, due to its strong internet presence, Summit Racing is also given a segment in this chapter. But there’s no mention of another modern-day business that logically ought to have been given at least a sentence. Manny, Moe, and Jack were the faces of Pep Boys. Today it is a coast-to-coast chain having grown substantially since its 1921 founding. Of a total of fifty stores located in the continental US, thirty-seven have dedicated store space with stocked shelves—and sometimes a dedicated specially-uniformed employee too—set up as its modern-day speed shop and so indicated by special signage.

The “Lost Speedshops” chapter gave McClurg an opportunity to interview several of the one-time speed shop owners. Included in this chapter are two about which much has been written. One is the subject of an entire book reviewed on this site; see Motion Performance: Tales of a Muscle Car Builder. The other, Nickey, is shown with its instantly-recognizable-by-the-hat (if you are of an age to recall their famous customer) actor Dan Blocker, one of the stars of the television western Bonanza, in the two-page spread immediately below. 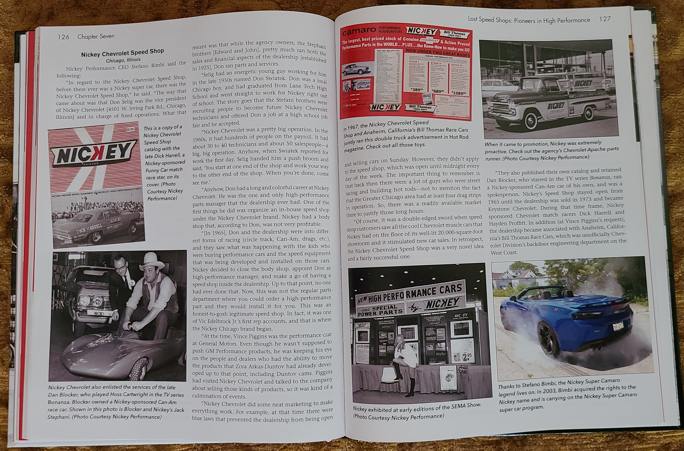 The book has no index but it does have an appendix that presents “Speed Shops Past and Present” in alphabetical order. McClurg does write that undertaking the creation this list was daunting. He added, “I’m fully aware that I will have missed a shop or three. For any . . . I missed, I apologize. Hopefully I found most of them.”

That mea culpa does, however, point up some unevennesses that were surprising to this commentator. For example, in a sidebar in “The Lost Speed Shops” chaper, McClurg presents some reminiscences from members of the Road Kings car club. Bob Muravez, more widely known by his drag competitor moniker of “Floyd Lippencostt Jr”, talks fairly extensively about Rich Cholakian’s Glendale Speed Center. Yet in that back of the book appendix Glendale Speed is nowhere to be found. Another that’s talked about in some detail in the text, but is nowhere to be found in the alphabetical appendix listing, is the previously mentioned Honest Charley.

There’s one speed shop that is in the alphabetical appendix but apparently McClurg had too little knowledge of it as there is no text telling of Quincy’s. It was located on Wilshire Boulevard in Santa Monica for 30 years after opening in 1949 and also, for a time, had a second location in the Palisades. For a number of its earliest years it was one of only two places in all of Southern California with a dynamometer available to do work for any paying customer—the other being at Ak Miller’s. Quincy’s owner, Bill Cox, employed a lad on weekends and after school with a bright and very fast future. Craig Breedlove, who was already handy with the tools, worked as an installer at Quincy’s while still attending Venice High School.

All in all, this book is a start at compiling information on speed shops into a single volume. Hopefully it will find sufficient reception (read buyers) that a sequel or updated version will eventually be issued.

Birth and Evolution of Hot Rodding

Porsche Home »
« 1994: The Untold Story of a Tragic and Controversial F1 Season