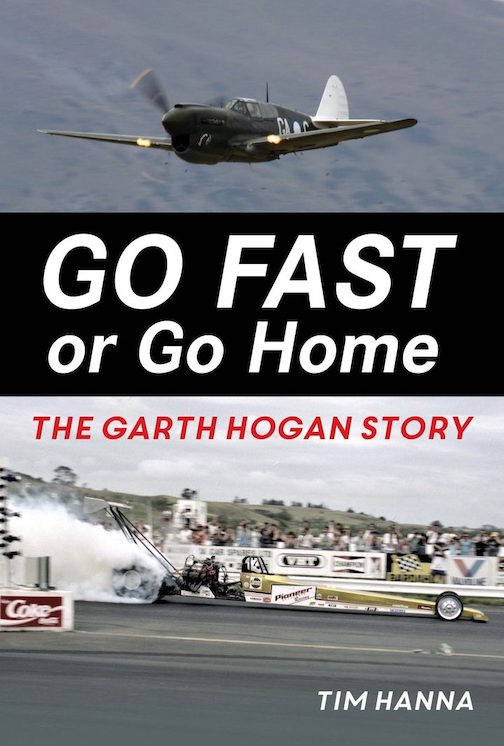 Hanna also wrote a biography of John Britten, the talented Kiwi engineer and artist who designed and built one of the world’s finest motorcycles, the Britten V1000. Both these could have been hard acts to follow but with another New Zealander, Garth Hogan as his current subject, he has yet again come up with winner. It’s a big book. Hogan has crammed so much into his life that the author needed almost 500 pages to tell his story. And it’s quite a story.

The early part of the book concentrates on Garth’s father Ron, a talented, unconventional and somewhat taciturn man who seemed to live in an emotional straightjacket. The complicated father/son relationship is central to the Hogan story as it influences and impacts the young man and the successful adult.

Naturally, given the title of the book, there is a lot about Hogan’s need for speed: speedway; dragsters; hot rods; Bonneville records; and warbirds, but Hogan’s business success and his work for the sport, and causes that were dear to him, are well covered. He owned and ran a dragstrip, he served on the FIA Drag Racing Commission, and on the Warbirds over Wanaka Trust.

The information about dragsters was a revelation to me as I had no idea about the work and costs involved in running a Top Fuel car. It was common to replace rods, pistons, exhaust valves and the clutch between runs. It’s the same old story . . . the more you spend the faster you go, and the less time you get actually racing.

Hogan’s business success is integral to his story as it allowed him to pursue the pleasures and support the causes that were important to him. Most car enthusiasts would have rattled a can or two of VHT paint in their garage—Hogan was the man who took up the distribution of that product in New Zealand. It was the start of the success of his company, Pioneer Auto Parts. Then, when he wanted to restore a P-40 warbird rescued from the jungle of New Guinea, that project became the catalyst for the establishment of Pioneer Aero Restorations. His skirmishes with moribund bureaucracy, a belligerent tax department, and incompetent IT companies highlight the challenges to his business success.

The author makes the most of Hogan’s adventures in all the areas of his life, the first man in New Zealand under six seconds for the quarter mile; drag racing records in New Zealand and Australia; flying warbirds; aerobatics and formation flying in a Yak; and a class record at Bonneville, of 189.785mph, with a Ford flathead-powered ’34 Highboy roadster.

There are two sections of photos with some spectacular shots of dragsters and warbirds as well as period pictures from Hogan’s childhood and youth. There’s a stunning head-on color shot of a P-40 spitting flames and empty cartridges from two Browning machine guns.

This is an engaging and well written book that keeps you turning the pages. Its appeal will extend beyond New Zealand enthusiasts to a broad range of readers as it tells the story of an interesting, complex, and successful individual. Sadly, it lacks an index to its wealth of information, but it’s a good read.