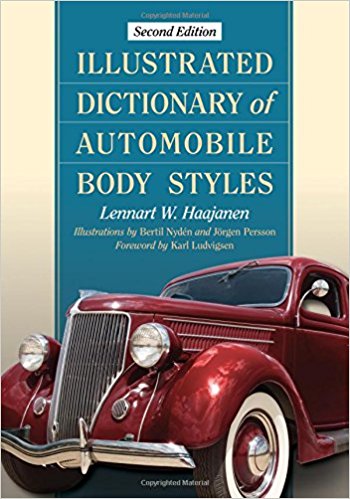 A book as specialized as this seems a surprising candidate for a second edition but, clearly, the first one hit its mark. Written by a retired technical consultant and secretary of the Swedish Bugatti club it was well received at its first appearance in 2003, and now we have a revised and expanded edition with a dozen more pages and about two dozen more illustrations.

Some of the terms used to describe particular body styles were inherited from the era of coachbuilding prior to the motor age, whereas each year that elapses now witnesses new additions to the terminology of styling. Not uncommonly, the use of these names has been applied loosely, not only by enthusiasts and dealers, auction houses and authors, but even on occasion by the grand old old coachbuilding companies themselves. All the more credit, then, to the author’s diligence in making sense out of confusion and establishing benchmark terms of reference.

It is helpful too that where variations have been found in the languages of countries such as France, Germany, Italy and even the UK, they are listed when separate distinctive styles are described. For the purposes of this book, the clear line drawings are better suited than photographs would be. Whilst many of these are side elevations, others are three-dimensional. Where appropriate, the text goes into considerable detail to elaborate on the features and history of that particular design or styling feature. Many entries have been expanded to cover the actual form of a body: for example center door saloon, and actual parts of bodies now are included, such as scuttle, roll top, D-front, and B-pillars.

So many of the names are a delight in themselves—landaulet and cabriolet; park phaeton and brougham come across as fugitives from verse. Brash terms such as notch-back and sports-utility vehicle may lack that poetic ring, but they serve their purpose, and—who knows—may themselves acquire enhancement with the passage of time.

This important and practical book merits a place on the shelves of every car enthusiast. Karl Ludvigsen has contributed a nicely pitched Foreword, and Haajanen has dedicated the book to none other than Denis Jenkinson, the famed “Continental Correspondent” of Motor Sport magazine (UK), a pioneer of the classification of existing historic racing cars into categories ranging from original and authentic to resurrection and facsimile (distinctions, incidentally, that not only have semantic but sometimes legal consequences).