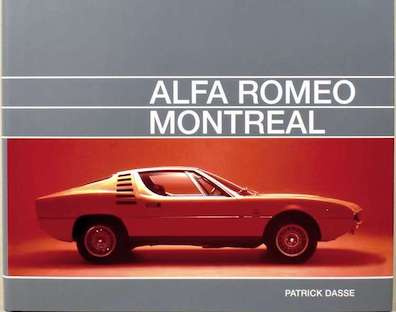 (English / German) Pull one of the better Montreal books from the shelf, say, Bruce Taylor’s (which actually has a companion volume of just photos) and you’ll find that there is minimal overlap among the historic photos with this one. Author/publisher Patrick Dasse probably took that same look because it is surely no coincidence that even when he does show the same scene (cf. airfreighting the concept cars to the Expo ‘67 in Canada, later the Geneva launch etc.) he chooses mostly different shots from that series. In fact, most of the photos in this book have not been previously seen in print.

Produced between 1971 and 1977 the Montreal was quite the niche car (incidentally, this book says Alfa’s official number is 3747 units) and has remained pretty much a sleeper (and thus entirely affordable still today) throughout its life.

Bottom right: this is what we call precision parking…

Fans of Italian design in general and of the work of Marcello Gandini in particular will of course recall that he did just one year earlier the Lamborghini Miura. Put one next to a Montreal (Taylor in fact offers just that view) and you’ll see why Gandini described the Montreal as having the “Miura’s DNA,” and Gautam Sen in his epic Gandini biography praises the Montreal as “achingly beautiful.” Regardless of its sales numbers, for Alfa the Monti was one more way to amortize the R+D effort they had put into configuring its 105 Series the way they had. The biggest change for the Montreal (a Tipo 105.64) is that an 8-cylinder engine had to be stuffed into a space originally sized for a 4-cylinder and this in turn brought with it a host of mechanical and coachwork changes.

The Montreal book is one of the six in Dasse’s Tipo 105 series which we described in detail elsewhere. These books pretty much assume that you have other Alfa literature to consult for in-depth detail because Dasse’s books are all about the photos. Other than a basic summary and specs (performance, production numbers and the like) there is no text besides photo captions. That said, the absence of text should not lead anyone to think that someone just slapped a photo album together and called it a day; Dasse and his collaborators clearly know the car/s and their pertinent details. This is evident in the photos choices, and how they are captioned. Example: minutia such as the reasons behind the change to curved exhaust tips, or the correct direction of chrome strips on trim pieces. There is a lot more to discover than the captions call out, and experts (restorers or the like) will of course appreciate the many detail shots of the cars as new.

It is the documentary nature of the photos that move the needle here, and also the quality of their reproduction in print (another Dasse specialty). Also, while original Alfa (and Bertone) period photos make up the bulk of the offering there are also items from other collections, such as motorsports photographer Reinhard Klein, Quattroroute magazine, German Alfa dealer Michael Heine, Actualphoto, the Italian National Auto Museum, and Juhani Anttila of the Alfa Romeo Club of Finland who has been a resource to a number of Alfa authors and written his own book, Alfa Romeo Suomessa [Alfa Romeo in Finland] 1950–2000, ISBN 952-91-2040-0.

Among the goodies here are photos of a prototype Alfa did not at all want publicized (above) and the really rather too sparsely documented Autodelta (below) competition cars that ran in Groups 3 and 4.

As we said elsewhere, these books are probably most appealing for the connoisseur, both of the car and print. The books are a joy to pick up and peruse again and again.