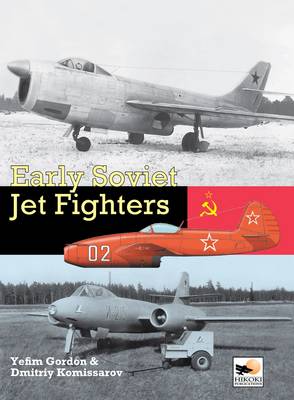 At 2.04 kilograms (4½ pounds) this heavy tome is worth its weight in gold to anyone interested in the technical details of early Soviet jet fighter development. When 822 photos, drawings, blueprints, schematics, specification and flight performance sidebars are combined with 100,000+ words of pointedly descriptive text, there is little left for the reader’s imagination to ponder as far as construction and performance details are concerned.

The book opens with an introduction that gives the background of jet engine development in the Soviet Union from roughly 1939 to 1945. There wasn’t much happening during that time period, and nothing that was advanced enough to help the Russians during World War II. The war’s end provided the Soviets with captured German BMW and Junkers jet engines to reverse-engineer. As an added bonus, in 1946 the British sold the Soviets examples of the fully operational Rolls-Royce Nene I, Nene II, and Derwent V jet engines. Far superior to the German jet engines, these British powerplants provided the reliable boost Mikoyan, Yakovlev, Lavochkin, Sukhoi and Alekseyev needed to design and build competitive fighter planes.

The book is divided into five main chapters, one each for the five Russian airframe designers mentioned above. Within each chapter the very first attempts to design a jet-powered fighter are dissected, with every development thereafter chronicled until rough performance parity was reached with the western powers in the early 1950s. Mikoyan’s and Yakovlev’s prototype creations won approval from the military and were developed into production warplanes, with Mikoyan’s designs eventually dominating. All the successes and failures from all five designers are discussed and pictured. A total of 75 carefully scaled color drawings will give modelers an excellent start on recreating any of these early jet fighters.

For the purely technically minded, the data in this book concerning the power and life expectancy of all the early jet engines is interesting and informative. The German jets were lacking in power, unreliable, and required overhaul every 10 hours or so. The British jet engines had twice the power and lasted 100 hours between overhauls. Some of the purely Russian-designed engines are discussed, but figure in only tangentially because they were non-starters from a reliability and power standpoint. Airframes were designed for those engines, but the home-brewed Russian creations were slow getting out of their development phase, necessitating the substitution of reverse-engineered German, and then Rolls-Royce engines.

Airframe development is also discussed in great detail. All the designers started out with either single-engine pod-and-boom shapes, utilizing subsonic straight wings, or twin-engine designs, based, in part, off the successful shape of the German Me 262 jet. Once the swept-wing concept took hold, Soviet performance took a great leap forward and the speed of sound became breakable. The various airfoil shapes and swept-wing angles are documented, as are all the other requirements for a successful combat plane, including ejection seats, weapons, range, communication gear, pressurized cockpits, maintainability in the field, and ease of operation by the average pilot.

Not discussed, other than a hint here and there within the text, is the human side of the story. In fact, there is no “story” here beyond what ministerial paperwork and industry records tell us. Much, if not all, of what is written about seems to come from official documents, leaving those not familiar with the social history behind the five designers in the dark about who did what to whom. I doubt they lived in blissful harmony, but that story will remain untold, in this book at least. This lack of “personality” makes this book an unlikely candidate for the sale of movie rights to Hollywood. Early Soviet Jet Fighters has no human-interest angle for eager script writers to exploit for a gripping tale of struggle and strife within the Soviet aircraft industry. “Just the facts” are what you get, and for me, that’s enough.

I thoroughly enjoyed this book and highly recommend it to anyone interested in early jet plane technical history. However, for those just interested in a casual way about early Russian jet development, this book may be overkill. It is filled, from beginning to end, with lots of data and pictures, which I greatly appreciate, but not much else. If you can’t get excited about things like wing incidence and dihedral, then it’s doubtful you’ll find this book as riveting as I did.

Much of the information for this book comes from the personal collection of author Yefim Gordon [yefimair@gmail.com]. He graduated from the Kaunas Polytechnic Institute in the USSR in 1972, and has been researching Russian aviation history for over 40 years. He is also a professional aviation journalist and photographer, having authored and co-authored more than 100 books on Soviet aviation.

Co-author Dmitriy Komissarov [sdkom@inbox.ru] is a Moscow native who has himself translated and co-/authored more than 50 books. He’s also written many magazine articles in two languages on Soviet and Russian aviation.

This beautifully bound and well-designed book opens with an Introduction, then Acknowledgements, followed by five chapters, one each for the five designers, ending with a relatively short technically-oriented Index. Polygon Press Ltd. in Moscow designed the layout of this book, and they did a great job. The graphic balance and coordination between the text and relevant photos, schematics, and sidebars is excellent and makes what is basically a textbook into a beautiful example of the book designer’s art. Here and there within the text a math typo will occur when a conversion between the metric system and US-style fractions is made. For example, 12 mm does not equal 3/64″ but is nearer 31/64″. Many photos seem slightly grayer than intended, as there are many instances where small items called out in the picture captions are not discernible to the eye due to a lack of sharp reproduction. Obviously, what’s being mentioned must have been visible in the original photos, so the fall-off in quality must be laid at the feet of the printer, which in this case is Melita Press in Malta.

I expect this book to be a steady seller for years to come. It may not hit the New York Times bestseller list anytime soon, but it’s difficult to imagine that another book could ever cover the same ground more effectively or beautifully. I’m glad I own it!