Behind the Wheel: The Great Automobile Aficionados 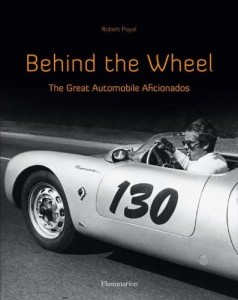 “Man invented the car—and then he immediately kept it for himself. But does loving machines necessarily incline you to misogyny? To admit to this would be a betrayal, but to deny it would be hypocrisy.”

The quote, from the introduction to chapter 2 which presents Camille Crespin du Gast (whom the author calls The Impertinent Amazon), is a taste of the cerebral approach Puyal takes to his subject. The lives of 54 people—five of whom of the female persuasion—are enlisted to tell stories of wo/man’s relationship with the car through the ages. It isn’t explained, nor does it matter, why these 54 or why this number; what they have in common with each other and any number of “notables” and civilians is a particularly prodigious relationship with the car. There is no point in naming all names here save to say the cast of characters is eclectic, increasingly so as the years unfold, from pioneers to major and minor captains of industry (cf. Renault, Ford, Pagani) to racers to cultural commentators (cf. Sagan/author, Lelouch and Tarantino/film), even a gangster whose only “distinction” is that the gang who used him as the driver of their getaway car considered his job so important that they named the gang after him.

In other words: this book is not intended as a stern, fact-laden academic treatise on vehicular transport. International readers should know that the book, written by a Frenchman and published simultaneously in French (Les fous du volant) and English, features mostly European—and especially French—protagonists. While some may find that obscure others will recognize the special appeal of meeting characters one doesn’t know already.

Puyal is a 30-year veteran of motorsports journalism and writes for several motoring magazines in France, covering all aspects of the car and its industry. Moreover, he likes to drive, and in fact regularly tests sports cars. He can thus relate on various levels to the people whose stories he is telling here. It seems fitting that a book celebrating the advances of automobility would begin with a car nicknamed “Jamais Contente”—Never Satisfied because this aptly named machine embodies the very theme of the book: faster, bigger, better, prettier. Onwards, upwards. Jamais contente. This car, incidentally, which entered the annals of history as the record-breaking mount of pioneering Belgian racer Camille Jenatzy (1868–1913), was powered by electric motors—is it coincidence that the book also ends with an electric car?! (Apropos of nothing in particular, it is also amusing to note that the publisher’s offices are on quai Panhard et Levassor, a name the history-minded reader will recognize as that of one of the earliest firms to offer a motorcar.)

Divided into five eras, each of the biographical portraits runs two to four pages. Not that the author’s choices need justification—his are as good as any, so long as the reader realizes the subjective element. It’s easy enough to see why the poster boy for speed, actor James Dean, makes an appearance but the inclusion of US film director Quentin Tarrantino may have more to do with his visibility on the French cultural scene as the Cannes film festival’s favorite son rather than any singularly articulate statement about cars in his movies (nor do his private cars or his erratic attendance at motorsports events bespeak any particular hankering for speed). With speed being the overarching theme here, it is no surprise that more than half of the personalities should have a professional motorsports connection.

At over 12” tall the book format is eminently suitable to the full-page portrait photos that precede each bio. There are also many period photos of machinery, mostly b/w, suitably captioned, and nicely reproduced on substantial matte paper. The photo selection is worthy of note! The reader with a well-stocked motoring library will find few new images here but that selfsame reader would be the first to realize that the photos Puyal did choose are an ideal fit with the text and strong visuals. Clearly, a good deal of thought went into the photo editing. The same attention to detail is evident in the choice of distinctive typefaces and also the typesetting: justified two-column text without needing to resort to hyphenation and still avoiding ungainly, inconsistent letter- or wordspacing are extraordinarily elusive goals to achieve! In that regard it is worth noting that this publisher has been around since 1876 and has many a beau livre in their catalog.

Original in concept and execution, the book goes far beyond a mere cookie-cutter paint-by-numbers approach to automotive history. The Index lists people and marques; photo credits are listed at the back.