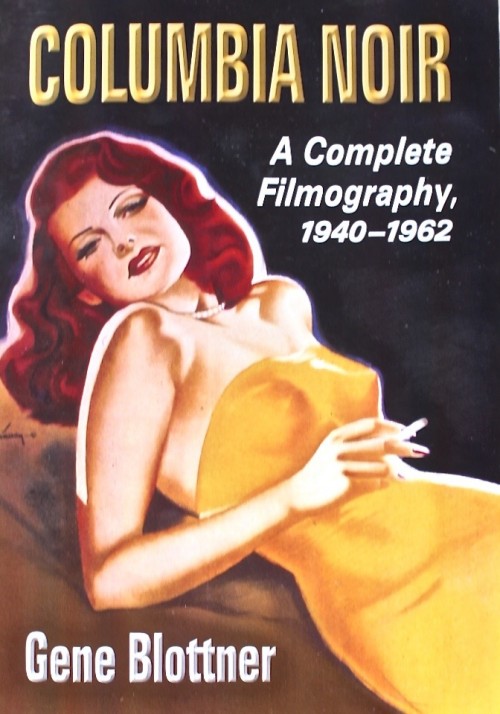 Film Noir has more to do with storytelling-style than with actual lighting but it was actually the latter, specifically the cost of achieving brightly lit scenes, that gave rise to a genre that enabled budget-strapped film studios to turn grittiness into art. Columbia Pictures—now as part of the Sony Pictures Motion Pictures Group considered one of the Big Six—was once one of the Little Three and definitely had to watch its expenses. For the same reasons that Columbia produced more westerns than any other major studio, they produced a large body of film noir. This is the most likely reason why Blottner chose to focus only on the films from Columbia—he doesn’t give a reason in the book. The subject of noir is vast, so we have to assume that he was faced with the problem of selection and this was the logical choice.

Because this book is essentially a reference book, it is difficult to review. That doesn’t mean that we do not like it. We do. But there is not much to add after praising the author, a retired pharmacist and prolific film historian (who else would compile a complete filmography for a relatively unknown oater star, Wild Bill Elliott?) for his tenacity of research and the admiration he inspires for what is obviously a happy obsession: Although Blottner acknowledges seven colleagues for assistance in “obtaining information for this book,” the text more than suggests that not only had he viewed these 160-plus films personally, but viewed them attentively and critically. His love for the movies, his love for noir, flashes through every page. 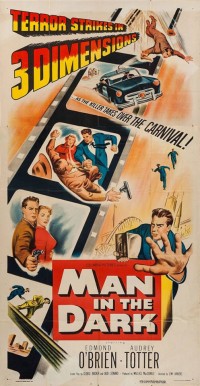 At 6.8 x 10 inches, the book is the perfect size for its well-thought-out organization. For each film, the following information is given in the following order: title, year of release, a complete listing of the cast; the credits for the director, screenwriter(s), the cinematographer and the rest of the crew; filming dates and locations; a source (novel or story) if there was one; a note on the color process if not the usual, defining black-and-white; running time; a detailed telling of the plot; notes and commentary; a glance at the reviews, perhaps from Variety or Motion Picture Guide; and a summation. The summations highlight the vigor of Brottner’s interest, often adding quirky formative or production factoids; the rest underscore the attentiveness and depth of his scholarship. His comments on the films typically are bread-and-butter

(“This noirish melodrama has, on the surface, much to offer.” “This noir is well-done and well-acted and will hold the viewer’s interest.”), but these too add to the overview and the factual account of each film.

Oh, yes, and lest we forget: For each entry, Blottner has chosen a quotation from an advertisement, review or a bit of film dialog and places it floating above each entry: “DOUBLE RATES FOR WOMEN…because a woman is always double-trouble!” “HERE’S WHY THEY CALL TIJUANA AMERICA’S BARGAIN BASEMENT OF SIN!” These entice, and they offer a dash of tongue-in-cheek humor. We see this as a plus for Blottner—he takes this stuff seriously, but not that seriously. Also, we like the illustrations throughout, the stills, advertisements and lobby cards. No “courtesy of” or “copyright” are listed, making us believe these are from the author’s collection. 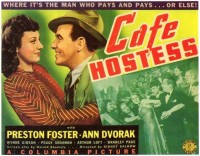 Columbia Noir has two appendices, one listing the films alphabetically, the other chronologically, a preface and an introduction. In the preface, the author circumscribes noir and explains his inclusion of some westerns and science-fiction films—and it is here that one hopes he “hasn’t missed a title.” The introduction defines noir, offers a brief history of its origins, rise and demise, and this is done competently. As mentioned, there is not much descriptive or analytical to say about this book but we readily add a final note: It should be a part of every public library, and it would be quite at home on the shelf of any fervent film buff. And if you are a devotee of Ted Turner’s Classic Movies network, go online—don’t hesitate!—to order your copy today. 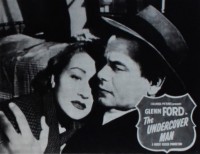 Posted Under: Youth and Young Adult (YA) | Author: Bill Wolf | No comments yet

A Chronology of Aviation »
« Brighton Belles, A Celebration of Veteran Cars