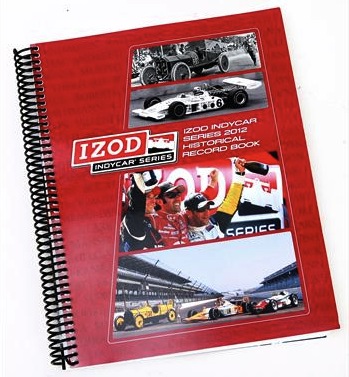 A genre of automotive literature often overlooked is the press guide and its companion, the record book. More often than not, the press or media guide for an organization has at least a section devoted to the history with some listing of its various records for ready reference. From time to time, one of the racing bodies feels compelled, for whatever reason, to produce a comprehensive record book. When that organization is IndyCar (or INDYCAR), especially given its troubled past, it is well worth paying attention to such a publication.

The apparent genesis for this historical record book was INDYCAR CEO Randy Bernard’s desire to incorporate the records of all the various “North American Indy car racing” series into one single, inclusive volume. While long overdue, and very much appreciated, such an endeavor is fraught with complications, not to say peril. For instance, the different series/sanctioning bodies—IndyCar, IRL (Indy Racing League), ChampCar, CART (Championship Auto Racing Teams), USAC (United States Auto Club), and the A.A.A. (American Automobile Association)—have their own separate and distinct histories and methodologies for keeping records. To throw them all into the same pot and treat them as all the same would, some would suggest, give de facto recognition to the IndyCar organization as having a linear provenance stretching all the way back to the early days of “Indy car” racing at the turn of the 20th Century.

The rather dubious task of pulling together Bernard’s vision of fell to Steve Shunck and Tim Sullivan who work for IndyCar and the Indianapolis Motor Speedway, respectively. Needless to point out, these are not disinterested parties by any measure. In 2011, for the recently reorganized Indy Racing League as the IndyCar organization and its newly christened Izod IndyCar Series, Shunck and Sullivan produced the first edition of such a record book. The 2012 edition is simply an update incorporating data from the 2011 season, meaning that conceptual problems evident in the 2011 edition remain unresolved. A key, and very complex, issue is that the various sanctioning bodies each marching to their own distinct beat makes an apples-to-apples treatment unachievable, especially if the subject is approached, as the authors do, merely by merging statistics and not addressing the historical issues involved. The nuance inherent in the latter is liable to affect the balanced interpretation of the former. (For an in-depth analysis of the issues see Rear View Mirror Volume 10 No 1.)

Whereas the book’s first two sections (“All-Time Indy Car Records” and “All-Time Indy Car Race Winners”) are plagued by a fundamental inability to disentangle conflicting and contradictory history, the treatment of the post-1947 seasons is, thankfully (save for some minor errors unavoidable when combining data from such a multitude of sources) generally free from questionable interpretation, if only because there is none—it sticks strictly to statistical data. The cardinal exception, related to the preceding paragraph and revisited below, is the coverage of the 1946 season (pp. 329/30) in the “Driver Performance and Index Charts” section.

Before going further, let credit be given where credit is due. The authors certainly deserve praise for taking on this mammoth task. That one may now find the statistics—one hesitates to say “history” given that history and statistics or race data are very different things altogether—for IndyCar, IRL, Champ Car, CART, USAC, and A.A.A. events resting cheek by jowl is something of a minor miracle given that acrimony still simmers in some quarters regarding several of the series. It should be noted, however, that the CEO of IndyCar and the authors are not being altogether altruistic in bringing together the statistics of several formerly warring parties.

Not to mince words and bluntly state what is obvious even to the untrained eye, this is really an effort by IndyCar to seize control of the history of what it refers to as “North American Indy car racing” and bend the narrative to what IndyCar wants it to be—and needs it to be in order to legitimize its claim to supremacy. Surely, this is why the book is absent any narrative, explanation, exposition, or discussion of the supposed historical records found between its covers.

That the authors themselves are clearly aware of the various problems regarding the often convoluted and conflicted history of “North American Indy car racing” makes many of the historical errors found in the book even more irksome, annoying, and exasperating than if they were committed in simple ignorance! The authors note, for example, that the A.A.A. did create a “National Track Championship” in 1905 but then say “. . . it is believed this championship may have been abandoned as A.A.A. did not recognize it in subsequent years.” There was, indeed, a National Motor Car Championship that the Racing Board of the A.A.A. sanctioned which consisted of a number of short 5–10-mile events from early June with an event at Morris Park in the Bronx to the end of September 1905 with an event held in Poughkeepsie. A close study of contemporary accounts fails to reveal any indication that the championship (won by Barney Oldfield) was “abandoned.” As to why this championship seems to have been at least “forgotten” by the A.A.A. is beyond the scope of this review and remains something of a mystery even if there are several possible explanations—none of which are suggested by Shunck and Sullivan.

While one may quibble that any omission of this championship scarcely constitutes the tossing of any brickbats at the authors, it should also be kept in mind that the book is (1) supposedly a historical record book and (2) the existence of this series and its events has been established and accepted within the automobile racing historian community, therefore, it warrants some form of coverage. That it came as a revelation and initially there were many doubters is, undoubtedly, the source of the authors’ reluctance to include it in the record book. However, much is now known regarding the series and is readily available to even the casual Internet surfer.

The listing entitled “All-Time Indy Car Champions 1909–2011” carries with it a caveat stating that with the exception of 1916, the champions listed for the 1909–1919 seasons really were not champions crowned at the time, but, rather, titles that were bestowed retroactively as a result of some dreadful revisionism that occurred during the latter part of the 1920s by someone on the A.A.A. Contest Board and then resurrected in the early 1950s. To their great credit, the authors do give Gaston Chevrolet his rightful place as the 1920 national champion, something which was stripped from him during the revisionist plundering of the sport’s history. Sadly, many reference works still credit Tommy Milton as being the 1920 national champion.

Which brings us to the 1946 season and a true can of worms that the authors fail to adequately address, simply providing another one of the notes indicating that they recognize that what they are publishing is wrong—but are doing it anyway. Shunck and Sullivan only list six events for the 1946 national championship season in the sections devoted to race winners and driver performance. They also list Ted Horn among those champions with the fewest victories during a season beginning with the 1946 season: zero. According to the authors, Horn shares this dubious distinction with Tony Bettenhausen (1958), Tom Sneva (1978), and Scott Sharp (1996). Shunck and Sullivan provide two final points standings for the 1946 season, one not showing Tommy Hinnershitz at all and the other having him in fifth place in the standings. The 1946 national championship season consisted of a remarkable 77 events. Of these, Ted Horn won 19 of the feature races or main events on his way to easily winning the championship—which he would have won whether it was 77 events or only the six events run to the “championship formula.”

This, naturally, leads to another fundamental issue with this historical record book: despite carefully making note of the caveats regarding the ways in which the history has been appropriated in order to be able to tell a story with a particular slant, Shunck and Sullivan simply ignore all that when it comes to listing the winners, all-time and seasonal. As mentioned, in 1946 Ted Horn won 19 races and five more over the 1947/48 seasons, which adds up to 24, but he is credited with only those from the latter two seasons. Similarly, Ralph De Palma is credited with 24 wins, but none of them were during a season when the AAA awarded a concurrent championship. There are many other such irregularities.

Some might complain that pointing out such errors is akin to picking at nits, or that for many years these alleged “errors” have long been accepted and are to be found in countless books and articles. To that we say that just because many think something is right doesn’t make it so! Factual truth is not a numbers game. That Messrs. Shunck and Sullivan demonstrate that they know better and still publish what is historically wrong negates any merits this supposedly “historical record book” possesses.

The authors have been offered an opportunity to respond to my specific criticisms but have yet to do so. It is thus likely that the next edition/s will continue to contain the same errors. If you do purchase this book, do it with the knowledge that significant portions fail to meet the standards expected of an actual historical record book.

IBSN: None that can found!

Car Hops and Curb Service: A History of American Drive-In Restaurants 1920–1960 »
« The Glory of Goodwood: The Spiritual Home of British Motor Racing