The Story of the Deadliest Pandemic in History 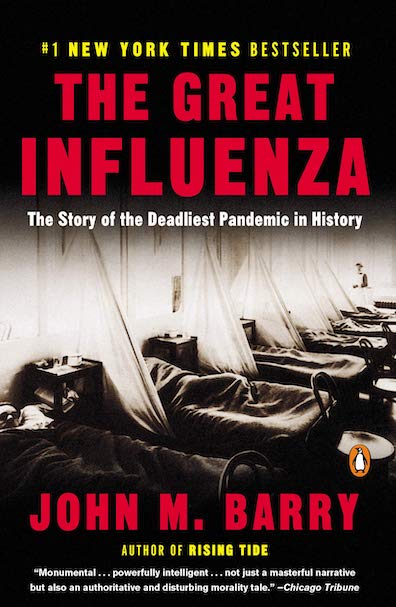 I am writing this review on October 12, 2020, more than a half year into the Covid 19 pandemic. This book could hardly be more timely. You could say that it is too timely for comfort—or too prescient, too scary. Isn’t there some adage about how the failure to read history may lead, down the road, to unpleasant consequences?

John M. Barry (b. 1947), educated at Brown University, is a respected, award-winning historian; he has researched and authored several books before this one. The Ambition and Power: A True Story of Washington and The Rising Tide: The Great Mississippi Flood of 1927 are his best known. The 79 pages that comprise his notes, suggested bibliography and index show the breadth and depth of his research. Although scholarly, the book reads like a Michael Connelly detective novel or an Adam Nevill horror story.

In the introductory chapters, one startling fact stands out—that before 1918 the state of medicine in the United States of America was an abomination, lagging far behind European standards. If you could pay the tuition to any number of unlicensed, unregulated medical schools, attend lectures and pass some examinations—without ever seeing a patient or cutting into a cadaver—you could put out your shingle and attend to the health concerns of your neighborhood. Scientific research in medicine was virtually nonexistent. In 1901, John D. Rockefeller Sr. lost a grandson to scarlet fever; in the same year he funded the opening of the Rockefeller Institute for Medical Research. American medicine gradually became better, and with the spur of the influenza pandemic, became exponentially better.

The pandemic most likely started in Haskell County, Kansas, spreading soon to a nearby Army cantonment and from there spreading quickly to other military installations. Then the country. Then the world. Although by 1918 World War I was winding down, President Woodrow Wilson felt the need to immerse America into a massive war effort, drafting men by the thousands and promoting war bonds; he authorized and championed vigilante groups, affiliated with official government agencies, to persecute those perceived to be slackers. If you could afford to buy war bonds but did not do so, for example, you risked incarceration, physical beatings and even death. Neighbors spied on neighbors. Wilson’s focus on the war also led to at least partial government control of railroads and industry. His fervor to sell war bonds eventually led to a cruel public disaster in Philadelphia, Pennsylvania. To encourage the selling of war bonds, a huge parade was planned. As the pandemic began to decimate the City of Brotherly Love, officials were warned that such a parade would be an absolute disaster. The parade was held. Thousands thronged the streets to watch and cheer. Not long after, steam shovels were needed to bury the dead. This is but one of the horror stories found in Influenza. Wilson never once referred to the pandemic. Does this remind anyone of today’s state of affairs?

The heroes of the book are the scientists who worked unflaggingly to define the disease and find curative solutions. Simon Flexor, Oswald T. Avery, Anna Wessel Williams, William Park—these and more are mentioned and surveyed. The descriptions of the inexorable tedium and feverish desperation of the researchers fill page after page. A silver lining? As mentioned, the quality and strict regulation of medical practice in America greatly improved as a direct result of the severe dedication of these medical researchers. They should be honored and remembered!

Influenza, then, is a nonfiction tale of terror, political corruption—and the heroics of a cadre of truly good people. A book for our current season.

The Story of the Deadliest Pandemic in History

Posted Under: History | Author: Bill Wolf | No comments yet

Searching for Charlie, In Pursuit of the Real Charles Upham VC & Bar »
« Napalm: An American Biography