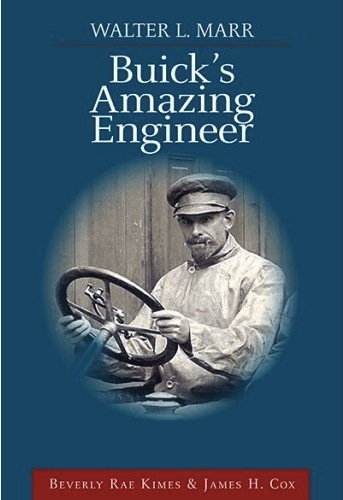 While reading Walter L Marr, Buick’s Amazing Engineer, I found myself reflecting on the process of unearthing the details of history. Thus prompted, I read again the words and looked at the images relating to Marr in the Larry Gustin and Terry Dunham authored Buick, The Complete History, and reread sections in the books Billy Durant (published in 1984), David Buick’s Marvelous Motorcar (published in 2006), and even looked again at the collectible/out-of-print The City of Flint Grows Up (published in 1945).

Poignant moments awaited me as tying the past to the present continued. This book about Marr is written by Beverly Rae Kimes. Her co-author, James H Cox, is her husband and this book is their first, last, and only published collaboration—last because Beverly died less than a year after the book’s publication. In the foreword, Bev wrote that the book had begun as the project of another, Richard Scharchburg.

Scharchburg was a Thompson professor of industrial history and the Director of the Kettering/General Motors Engineering & Management Institute (GMI) Alumni Historical Collection in Flint, Michigan. His effort as a published author was the superlative 1993-SAE-published Carriages Without Horseswhich dealt with the Birth of the American Automobile Industry and the Duryea brothers.

In the Marr book acknowledgment Beverly wrote, “The idea for this book belongs to Dick Scharchburg…a longtime colleague. He approached the biography of Walter Marr, Buick’s first engineer, the same way…as he had that of Duryea…However, Dick never completed his (Marr) research.” Scharchburg’s research was shipped from Michigan to Beverly in NYC after she accepted the challenge to carry it on and eventually publish. It was impossible for me not to notice—Beverly died in same month, nearly to the day as had Scharchburg, he in 2000, she eight years later. Each had been 68 years old.

So, what of this biography of Walter Lorenzo Marr?

That it is well and entertainingly written should surprise no one. Also not surprising is that publisher Racemaker Press has created handsome pages between hard covers, illustrated with period images, reproduced in sepia and black and white. While on-going research may eventually add nuances further defining Marr, this book presents a new perspective that is well supported by cited documents which in some instances are actually reproduced on the book’s pages.

Previously published articles described Marr and David Dunbar Buick’s on-off relationship intimating that it was exacerbated by both men having short-fused temperaments. Kimes’ book enables one to realize that actually Marr and Buick were intrinsically quite different. They were brought together by shared engineering and automotive interests and abilities but their motivations, personalities and outlook were noticeably/markedly different. Buick was proper but distant with people, whereas Marr formed personal and professional relationships and friendships easily—with many of those extending for the duration of lifetimes. Marr was known and remembered for his impeccable and dapper appearance both in grooming and choice of clothing. There’s no such enduring impression of Buick.

Time and place, coupled with ability and events gave Buick’s name enduring recognition. The company carrying his surname was the cornerstone of corporate GM, yet the man died in virtual poverty and anonymity. Marr, by contrast, made notable engineering contributions and gained sufficient business success that even in retirement in Florida he was able to engage in philanthropic pursuits. Yet today Marr does not have the name recognition of Buick.

More revelation is found in the words and photos surrounding a Buick company memo dated September 16, 1916. It refers to EXP-256, the design of a Buick V-12 engine and the construction of “these two jobs”. Although Buick (the company) apparently never seriously considered introducing a twelve-cylinder car, the craze for them was strong and Marr, working with now-legendary engineer/designer Leo Goossen, was at the forefront of this thinking and design. One of those V-12 Buicks that Marr and Goossen created was fitted into a modified 1915 Buick Model D-55 chassis. Marr subsequently negotiated with Buick and thus obtained personal ownership of this vehicle. Then, by instilling a pride in his offspring and heirs, he guaranteed that the vehicle would survive. Today it is not merely intact but fully restored and driven.

This fresh look at the beginnings of Buick and GM during the formative years of America’s automotive industry is instructive and interesting. This is one of those books that shouldn’t just sit on the shelf—it needs to be read both for enjoyment and edification.

Copyright 2009, Helen V Hutchings (speedreaders.info)
(rewritten and adapted from review first published in August 2008 The Buick Bugle, the magazine of the Buick Club of America)